The honorary degrees are given annually to people for outstanding contributions in their field at the very highest level. 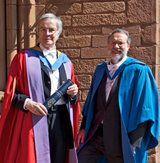 Nobel Physics Laureate (2005) Professor Theodor W. Hänsch, Director at the MPQ and Carl Friedrich von Siemens Professor for physics at the Ludwig-Maximilians-Universität Munich, has been awarded with an honorary degree (Doctor of Science) by the University of Strathclyde in Glasgow, along with Professor Claude Cohen-Tannoudji (Laboratoire Kastler Brossel in Paris) and Professor William Phillips (National Institute of Standards and Technology (NIST)), who received the Nobel Prize in physics in 1997. Also poet and translator Professor Seamus Heaney, winner of the Nobel Prize in Literature in 1995, was honoured by the University. The honorary degrees are given annually “to people who have made outstanding contributions in their field and who have achieved at the very highest level”. The award ceremony took place on May 4, 2011, in the festive Barony Hall of the university.

Photo: Professor Theodor W. Hänsch, new honorary Doctor of Science of the University of Strathclyde at Glsgow, with his presenter Professor Allister Ferguson

Professor Hänsch was born in Heidelberg in 1941. He studied physics at the University of Heidelberg, earning his doctorate in 1969. He went on to post-doctoral study in the United States, and was a professor of physics at Stanford University from 1975 to 1986. His research there included an early exploration of laser frequency comb techniques together with Allister Ferguson, who later became Professor and Deputy Principal at Strathclyde University. Since 1986 Professor Hänsch has been Director at the MPQ and Professor of Experimental Physics at the Ludwig-Maximilians-Universität in Munich. Since 2006, he holds a chair endowed by the Carl Friedrich von Siemens Foundation.

Professor Hänsch has received many scientific prizes and awards. Among others he was awarded the Gottfried Wilhelm Leibniz Prize of the Deutsche Forschungsgemeinschaft in 1988. In 2006 the Große Bundesverdienstkreuz mit Stern (Great Cross of Merit with Star) of the Federal Republic of Germany was conferred upon him. In June 2008 he became member of the 'Order Pour le mérite' which was established by the Prussian King Friedrich Wilhelm IV in 1842. [O.M.]