Ultrafast Look into Atoms and Molecules

New record in ultrafast metrology: Physicists at MPQ and the LMU Munich are the first to produce light pulses lasting only 80 attoseconds.

To observe the motion of electrons in atoms one has to be fast. The speed needed has once again been achieved by a team of physicists of the “Munich-Centre for Advanced Photonics” (MAP). In cooperation with their colleagues at the Advanced Light Source in Berkely (USA) researchers of the team of Professor Ferenc Krausz at Max-Planck Institute of Quantum Optics (MPQ) in Garching and Ludwig-Maximilians-University of Munich (LMU) and Prof. Ulf Kleineberg at LMU have produced the first light pulses lasting just approx. 80 attoseconds with ultrashort laser flashes. An attosecond is a billionth of a billionth of a second. This is the first time that scientists have advanced metrology into the temporal range below 100 attoseconds. This affords access to real-time observation of the fastest electron motions inside atoms, molecules and solids. Insight into electron processes can lead to the development of new light sources, exploration of the microscopic origin of serious illnesses, or gradual advancement of electronic data processing towards the ultimate limits of electronics (Science, 20 June 2008).

In the microcosm electrons move with awesome rapidity. Within just a few attoseconds the particles in atoms jump between adjacent atoms in a molecule or solid from one location to another. These jumps are the cause of light being emitted in the region of the visible, ultraviolet or X-ray spectrum. They are also responsible for deformation and resulting malfunctioning of biomolecules, or transmission of biological information in the nerves. Observation of such jumps calls for technologies allowing such short times to be measured. This is done with light pulses.

To generate attosecond pulses the Garching physicists use the strong electric field of flashes in the near, infrared laser light. In the hypershort laser flashes this field performs hardly more than a single strong oscillation with a period of approx. 2,5 femtoseconds (a femtosecond is 1000 attoseconds). That is: the light wave now comprises just two high wave peaks and a deep wave valley between them. The force exerted by the electric light field on the electrons is strongest at the summits and the lowest point of the valley, strong enough to liberate electrons are ejected from atoms−rare-gas atoms in the experiment at Garching. This leaves ion rumps. With the oscillation of the light field the force changes direction and very soon hurls the electrons back to the ion rumps.

The recolliding free electrons induce extremely fast electron oscillations which last just attoseconds and thereby emit light flashes of the same duration. These flashes are then in the region of extreme ultraviolet light (XUV, approx. 10 to 20 nanometers wavelength).

Controlled production of this single strong light oscillation within a hypershort flash now allowed the Garching research team for the first time to release electrons exactly three times during a single laser pulse. On returning to the ion they then emit exactly three attosecond pulses. Each femtosecond laser flash thus generates three attosecond pulses. One of these pulses has a particularly high intensity, providing more than 100 million photons in a period of just 80 attoseconds. This pulse is filtered out with special x-ray mirrors from Prof. Ulf Kleineberg, resulting in a single isolated x-raypulse of 80 attosecond duration. The new generation of attosecond pulses, with unprecedented brevity and intensity, owes its existence to the physicists’ ability to use their laser flashes to limit ionisation (release of electrons) to a single oscillation period of the laser light. 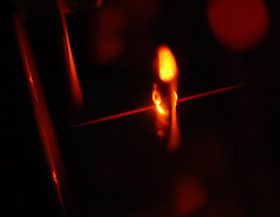 “Electrons are omnipresent in vital microscopic processes just as in technology. Their ultrafast motion governs the course of all biological and chemical processes, as well as the speed of the microprocessors constituting the core of computers”, explains Ferenc Krausz. Many of these processes, such as the energy transfer between electrons or the reaction of particles to external influences, can take place within just a few attoseconds. “With our light pulses we are making these phenomena more and more sharply visible”, adds the Austro-Hungarian physicist. Just as with high speed-photography the images from the microcosm are made all the sharper, the shorter the light pulses with which they are flashed. “By means of attosecond technology we shall one day be able to observe in real time how the microscopic motion of electrons in molecules initiates diseases such as for example, cancer. We shall likewise be able to switch electric current in atomic circuits with infrared light many trillionth times per second”, says Ferenc Krausz.  Thorsten Naeser 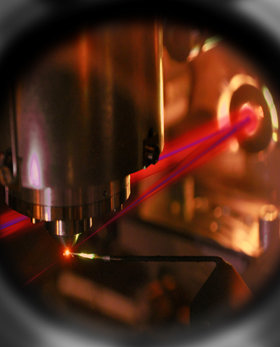 Vacuum chamber for attosecond metrology Attosecond pulses of extreme ultraviolet light (depicted as a blue beam) are focused by a mirror (right) on a jet of neon atoms effusing from a thin valve. At the same time an infrared beam is striking the atoms. Both beams in combination allow real-time observation of the motion of electrons in the neon atoms and measurement of the duration of the attosecond pulse. Photo: Thorsten Naeser Image editing: Christian Hackenberger