Novel system for the investigation of exotic quantum gases

Scientists around Prof. Dr. Theodor W. Hänsch and Dr. Kai Dieckmann (Ludwig-Maximilians University Munich and Max-Planck Institute of Quantum Optics Garching) have for the first time produced ultracold quantum-degenerate gases containing two different fermionic species, lithium and potassium (Phys. Rev. Lett. 100, 010401 (2008)). Quantum gases like these serve as models for simulating exotic properties of solids such as superconductivity and therefore improve our understanding of the underlying processes. Furthermore, the experiment provides a platform for the realisation of new states of matter.
Macroscopic properties of solids such as conductivity or magnetism go back to the quantum mechanical properties of their fundamental building blocks – electrons and atoms. In the past decade physicists have learned a lot about the underlying processes by studying dilute atomic gases as models. They take advantage of the extremely high purity and excellent controllability of such gases.

In the beginning the research focus was on bosons, particles with integer spin. As has been demonstrated experimentally in 1995, bosonic particles form a so-called Bose-Einstein condensate (BEC) at extremely low temperatures, a state in which the whole system behaves like a large super atom. Recently, however, the interest of scientists has shifted towards ultracold fermionic gases, which are more similar to solids. Fermions, particles with half-integer spin, must follow the Pauli exclusion principle, i.e. they have to differ in at least one quantum number. Therefore, they cannot form a BEC under normal conditions. In the presence of an appropriate magnetic field, however, two fermions can pair up to form a kind of composite boson. At certain magnetic fields, the resulting pairs are molecules and can form a molecular BEC. At other field strengths, the fermions form Cooper pairs, like the electrons in a superconducting solid, inducing a BCS (named after the physicists Bardeen, Cooper and Shrieffer) phase-transition of the gas. One main motivation behind this experiment is to investigate the continuous cross-over regime between these two exotic phases. The new platform will allow for the first time to create atom pairs consisting of two different fermionic species. This could lead to novel quantum systems that have so far only been predicted but never observed.

The generation of ultracold fermionic gases requires partly the application of different cooling techniques than for the creation of a Bose-Einstein condensate. The first step is the same for both cases: a cloud of up to several billion atoms closed in a vacuum chamber is irradiated with laser light from six directions. The energy of the laser light is tuned slightly below the resonance of the atoms. Thus only atoms travelling towards the direction of the laser beam can be excited. In the process, they lose kinetic energy and are slowed down. This laser cooling procedure cools the particles down to temperatures in the micro-Kelvin region. BEC formation takes place at temperatures of the order of some hundred nano-Kelvins. In order to reach these temperatures physicists transfer the atoms into a magnetic or optical trap and apply evaporative cooling: This cooling technique is realized by a continuous removal of the particles with the highest energy, which reduces the mean energy per particle. Via elastic collisions, the total energy becomes redistributed among the remaining particles, and the temperature of the whole system falls. At the temperature at which a BEC forms, typically only one thousandth of the initial amount of particles is left. For fermionic particles, however, the evaporation technique cannot be applied in the same way, as because of the Pauli exclusion principle collisions are strongly suppressed between identical fermions at low temperatures. But there is a solution to the problem: Collisions are prohibited only between fermionic particles of the same kind. Bosons and fermions, or different types of fermions may very well collide. If cold bosons are trapped together with fermions they can absorb the kinetic energy of the latter, and the fermions also cool down. This process is dubbed “sympathetic cooling”.

Based on this concept, the Munich group went one step further with the experiment described here: They put together the fermionic species’ lithium and potassium (at the same time as well as separately) and bosonic rubidium atoms in a magnetic trap. All atomic species had previously been cooled down to micro-Kelvin temperatures by laser cooling. Then, evaporative cooling was applied to the rubidium atoms. The kinetic energy of the fermionic species was reduced simultaneously by sympathetic cooling with rubidium, which works better for potassium than for lithium. It turned out that cooling of lithium is most efficient and only leads to the desired deep quantum degeneracy, if potassium is also present in the trap. Potassium, as the second fermionic component, acts as a catalytic cooling agent in this case. In another experiment, the scientists evaporated all the rubidium atoms from the three-species gas, to leave a pure fermionic two-species mixture.

For the first time an experimental platform provides mixtures of two different fermionic species and mixtures of bosons and fermions. Because of the purity of the mixtures fundamental theories can be tested. In addition, the system allows precise control of the parameters of the theories, e.g. it is possible to control the motional states of the two fermionic species independently as well as the type and strength of their interaction. Two research subjects appear to be particularly interesting: Ultracold molecules and the BEC-BCS cross-over. Ultracold molecules made of two different fermions are comparatively stable and may have a large electric dipole moment. This can be used to investigate novel systems with an anisotropic, long-range dipole-dipole interaction, e.g. for the simulation of anti-ferromagnetism. The availability of two different fermionic species in the system also offers novel possibilities for the investigation of the BEC-BCS cross-over, which may lead to a deeper understanding of high-Tc superconductivity in solids. [O.M.] 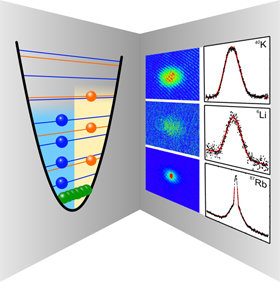 Figure: Left side: At ultralow temperatures (typically a few hundred nK) the fermionic gases form two interleaved Fermi seas and the bosonic gas undergoes the phase transition to a BEC. Right side: Typical false-color shadow images of the quantum-degenerate three-species mixture together with fitted density profiles.