An Interface for Quantum Computers

A network of distributed quantum memories that talk to each other – this could be the design of a future quantum computer. Prof. Gerhard Rempe and his team have now succeeded in setting up a key element of such a processor. As they report in the magazine SCIENCE (Science Express, 21 June 2007), they were able to map the quantum state of a single atom onto the quantum state of a single photon for the first time. Core element of this single-atom-single-photon interface is an optical resonator that contains a single Rubidium atom. In the first step the atom excited by a laser pulse gets quantum mechanically “entangled” with the photon it emits. Then the atom gets excited by a second laser pulse, again emits a photon, thereby transferring its quantum state onto the second photon. In this way the two photons emitted one after the other are entangled. By measuring the properties of the two correlated photons the successful transfer of information from atom to photon can be proved. The development of such an interface between a “stationary” quantum memory (the atom) and a “flying” photon is an important step towards realising scalable quantum computers.

Various quantum systems that successfully perform quantum computations have been around for several years. However, the existing systems contain only a few quantum bits (qubits) like atoms or ions that act as quantum memories, and cannot easily be extended to systems with many qubits. One idea to achieve scalable structures is a network made of many small quantum units communicating with each other. These units could be represented by single atoms, with the qubit encrypted in its internal state. If one maps this state onto the quantum state of a single photon, this can carry the information over long distances. 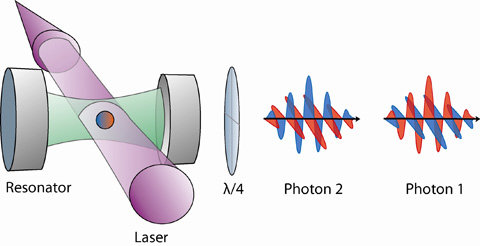 Such an interface between single atoms and single photons has now been built by MPQ scientists. The essential part of the new device is an optical resonator made of two highly reflecting mirrors containing a single Rubidium atom. The atom gets excited by laser pulses. Due to the strong atom-cavity coupling the excited atom emits one photon in a deterministic way, i.e. time, frequency and direction of emission are well defined. This is not possible if the atom would radiate in free space.

Upon each photo emission the atom has two possibilities to decay: Either it releases a photon of right-circular or of left-circular polarisation into the cavity. As a consequence, due to conservation of angular momentum, the remaining atom must rotate in the opposite sense, i.e. the atomic spin is pointing “UP” or “DOWN”, respectively. Being a quantum particle the atom is not very decisive and takes both paths at the same time. It then resides in a so-called “superposition state” in which both possibilities prevail with the same probability. The properties of the photon and the atom however remain strongly correlated during this process. They are therefore “entangled”, as this state is called in quantum mechanics. Now it has to be demonstrated that the quantum state of the atom can be transferred faithfully onto a second photon. Therefore with the help of a second laser pulse the atom is stimulated to emit a second photon. Now the “UP” state gets transferred into a photon of left-circular polarisation, the “DOWN” state onto a photon of right-circular polarisation. Hence all properties of the ambiguous atomic state are mapped onto the polarisation of the second photon. Thus, the two emitted photons get entangled with each other, while the atom gets disentangled. That this process indeed took place has been proved in the experiment by measuring the polarisation states of the pairs of correlated photons. By consequence, it is evident that both the atom-photon entanglement as well as the atom-photon state mapping work faithfully.

“With single atoms and single photons at hand, we now have for the first time an interface between a digital memory and a digital messenger for communicating quantum information”, Prof. Rempe explains. “In a next step we plan to superimpose photons from two atom-cavity systems in order to entangle two remote quantum memories. In this way we would obtain a first although small quantum network.” [T.W./O.M.]