It has been predicted that ionization of atoms in strong electromagnetic fields occurs via a quantum mechanical process: electrons overcome the attractive force of the atomic core by tunnelling through the potential wall. Now for the first time (Nature, April 5, 2007) a German-Austrian-Dutch collaboration around Professor Ferenc Krausz, Director at the Max Planck Institute of Quantum Optics, has succeeded in capturing this process in real time. Using ultrashort laser pulses the scientists were able to reveal distinct steps of ionization each lasting several hundred attoseconds. This result represents a milestone in gaining deeper insight into electronic motion inside atoms and molecules, which is relevant to advancing many areas of science, technology and medicine.

Everyday experience teaches us that surmounting a hill implies climbing up it (Fig. 1). Quantum physics knows another way. Objects can get to the other side of the hill without climbing: they penetrate the hill horizontally. This phenomenon, dubbed tunnelling, has been understood in terms of the wave-like nature of matter. For macroscopic objects its probability is very low, that’s why we have never observed it. By sharp contrast, in the microcosm particles may – with significant probability – “tunnel” through regions of space where they could not be according to the laws of classical physics (e.g. in the bowels of the hill in Fig. 1).

Just as a valley stabilizes the position of a body by gravity, the nuclear force binding protons and neutrons together to form the nucleus of an atom and the electric force binding (negatively charged) electrons to the (positively charged) nucleus to form an atom stabilize the position of these particles within a tiny volume of space. This stabilizing effect can also be represented by a valley, which physicists call a potential. Tunnelling through a binding potential is commonplace in the microscopic world: it is believed to be responsible for nuclear as well as electronic phenomena1 , but – because of its awesome rapidity – it has never been observed in real time. Until recently. By drawing on the newly developed tools of attosecond metrology, a German-Austrian-Dutch collaboration led by Ferenc Krausz managed to observe electrons as they tunnel through the potential binding them to the atomic core under the influence of laser light [1].

The key to this feat has been an intense pulse of red laser light comprising merely a few, well controlled oscillations of its electric field [2] and an attosecond pulse of extreme ultraviolet light [3] coming in perfect synchronism with the few-cycle laser wave. 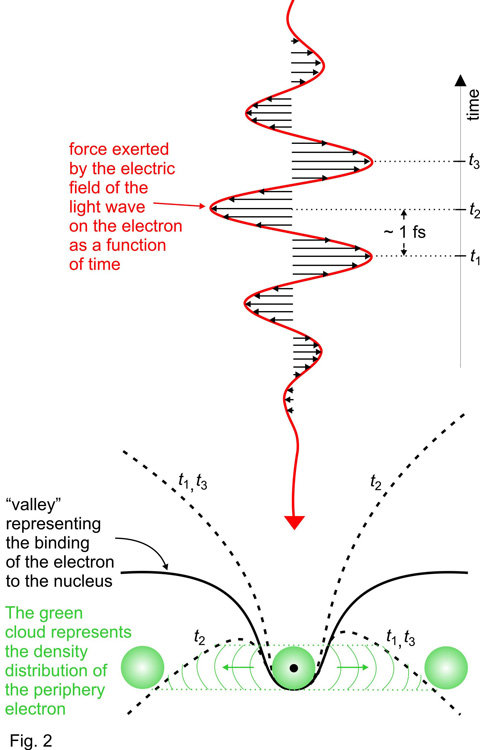 Acting on the atoms, the electric field of this red laser wave exerts a strong force on an electron at the periphery of the atom 2(illustrated by the green cloud around the atomic core in Fig. 2). The way this force varies in time is sketched in Fig. 2. This variation is extremely fast: it takes the force about one femtosecond (1 femtosecond is equal to one trillionth of a second, 1fs = 10-15 s) to switch direction – from pointing to the right with maximum strength (at time t1) to pointing to the left (at time t2) and then back to the right again (at time t3). At these moments the electric force of the light wave suppresses the atomic potential binding the electron to the nucleus (black line in the central panel of Fig. 2) on the right (at t1 and t3) or the left (at t2).

Whilst the slope is suppressed (i.e. around the most intense crests of the laser wave) the electron has an opportunity to tunnel through the barrier and escape from the atom. This opportunity for tunnelling exists near the wave crests only, i.e. within a brief time interval of only a fraction of a femtosecond. As a consequence, as the few-cycle pulse passes through the atom, the probability of the electron being set free is expected to increase stepwise: within a period of several hundred attoseconds (1 attosecond = one thousandth of a femtosecond, 1 as = 10-18 s) the probability rises each time the laser wave crest hits the atom, as sketched by the green line in the lower panel of Fig. 3. This is what theory predicted [4] but it has been awaiting experimental verification for over four decades.

No instrument can capture this inconceivably fast process directly. Measurable is only the final product, the atoms that are disintegrated into an electron and a positively charged ion after the laser pulse is over. The research team had to resort to a trick. They used a gas of neon atoms, in which the electrons reside in closed shells, are very tightly bound and resist the attempt of the laser field to free them. Only electrons hit by an ultraviolet light pulse are promoted to the periphery of the atom4 and can be detached from the atom via tunnelling. Thus only neon atoms that have first been “prepared” by an attosecond ultraviolet pulse can later be ionized by the red laser pulse. With an ultraviolet pulse lasting merely 250 attoseconds and precisely timed to the red laser wave, the German-Austrian-Dutch team were able to put an electron to the periphery of the atom at any instant during the laser wave with attosecond accuracy. Scanning this instant across the laser pulse and measuring the number of atoms ionized by the laser wave at each setting, they were able to reconstruct the temporal evolution of the “periphery” electron leaving the atom under the influence of the strong field of the red laser light. Just as predicted by theory and sketched in Fig. 3 (green line), the measurements revealed three distinct steps of ionization coincident with the central wave crests of the laser pulse and lasting less then 400 attoseconds each (see inset in the lower panel of Fig. 3). 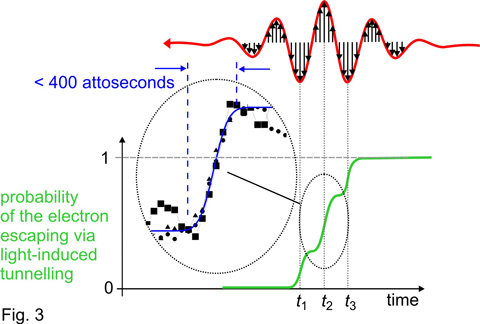 The experiments provide the first direct insight into the dynamics of electron tunnelling and reveal how light-field-induced tunnelling can be exploited for real-time observation of intra-atomic or intra-molecular motion of electrons. Gaining increasing insight into and control over the atomic-scale motion of electrons will be instrumental in developing compact sources of X-ray light, pushing the frontiers of microelectronics into the multi-THz regime and advancing biological imaging and radiation therapies

[1]In the fission of heavy nuclei, alpha particles consisting of two protons and two neutrons are believed to escape via tunnelling. In semiconductor nanostructures, electrons often tunnel through classically forbidden regions, being responsible for the functioning of a number of electronic and opto-electronic devices, e.g. for the negative (differential) resistance of tunnel (Esaki) diodes or for the emission of infrared light from quantum cascade lasers
[2]Physicists refer to this electron as an outer or valence electron.
[3]Holds true for red light. For blue light this period becomes shorter, for infrared light it becomes longer.
[4]Whilst another is ejected from the atom to result in a single-charged ion.