Professor Hänsch, Director at the MPQ in Garching, has received the Wilhelm Exner Medal of the Austrian “Gewerbeverein” in Vienna on November 19, 2012.

The award was presented to him by the Austrian Federal Minister for Science and Research, Prof. Karlheinz Töchterle, during a celebration at the Palais Eschenbach in Vienna. Prof. Hänsch was honoured together with the nano-scientist Prof. Friedrich Prinz, Stanford University (Stanford, USA), and the bio-technologist Prof. Robert Langer, Massachusetts Institute of Technology (Boston, USA).

The Austrian “Gewerbeverein” was founded in 1839 as an independent representative of trade, craft, industry, and liberal professions. Since 1921 this medal – which is named after the well known Austrian supporter of economic development and technology, Wilhelm Exner (1840 bis 1931) – is given annually to scientists and researchers “who have promoted economy in an outstanding way, directly or indirectly, through their excellent scientific contributions.” In the past 91 years the medal was awarded to 234 excellent scientists and researchers, among those 21 Nobel prize-winners. Some of the former recipients of the Wilhelm Exner medal have been, for example, famous researchers like Fritz Haber, Ernest Rutherford, Otto Hahn, Anton Zeilinger or Manfred Eigen, but also legendary engineers like Ferdinand Porsche, Wernher von Braun, Conrad Zuse, or Ferdinand Piech. 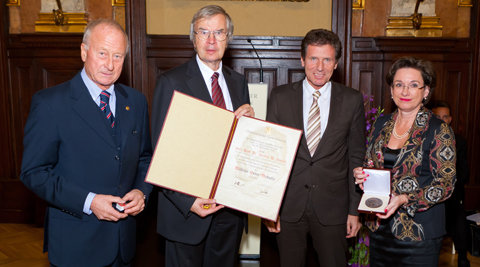 Information on the person:

Professor Hänsch has received many scientific prizes and awards. Among others he was awarded the Gottfried Wilhelm Leibniz Prize of the Deutsche Forschungsgemeinschaft in 1988. In 2006 the Große Bundesverdienstkreuz mit Stern (Great Cross of Merit with Star) of the Federal Republic of Germany was conferred upon him. In June 2008 he became member of the 'Order Pour le mérite' which was established by the Prussian King Friedrich Wilhelm IV in 1842. Olivia Meyer-Streng

More information on the award: