She has been honoured with this prize together with eight other female scientists at the LMU. 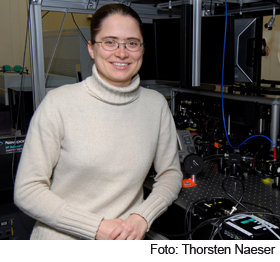 Max Planck famously remarked that women in academia were as unnatural a phenomenon as Amazons. However, this did not prevent him from accepting Lise Meitner – now ranked among the world´s most famous physicists – as his student and close collaborator. Yet even today, a hundred years later, it is very rare to come across excellent female scientists. One outstanding exception is Dr Zsuzsanna Major, a young Hungarian physicist working under Professor Ferenc Krausz at the Max Planck Institute of Quantum Optics (Garching, near Munich). With her recent appointment as an assistant professor at the Ludwig Maximilians University (LMU) in Munich she is one of the very few women in Germany working on a habilitation in physics. Together with eight other female scientists at the LMU she has recently been honoured with the Therese von Bayern Prize.

The 'Foundation for the Promotion of Women in Science at the LMU' is named after Princess Therese von Bayern (1850-1925). A granddaughter of the Bavarian King Ludwig I, Therese von Bayern was a scholar, explorer and writer. In 1892, at the age of 42, she was elected as the first – and still only – female member of the Bavarian Academy of Sciences. In memory of the courageous Bavarian princess, the Therese von Bayern Foundation Awards have been presented every three years since 1997 to young female scientists who pursue an academic career despite all the prejudice and obstacles they encounter in society. A prerequisite for obtaining the award is outstanding achievement combined with an academic career that may serve as an example to other women.

Zsuzsanna Major was born in Budapest (Hungary) on 18 April 18 1978. She grew up in Stuttgart where both her parents work as physicists at the Max Planck Institute for Metals Research. “As a result I was very familiar with the whole idea of physics and it was an obvious choice for me to study,” she points out. She began her higher education in physics by going back to her roots, to Eötvös Loránd University (Budapest) in 1996, and later, in 2001, obtained her Diploma at the Technical University of Budapest. An 'Overseas Student Award' from the UK made it possible for her to work on and complete her PhD thesis in Bristol at the end of 2004.

In 2005 she came to the Max Planck Institute of Quantum Optics where she joined the Attosecond and High-Field Physics Division of Professor Ferenc Krausz. Between November 2005 and October 2007 she was a Marie Curie Fellow of the European Union. Her research focuses on the development and application of high-power laser systems in particular with regard to laser-matter interactions at extremely high fields. Possible applications for this research lie in the use of new ultra-brilliant particle and radiation sources for significantly improving the diagnosis and therapy of certain cancer diseases.

Having obtained her PhD at a very young age, and being a winner of a Marie Curie Fellowship, Dr Zsuzsanna Major is exactly the type of woman scientist the Therese von Bayern Foundation is looking to honour. The presentation of the awards took place at LMU on 12 February 2009. Olivia Meyer-Streng