A Sisyphean Task for Polar Molecules

A new cooling method for polyatomic molecules paves the way for the investigation of molecular gases near absolute zero temperature.

The investigation of ultracold molecules is of great interest for a number of problems. It could lead to a better understanding of chemical reactions in astrophysics. Ensembles of ultracold molecules could be used as quantum simulators, single molecules as quantum bits for storage of quantum information. Whereas efficient cooling methods have already been demonstrated for the cooling of atoms down to the nano-Kelvin regime, these methods fail for molecules due to their rich internal structure. A team of scientists in the Quantum Dynamics Division of Prof. Gerhard Rempe at the Max-Planck-Institute of Quantum Optics has now developed a cooling procedure – the so-called optoelectrical Sisyphus cooling – which for the first time offers the potential to reach these ultralow temperatures even for complex polyatomic molecules (Nature, AOP, 14 November 2012).

The essential progress in the cooling of atomic gases came with the development of laser cooling techniques. Here, atoms are irradiated with laser light whose energy is slightly below the excitation energy of an electronic transition. Atoms propagating towards the laser beams come into resonance as a result of the Doppler-effect, causing them to become excited and experience a slowing force in the direction of the laser. This method is the basis for the application of subsequent cooling techniques that bring the temperatures down to the nano-Kelvin regime where the atomic gases can form new and exotic phases of matter.

For polyatomic molecules, the principle of laser cooling can no longer work due to the much greater number of excited states: each electronic state is composed of a large number of vibrational and rotational substates. However, a majority of molecules have an alternative property which can be efficiently used for cooling: as the electrons inside a molecule show different affinities towards the various atomic nuclei, the electric charge is not equally distributed. For example, as is widely known, the electrons inside water (H2O) feel more strongly attracted to the oxygen atom than to the hydrogen atoms. As a result the molecules show a negatively and a positively charged pole – they exhibit a strong dipole moment. In a static electric field this leads to a splitting of energy levels – depending on whether the dipole is oriented parallel or anti-parallel with respect to the field direction. This Stark effect (named after the German physicist Johannes Stark) is the key to the optoelectrical Sisyphus cooling technique.

In the experiment described here, the new cooling method has been tested for an ensemble of about a million polar CH3F molecules. The particles are pre-cooled to a temperature of around 400 milli-Kelvin and are trapped inside a special electric trap composed to a large part of a pair of microstructured capacitor plates. The field in the trap centre is homogeneous whereas it is strongly increasing near the boundary due to the microstructures. As the molecular dipoles interact with the electric fields, the Stark effect evokes a splitting of the molecules’ energy levels. A cooling cycle now starts by pumping molecules which are in the centre of the trap to an excited vibrational state using infrared laser light. Shortly thereafter, the excited molecules decay spontaneously back to the ground state by emitting photons. Of particular importance: during this process the alignment of the dipole with respect to the electric field can change. 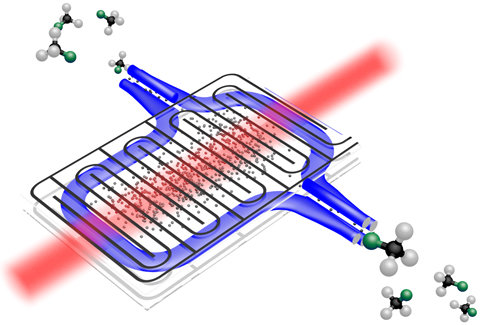 “For the successful cooling of the molecules two events must take place,” explains Martin Zeppenfeld, who conceived and together with coworkers built the experiment in the course of his doctoral thesis. “First, it is necessary for the molecule to end up in the more strongly aligned of the two Stark levels after the spontaneous decay. Subsequently, the molecule must move into the boundary region of the trap where the electric field is strongly increasing.” When the molecule moves up this ‘hill’ a large amount of its kinetic energy is transformed into potential energy. At this point the orientation of the dipole moment of the molecule is deliberately changed using radiofrequency radiation such that the molecule makes a transition back into the more weakly aligned Stark level. As the interaction with the electric field is now much smaller than before the molecule rolling back into the trap centre gains much less energy than it had lost by mounting the ‘energy hill’. “This is the analogy to the tedious work of the ancient hero Sisyphus,” Zeppenfeld says. “In our scheme the entropy in the system is very efficiently removed by the photons emitted during the spontaneous decay. However, the energy reduction itself is caused by the strong interaction between the molecular dipoles and the electric fields induced by the trap electrodes.”

By repeating the cooling cycle several times the molecules have been cooled down from 390 milli-Kelvin to 29 milli-Kelvin. “The new technique can be applied to a large variety of molecules as long as they are not too big in size and exhibit a large dipole moment,” Barbara Englert points out who works on this experiment as a doctoral student. As for possible applications, she envisions developing molecular circuits in particular in combination with superconducting materials. Rosa Glöckner, another doctoral student, is fascinated by the quantum many body aspects. “Our method offers the potential of subsequently applying other cooling techniques such as evaporative cooling. This should allow the nano-Kelvin regime to be reached which is necessary for the formation of a Bose Einstein Condensate.” It would be of particular interest to look at the behaviour of molecules in optical lattices because the long range of their dipole-dipole interactions would extend over several lattice sites.

There is still a long way to go until such applications become feasible. However, “we have quite a few possibilities to optimize the current experimental set-up, from improving the electric trap or the detection method to using a different species of molecules,” Martin Zeppenfeld points out. “Therefore we should be able to reach much lower temperatures in the near future. But even now our technique provides new ways of investigating polar molecules, for example with high resolution spectroscopy or by investigating collisions between trapped molecules in tuneable homogeneous electric fields.” Olivia Meyer-Streng