A collaboration of physicists from MPQ, LMU, Harvard and Caltech detect Higgs-type excitations in a low-dimensional system of ultracold atoms at the transition between different phases of matter.

The sudden breaking of symmetry plays a fundamental role in physics, in particular for the description of phase transitions that change the whole state of a system. One example is the spontaneous alignment of the atomic magnets in a ferromagnetic material that is cooled down below the Curie-temperature. Being governed by such a “global order”, the system can be excited to a collective oscillation, in which all particles move in a coordinated way. If the collective behaviour follows the rules of relativity, a special kind of oscillation can develop, a so-call Higgs excitation (named after the British physicist Peter Higgs). Such an excitation plays a key role in the standard model of elementary particles, where it is called a Higgs-particle. Also, solid state-like systems can exhibit Higgs excitations, if the collective motion of the particles obeys rules that resemble those of the theory of relativity.

However, the detection of Higgs excitations is usually rather difficult, because the excitations typically decay in a short time. Moreover, they are expected to be especially short-lived in very flat, so-called low-dimensional systems and it has been a subject of theoretical debate whether they are observable at all in such geometries. Now, a team of physicists from the Quantum Many-Body Division of the Max-Planck-Institute of Quantum Optics (Garching near Munich) together with theory colleagues from Harvard University (Cambridge, USA) and the California Institute of Technology (Pasadena, USA) succeeded in experimentally identifying Higgs excitations in a two-dimensional system of ultracold atoms (Nature, 26 July, 2012). “We are excited to study phenomena close to absolute zero temperature that usually occur at the highest energies”, Prof. Immanuel Bloch, leader of the Division, explains.

The experiment starts with cooling rubidium atoms down to temperatures near absolute zero. Then the ultracold atoms are loaded into a two-dimensional optical lattice, a checkerboard-like pattern of dark and bright regions of light that is produced by interfering laser beams. Ultracold atoms in such lattices offer the opportunity to realize different states of matter.

For very intense optical lattices (which means a very high contrast between dark and bright areas), a highly ordered state develops, a so-called Mott insulator (named after the British physicist Sir Neville Mott). In this state, each lattice site is occupied with exactly one single atom, which is fixed to its place. If the lattice intensity is decreased more and more, a phase transition to a superfluid takes place. In a superfluid, all atoms are part of a single field, which extends over the whole lattice and describes the collective motion of the system as one extended quantum mechanical wave. The dynamics of this quantum field follows the laws of an “effective” relativistic field theory, in which the speed of light is replaced by the speed of sound. When the system is brought out of equilibrium, collective oscillations in the form of Higgs excitations can be generated. 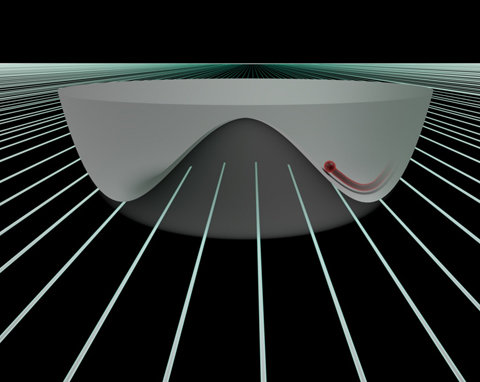 A fundamental challenge for the researchers has been to find out whether Higgs excitations can survive even in a two-dimensional system, and if so, how they can be detected. To answer these questions, the scientists set the system parameters such that the quantum gas is very close to the described transition from a superfluid to a Mott insulator. Then, for several milliseconds, the lattice intensity is gently modulated. This modulation is expected to create a few Higgs excitations, while minimally disturbing the system. “We shake the system only very gently to avoid undesired side effects. Otherwise, we could not isolate the signal of the Higgs excitations”, Manuel Endres, one of the senior researchers on the project, points out. “We are able to measure the temperature of the system with a precision of a billionth of a Kelvin using an extremely sensitive method developed in our group. With this method, we could detect small peaks in the temperature distribution at certain values of modulation frequencies.” 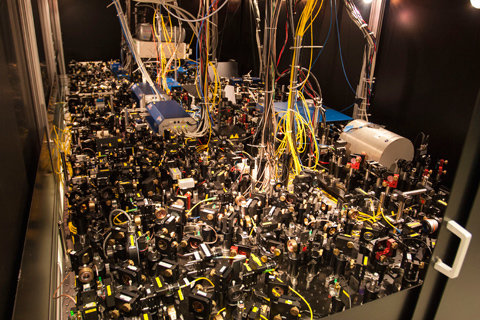 Figure 2: Part of the experimental apparatus at the MPQ. Shown is an optical table with lasers used to cool the atoms as well as various optical and electro-optical elements to control the laser beam parameters. Photo: MPQ, Quantum Many-Body Division

The researchers interpret their observations in the following way: Once the frequency of the intensity modulation matches the oscillation frequency of a Higgs excitation, the generation of Higgs excitations is resonantly enhanced. In this situation, more energy is transferred to the system which leads to a rise in its temperature. The experimental data show a clear shift to lower oscillation frequencies when the transition to a Mott insulator is approached. “We talk about a ‘softening’ of the Higgs excitation, which is characteristic of their collective behaviour in the vicinity of the quantum phase transition,” Manuel Endres points out.

It has been a subject of theoretical debate whether Higgs excitations exist at all in such a system, and if so, what their precise properties are. “We have detected a phenomenon which, at present, cannot be precisely calculated. This makes the experimental observation even more important”, Manuel Endres says. Olivia Meyer-Streng