Laser frequency combs can be used for the calibration of astronomical spectrographs.

This will help to find extra-solar planets, i.e. planets that are orbiting a star outside our solar-system. By refining this technology it might become possible to directly measure even very small changes in the expansion velocity of the universe.

Since their invention some ten years ago, laser frequency combs have proven to be a vital tool in many laser laboratories around the world. Originally developed for the investigation of the quantum world, they are now making their way into astronomy and astrophysics. A team of scientists from the Laser Spectroscopy Division of Professor Theodor W. Hänsch at the Max Planck Institute of Quantum Optics (Garching), in collaboration with the European Southern Observatory (ESO), the Instituto de Astrofísica de Canarias, and the Menlo Systems GmbH (Martinsried), has now modified the frequency comb technique in a way that it can be applied for the calibration of astronomical spectrographs (Nature, 31 May 2012, DOI:10.1038/nature11092). The new instrument has been tested successfully with the High Accuracy Radial velocity Planet Searcher (HARPS), a spectrograph at the 3.6-metre-telescope at the La Silla Observatory in Chile. A tenfold improvement of precision was obtained as compared with traditional spectral lamp calibrators. This will greatly enhance the chances to find earth-like planets outside our solar system. Ultimately, the search for extra-solar planets shall answer the question whether our solar system is the only place in the universe that provides the conditions for life as we know it.

These planets cannot be imaged directly, even with the largest telescopes. One of the most successful detection methods is the measurement of the tiny Doppler shifts in the spectrum of the parent star which is due to the recoiling motion caused by the planet. The light which reaches us from distant stars is composed of numerous spectral lines that are characteristic of the different chemical elements in the star’s gas atmosphere. When the star is moving towards the observer or away from her, these lines are shifted to slightly higher or lower frequencies. Vice versa, the measurement of the Doppler shifts gives information about the star’s movement. This provides a very promising way to find extra-solar planets which reveal their identity only indirectly: while travelling around their central star they push and pull it a little bit, causing a relatively small change of its velocity. (For comparison: While the sun orbits the galactic centre with a speed of 220 kilometres per second, the recoil on the sun caused by the Earth amounts to 9 centimetres per second.)

Hence, the amount of Doppler shift in the star’s spectrum is very small and can be detected only with the help of high precision measurement tools. “Measuring” a physical parameter is equivalent to comparing it with a calibrated standard. So far the precision in frequency measurements was limited by slow drifts like aging of the calibration source, e.g. a thorium spectral lamp. The laser-frequency combs invented in the late nineties – for which Theodor W. Hänsch and John Hall were awarded the Nobel Prize in 2005 – have greatly improved the precision of frequency measurements. In 2005 MPQ and ESO decided to cooperate on the development of frequency combs for the calibration of astronomical spectrographs. As the first test measurements carried out at the VTT in Tenerife in 2008 turned out to be very promising, the scientists began to work on a frequency comb for the HARPS-spectrograph at the La Silla Observatory. 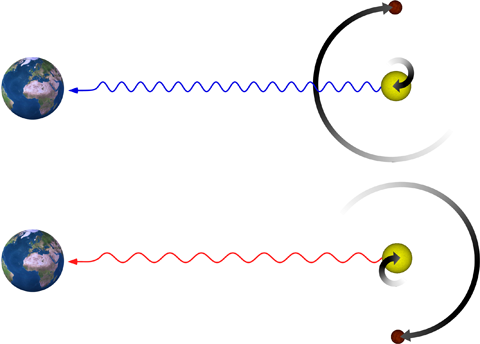 Fig. 1: Use of Doppler shift measurements in the search for extra-solar planets.

When a planet (red ball) orbits a star (yellow ball), the recoil it exerts gives rise to a periodic movement: at one time the star is moving towards the observer (above), and the light waves appear to be squeezed. This means the radiation is shifted towards higher frequencies, which is called a “blue shift”. If, on the other hand, the star is travelling away from the observer (see below), the waves seem to be stretched, resulting in a so-called “red-shift” towards lower frequencies. Graphic: Th. Udem, MPQ

A frequency comb is emitted by a laser delivering light with a spectrum composed of many lines at constant intervals. By electronic feedback circuits each line is defined in reference to an atomic clock. By comparing the spectral lines of a star with the lines of this laser ruler, which does not change over time, it is possible to observe even very small variations of the star light, caused e.g. by an orbiting planet.

The adaption of the laser-frequency comb for its application in astronomical spectroscopy posed a few major technical challenges. Even precision spectrographs like HARPS provide a limited frequency resolution, typically of 105. Hence the lines of the frequency comb to be developed have to be spaced at intervals of more than 10 GHz, otherwise the spectrograph would not be able to resolve them. Furthermore, astronomical spectrographs operate in the visible spectral region.

In order to ensure robust and stable operation fibre-laser systems were chosen as the basis of the frequency comb. Fibre-laser systems, however, emit light in the infrared region, with spectral distances of a few 100 MHz. The scientists were able to change these properties by implementing a cascade of several spectral filters and using advanced fibres (developed by Philip Russell from the Max Planck Institute for the Science of Light, Erlangen). This resulted in a frequency comb with the desired mode spacing and a broad spectrum in the visible region. The calibration of the HARPS spectrograph with this frequency comb resulted in a sensitivity for velocity changes of 2.5 cm/s. This was demonstrated in a series of measurements in November 2010 and January 2011. By observing a star with a well known planet for a couple of nights the team could prove the high stability of the system over time. 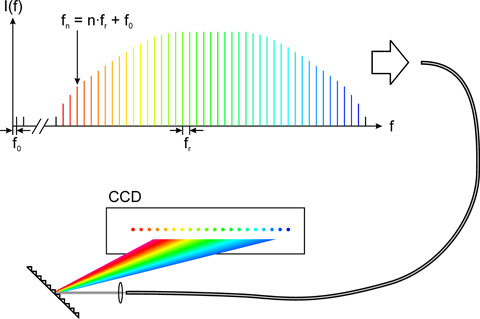 For the near future the scientists pursue a task that is even more demanding than looking for planets. Astronomical observations have clearly shown that the universe is not static but instead expanding continuously. New results on the microwave background radiation and the observation of supernovae suggest that this expansion is accelerating over time. However, the change of the velocity is expected to be very small, of the order of annually one centimetre per second. Such precision is to be delivered by the next ESO-project, the European Extremely Large Telescope (E-ELT) which is planned to be constructed in Chile in about 10 years from now. High precision frequency combs will be at the heart of its CODEX spectrograph, providing a calibration precision of one part per 300 billion – a feat equivalent to measuring the circumference of the Earth to half a millimetre. Olivia Meyer-Streng