The New World of Gamma-Ray Optics

The research group of Prof. Dietrich Habs (Ludwig Maximilians-Universität München and Max Planck Institute of Quantum Optics, Garching), in collaboration with scientists from the Laue-Langevin Institute (ILL, Grenoble, France), has opened a new chapter in the field of optics: Performing measurements with gamma-rays from the ILL high flux reactor they made the discovery that these extremely high energetic electromagnetic waves can be bent with lenses, similar to visible light, in contrast to prevailing theoretical predictions (PRL, May 3, 2012). This discovery will lead to a whole range of new applications, in particular in nuclear physics and nuclear medicine.

Optical instruments, e.g. telescopes and microscopes, are based on the refraction properties of light: when electromagnetic radiation travels through a medium like glass, its speed is lower than in air or in vacuum. That is why it is deflected, e.g. onto the focal plane of a camera. The amount of this effect is described by the index of refraction, which depends on the material of the lens and the frequency of the waves. The more it differs from 1, the stronger is the deflection of the light rays.

Up to now it was widely believed that it is impossible to create optical lenses for electromagnetic radiation with energies by far exceeding the energy of visible light. Mathematical calculation based on perturbation theory had predicted a refractive index of almost exactly 1 for all materials in this spectral region. However, it was shown in the 1990ies that even x-rays can be bent by lenses made of beryllium or carbon. “I was very impressed by the development of lenses for x-rays”, Prof. Habs remembers. “Therefore I asked myself whether it was possible to create similar tools for gamma-rays.”

In their experiments the scientists used the intense beams of the gamma-ray source provided by the research reactor of the ILL, with energies between 0.18 to 2 MeV. The gamma-rays were guided through a set-up of two silicon crystals with a silicon wedge between them. The upper half of the gamma-beam was passing through the wedge, while the lower half passed underneath through air. By comparing the different paths of the beams the physicists determined the deflection caused by the silicon wedge. It turned out to be a hundred thousand times larger than was predicted by theory. This is due to a process known as Delbrück scattering which has been underestimated so far. “The core of silicon atoms contains 14 protons”, Habs explains. “These give rise to high electric fields in which, for very short times, many electron-positron pairs form a virtual plasma from which the gamma quanta are scattered. This is a way of matter-light interaction which cannot be treated by the usual methods of perturbation theory.”

The high refractive index observed here for the first time provides new possibilities for developing gamma-ray optics which in turn will allow for new gamma-ray sources with optimized properties. These will offer a whole range of new applications: as gamma-rays penetrate the atoms and get as far as to their cores they are sensitive to the different isotopes of a chemical element. This will provide new opportunities for the detection of enriched uranium, for example. Toxic nuclear waste could be analyzed and “smashed” by gamma-rays even inside closed containers. But also medical treatments would profit from the discovery: For the detection of cancer cells usually other radioactive isotopes are required than for their treatment. New gamma-ray sources would make it possible to generate different isotopes of a particular element for different purposes.

In summer the team of Prof. Habs will continue their measurements at the European Radiation Facility (ESRF) in Grenoble – this time using lenses made of gold (see picture below). “As the nuclei of gold atoms contain 79 protons, they will deflect gamma-rays even much more strongly than silicon lenses”, Habs points out. [Ch.B./O.M.] 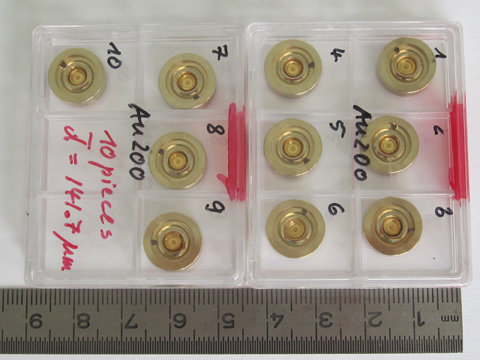 Figure caption: New lenses for gamma-ray optics: These lenses made of gold presumably have a much higher refractive index than silicon lenses at which diffraction of gamma rays was observed for the first time. The measurements are in contrast to prevailing theoretical predictions and show a perspective for a variety of applications in medicine and material science. Photo: Dietrich Habs / LMU