New light at the end of the tunnel

October 17, 2011
Who wants to decant liquids in the kitchen without spilling knows to value a funnel. Funnels are not only useful tools in the kitchen. Light can also be efficiently concentrated with funnels. In this case, the funnels have to be about 10.000-times smaller. An international team of scientists from the Korea Advanced Institute of Science and Technology (KAIST) in Daejeon (South Korea), the Max Planck Institute of Quantum Optics (MPQ) in Garching (Germany), and the Georgia State University (GSU) in Atlanta (USA) has now managed to concentrate the energy of infrared light pulses with a nano funnel and use the concentrated energy to generate extreme ultraviolet light flashes. These flashes, which repeated 75 million times per second, lasted only a few femtoseconds. The new technology can help in the future to measure the movement of electrons with the highest spatial and temporal resolution (Nature Photonics, 16.10.2011).

Light is convertible. The wavelengths composing the light can change through interactions with matter, where both the type of material and shape of the material are important for the frequency conversion. An international team of scientists from the Korea Advanced Institute of Science and Technology (KAIST), the Max Planck Institute of Quantum Optics (MPQ), and the Georgia State University (GSU) has now modified light waves with a nano funnel made out of silver. The scientists converted femtosecond laser pulses in the infrared spectral range to femtosecond light flashes in the extreme ultraviolet (EUV). Ultrashort, pulsed EUV light is used in laser physics to explore the inside of atoms and molecules. A femtosecond lasts only a millionth of a billionth of a second.

Light in the infrared (IR) can be converted to the EUV by a process known as high-harmonic generation, whereby the atoms are exposed to a strong electric field from the IR laser pulses. These fields have to be as strong as the fields holding the atom together. With these fields electrons can be extracted from the atoms and accelerated with full force back onto the atoms. Upon impact highly energetic radiation in the EUV is generated.

To reach the necessary strong electric fields for the production of EUV light, the team of scientists has now combined this scheme with a nano funnel in order to concentrate the electric field of the light. With their new technology, they were able to create a powerful EUV light source with wavelengths down to 20 nanometers. The light source exhibits a so far unreached high repetition rate: the few femtoseconds lasting EUV light flashes are repeated 75 million times per second.

The core of the experiment was a small, only a few micrometers long, slightly elliptical funnel made out of silver and filled with xenon gas (see Fig. 1). The tip of the funnel was only ca. 100 nanometers wide. The infrared light pulses were sent into the funnel entrance where they travel through towards the small exit. The electromagnetic forces of the light result in density fluctuations of the electrons on the inside of the funnel. Here, a small patch of the metal surface was positively charged, the next one negative and so on, resulting in new electromagnetic fields on the inside of the funnel, which are called surface plasmon polaritons. The surface plasmon polaritons travel towards the tip of the funnel, where the conical shape of the funnel results in a concentration of their fields. “The field on the inside of the funnel can become a few hundred times stronger than the field of the incident infrared light. This enhanced field results in the generation of EUV light in the Xe gas.”, explains Prof. Mark Stockman from GSU. 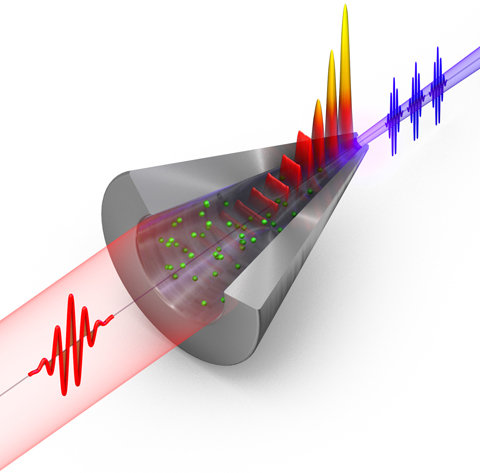 Figure caption: Scheme of the generation of EUV light by the 3D nano funnel. The infrared light (shown in red) is incident at the entrance of the Xe (green depicted particles) filled nano funnel (shown as a half-cut). The surface plasmon polariton fields (wave pattern) concentrate near the tip of the structure. Extreme ultraviolet light (shown in purple) is generated in the enhanced fields in Xe and exits the funnel through the small opening, while the infrared light cannot penetrate the small opening and is back-reflected. (Picture: Christian Hackenberger)

The nano funnel has yet another function. Its small opening at the exit acts as “doorman” for light wavelengths. Not every opening is passable for light. If the opening is smaller than half of a wavelength, the other side remains dark. The 100 nanometer large opening of the funnel did not allow the infrared light at 800 nm to pass. The generated EUV pulses with wavelengths down to 20 nanometers passed, however, without problems. “The funnel acts as an efficient wavelength filter: at the small opening only EUV light comes out.”, explains Prof. Seung-Woo Kim from KAIST, where the experiments were conducted.

“Due to their short wavelength and potentially short pulse duration reaching into the attosecond domain, extreme ultraviolet light pulses are an important tool for the exploration of electron dynamics in atoms, molecules and solids”, explains Seung-Woo Kim. Electrons are extremely fast, moving on attosecond timescales (an attosecond is a billionth of a billionth of a second). In order to capture a moving electron, light flashes are needed, which are shorter than the timescale of the motion. Attosecond light flashes have become a familiar tool in the exploration of electron motion. With the conventional techniques, they can only be repeated a few thousand times per second. This can change with the nano funnel. “We assume that the few femtosecond light flashes consist of trains of attosecond pulses”, argues Matthias Kling, group leader at MPQ. “With such pulse trains, we should be able to conduct experiments with attosecond time resolution at very high repetition rate.”

The repetition rate is important for e.g. the application of EUV pulses in electron spectroscopy on surfaces. Electrons repel each other by Coulomb forces. Therefore, it may be necessary to restrict the experimental conditions such that only a single electron is generated per laser shot. With low repetition rates, long data acquisition times would be required in order to achieve sufficient experimental resolution. “In order to conduct experiments with high spatial and temporal resolution within a sufficiently short time, a high repetition rate EUV source is needed”, explains Kling. The novel combination of laser technology and nanotechnology can help in the future to record movies of ultrafast electron motion on surfaces with so far unreached temporal and spatial resolution in the attosecond-nanometer domain. Thorsten Naeser