Physicists of the MPQ have generated for the first time “white” light pulses and they are able to control their field on a time scale shorter than an optical oscillation.

These new tools hold promise for unprecedented control of the motion of electrons in the microcosm.

An expedition through the fast-paced microscopic world of atoms reveals electrons that spin around at an enormous speed and that gigantic forces are acting on them. Monitoring the ultrafast motion of these electrons requires ultrashort flashes of light. However, in order to control them, the structure of these light flashes, or light pulses, needs to be tamed as well. This type of control over light pulses has now, for the first time, been achieved by a team of physicists lead by Dr. Eleftherios Goulielmakis and Prof. Ferenc Krausz of the Laboratory of Attosecond Physics at the Max Planck Institute of Quantum Optics (MPQ) and the Ludwig-Maximilians-University (LMU Munich), along with collaborators from the Center of Free-Electron Laser Science (DESY Hamburg) and the King Saud University (Saudi Arabia). Taking advantage of the fact that light possesses both particle-like and wave-like properties, they have sculpted fine features into the waveform of these pulses of white light. Additionally, the researchers were able to make their pulses shorter than a complete light oscillation, thereby creating for the first time isolated sub-optical-cycle flashes of light. Not only will these novel tools allow for the precise control of electron motion in the fundamental building blocks of matter, they will also enhance the tracing of atomic processes and will permit a more precise timing of electronic processes in molecules and atoms. The results of the research are published in the scientific magazine SCIENCE (SCIENCE Express 8.9.2011).

That is the reason why light is a promising tool for controlling electron dynamics in the microcosm. Yet, before this can become reality, the light’s field oscillations have to be tamed, i.e. its field has to be precisely and completely controllable on a time scale which is shorter than one full oscillation cycle. In order to achieve this lofty goal, one first has to learn how to develop and perfect these extraordinary tweezers.

The international team at MPQ around Dr. Eleftherios Goulielmakis and Prof. Ferenc Krausz has now mastered a big step towards this ambitious aim, managing to sculpt wave forms of laser pulses with a sub-cycle precision.

In order to control light pulses on a sub-cycle time scale, it is necessary to use white laser light, as it contains wavelengths (light colors) ranging from the near-ultraviolet, over the visible, all the way to the near infrared region of the electromagnetic spectrum. The physicists have created these light pulses and sent them into a newly developed “light field synthesizer”. The light field synthesizer is analogous to a sound synthesizer, as used by electronic musicians. Just as the sound synthesizer, which superimposes sound waves of different frequencies to create different sounds and beats, the light field synthesizer superimposes optical waves of different colors and phases to create various field shapes. The apparatus first splits the incident white laser light into red, yellow and blue color channels. After manipulating the properties of the individual colors, they are recombined to form the synthesized wave form. Several components of this novel device, e.g. its mirrors and its elaborate beam splitters, were developed in the service center of the Munich Centre for Advanced Photonics (MAP) located at the LMU.

Utilizing this technology, the scientists achieved the generation of completely new isolated waveforms. Furthermore, in doing so they managed to compose the shortest pulses ever measured in the visible spectral range, lasting only 2.1 femtoseconds. These pulses are more intense than the ones commonly afforded by current femtosecond light sources because all the energy of the electromagnetic field is confined into a tiny temporal window.

It is precisely these powerful and specially tailored electromagnetic forces which are necessary to control electrons in atoms and molecules, as they are similar in strength to the forces occurring in such microscopic systems. However, to steer electron motion on a microscopic scale, strength is not the only prerequisite because precision is also needed. This level of desired precision is provided by the well-controlled wave forms of the synthesized light pulses.

Thanks to these latest results, the scientists have accomplished a major step towards the control of the microcosm. “These newly developed tools allow us to initiate, control and therefore further understand inner-atomic processes. With these devices, we can master the fine structuring of ultrashort light fields and reliably measure the newly formed light”, explains Dr. Adrian Wirth, Postdoctoral Fellow in the research team of Dr. Eleftherios Goulielmakis, leader of the ERC-research group “Attoelectronics”. 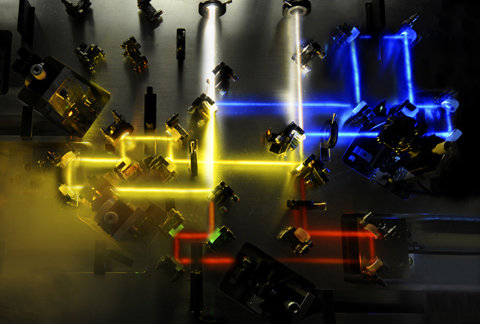 As a matter of fact, the physicists have already applied this novel technique in an experiment. By shining the newly designed light pulses onto krypton atoms, the outermost electron was ripped away within less than 700 attoseconds, marking the fastest electronic process which has been initiated by optically visible light. Similar processes can certainly be achieved in more complex systems such as molecules, solids and nanoparticles.

This new technology may very well lead the way towards light-based electronics in the future. Light fields are expected to drive electrons not only in isolated systems such as atoms or molecules, but even on microscopic circuits so as to perform logic operations at unprecedented speeds” said Dr. Goulielmakis, whose group is exploring the principles of electronics on these extreme time scales. “We are progressively increasing our understanding of the principles in the microcosm and learning how to control it”, adds Ferenc Krausz. Thorsten Naeser

Additional material is available at:
http://www.attoworld.de/Home/newsAndPress/Gallery/index.html