Scientists at MPQ develop octave-spanning frequency comb with a microresonator

August 05, 2011
More than a decade ago, the frequency comb technique was developed at the Max Planck In-stitute of Quantum Optics by Professor Theodor W. Hänsch. The new tool has stimulated fun-damental research as well as laser development and its applications because it gave rise to a major increase in the accuracy of measuring optical frequencies. Already a couple of years ago, a team of scientists around Dr. Tobias Kippenberg, formerly Leader of the Max Planck Research Group “Laboratory of Photonics and Quantum Measurements” at MPQ, who has since then become Associate Professor at the Ecole Polytechnique Fédérale de Lausanne (EPFL), succeeded for the first time in generating optical frequency combs using chip-based quartz glass toroids with diameters on the micrometer scale. Now the scientists made a big step further: their new microresonators produce light over a range of more than an octave and are at the same time precisely tunable (PRL 107, 063901, 1 August 2011). This achievement brings a variety of applications into reach, such as optical telecommunications or the precise calibration of spectrographs in astrophysics.

A frequency comb is a light source containing – similar to a rainbow – a large spectrum of colours. However, the frequencies are not continuously distributed. Instead, up to a million spectral lines are spaced in exactly the same distance. The superposition of this “comb” with another laser beam results in a pattern from which the unknown laser frequency can be determined with very high accuracy. The frequency comb developed by Prof. Hänsch is based on a mode-locking process in short-pulse lasers. This set-up consists of many optical components, even though it is made today relatively compact and commercially available. Indeed, Menlo Systems Ltd., a spin-off company established by MPQ is meanwhile marketing the frequency comb technology worldwide.

A couple of years ago, the group “Laboratory of Photonics and Quantum Measurements”, which was associated with the Laser Spectroscopy Division of Professor Hänsch, has succeeded in generating a frequency comb by means of a tiny microstructure, a toroidal glass resonator with a diameter of less than 100 micrometres. This was done in cooperation with Dr. Ronald Holzwarth from Menlo Systems Ltd. and promises to radically reduce the size of frequency comb generators.

Using a “nanowire” made of glass the scientists couple light from a diode laser into this monolithic structure, where it is stored for a rather long time. This leads to extremely high light intensities inside the resonator, i.e. photon densities, which again produce nonlinear effects such as ‘four-wave mixing’ induced by the Kerr effect: two light quanta of equal energy are converted to two photons of which one light quantum has a higher energy, the other a lower energy than the original ones. The newly produced light fields can in turn interact with the original light fields, thereby producing new frequencies. From this cascade emerges a broad, discrete spectrum of frequencies. By optimizing the geometry of the toroid microresonator, Dr. Pascal Del’Haye (MPQ) and Tobias Herr (EPFL), doctoral students at the referred experiment, have managed to compensate the effects of dispersion, such that the photon round-trip time inside the resonator remains the same for all light frequencies. Now the microresonators produce light over the range of more than an octave, from von 900 bis 2170 nm (near IR), for the first time. (As on the keyboard of a piano, the range of an octave corresponds to a doubling of the frequency.)

By raising the intensity of the light coupled into the resonator the frequencies of the comb can be shifted simultaneously. The higher intensities increase the temperature of the glass structure by up to 800 degree Celsius whereby the resonator is expanding and changing its index of refraction. Both effects lead to a shift of the comb lines towards lower frequencies, i.e. longer wavelengths. The broad range of frequencies as well as the tunability is an important pre-condition for self-referencing, where the lower range of the spectrum is doubled and compared to the upper part. Self-referencing is an important precondition for the use of frequency combs in metrology.

Also optical telecommunications will profit from the new tool. Whereas in the conventional frequency comb the lines are extremely close and of very low intensity, the spectral lines of the monolithic frequency comb have a separation of about 850 gigahertz and powers of the order of one milliwatt. This spacing and power level corresponds to the typical requirements for the “carriers” of the data channels in fibre-based optical communications. Tunability and broad range make the device also suitable for very precise calibration of spectrographs for astrophysics. Due to the large variety of possible applications many groups worldwide show interest in using the resonators for the miniaturization of photonic devices. A number of other geometries and materials are investigated, e.g. polished crystals, highly reflective fiber cavities and silicon structures based on computer-chip technology. Olivia Meyer-Streng 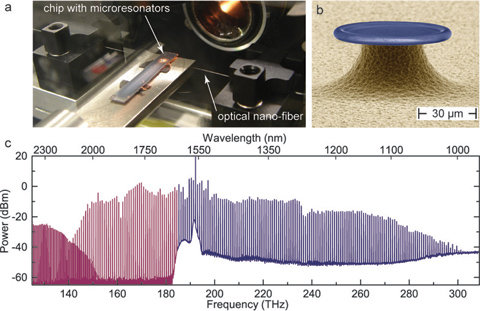