International collaboration including MPQ scientists sets a new value for the antiproton mass relative to the electron with unprecedented precision.

July 28, 2011
According to modern cosmology, matter and antimatter were created in equal amounts in the Big Bang at the beginning of the universe. Physicists are developing concepts to explain why the visible universe now seems to be made entirely out of matter. On the other hand, experimental groups are producing antimatter atoms artificially to explore the fundamental symmetries between matter and antimatter, which according to the present theories of particle physics should have exactly the same properties, except for the opposite electrical charge). Now the independent research group “Antimatter Spectroscopy” of Dr. Masaki Hori, which is associated with the Laser Spectroscopy Division of Prof. Theodor W. Hänsch at the Max Planck Institute of Quantum Optics, has measured the mass of the antiproton relative to the electron with a precision of 1.3 parts per billion (Nature, 28 July 2011). For this they used a new method of laser spectroscopy on a half-antimatter, half-matter atom called antiprotonic helium. The result agreed with the proton mass measured to a similar level of precision, confirming the symmetry between matter and antimatter. The experiment was carried out at the European Laboratory for Particle Physics (CERN) in Geneva (Switzerland) in a project led by scientists from the Max Planck Institute of Quantum Optics and Tokyo University (Japan), and including the University of Brescia (Italy), the Stefan Meyer Institute (Vienna, Austria), and the KFKI Research Institute (Budapest, Hungary).

Physicists believe that the laws of nature obey a fundamental symmetry called “CPT” (this stands for charge conjugation, parity, and time reversal), which postulates that if all the matter in the universe were replaced with antimatter, left and right inverted as if looking into a mirror, and the flow of time reversed, this “anti-world” would be indistinguishable from our real matter world. Antimatter atoms should weigh exactly the same as their matter counterparts. If scientists were to experimentally detect any deviation, however small, it would indicate that this fundamental symmetry is broken. “Small” is the keyword here – it is essential to use the most precise methods and instruments available to make this comparison with the highest possible precision.

Antimatter is extraordinarily difficult to handle in the laboratory, because upon coming into contact with ordinary matter (even the air molecules in a room), it immediately annihilates, converting into energy and new particles. In 1997, researchers from the Max Planck Institute of Quantum Optics in cooperation with other European, Japanese, and American groups began construction of a facility called the Antiproton Decelerator (AD) at CERN. Here antiprotons produced in high-energy collisions are collected and stored in a vacuum pipe arranged in a 190-m-long racetrack shape. The antiprotons are gradually slowed down, before being transported to several experiments. The so-called ASACUSA1 (Atomic Spectroscopy and Collisions using Slow Antiprotons, named after a district in Tokyo) collaboration, of which Dr. Hori is one of the project leaders, sends the antiprotons into a helium target to create and study antiprotonic helium atoms.

Normal helium atoms consist of a nucleus with two electrons orbiting around it. In antiprotonic helium, one of these electrons is replaced by an antiproton, which finds itself in an excited orbit some 100 picometres (10-10 m) from the nucleus. Scientists fire a laser beam onto the atom, and carefully tune its frequency until the antiproton makes a quantum jump from one orbit to another. By comparing this frequency with theoretical calculations, the mass of the antiproton can be determined relative to the electron.

An important source of imprecision arises because the antiprotonic atoms jiggle around randomly according to their thermal energy, so that atoms moving towards the laser beam experience a different frequency compared to those moving away. This is similar to the effect that causes the siren of an approaching ambulance to change pitch as it passes you by. In their previous experiments of 2006, the MPQ / ASACUSA scientists used one laser beam, and this effect limited the precision of their measurement.

This time to go beyond this limit, a technique called “two-photon laser spectroscopy” was used. The atoms were struck by two laser beams travelling in opposite directions, with the result that the effect was partially cancelled, leading to a four to six times higher precision. The first laser caused the antiproton to make a quantum jump to a virtual energy level normally not allowed by quantum mechanics, so that the second laser could actually bring the antiproton up to the closest allowed state. Such a two-photon jump is normally difficult to achieve because the antiproton is heavy, but MPQ scientists accomplished it by building two ultra-sharp lasers and carefully choosing a special combination of laser frequencies. To do this, an optical frequency comb – a special device invented 10 years ago by the group of Prof. Theodor W. Hänsch to measure the frequency of light – was used. 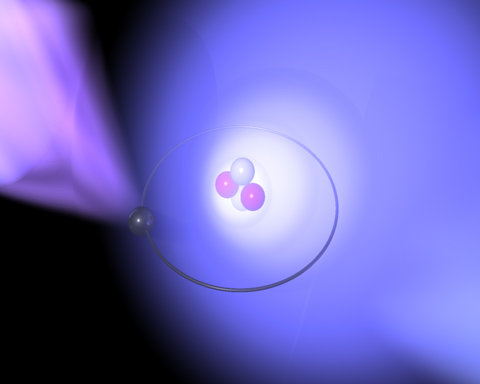 Figure: An antiproton (black sphere) trapped inside a helium atom is probed by two laser beams.

The new measurements showed that the antiproton is 1836.1526736(23) times heavier than the electron, the parenthesis showing the 1-standard deviation imprecision. “We have measured the mass of the antiproton relative to the electron with a precision of 10 digits, and have found it exactly the same as the proton value known with a similar precision”, Masaki Hori explains. “This can be regarded as a confirmation of the CPT theorem. Furthermore, we learned that antiprotons obey the same laws of nonlinear quantum optics like normal particles, and we can use lasers to manipulate them. The two-photon technique would allow much higher precisions to be achieved in the future, so that ultimately the antiproton mass may be better known than the proton one.”

The Committee on Data for Science and Technology (CODATA) uses the results of this experiment as one of several input data to determine the proton-to-electron mass ratio, which in turn influences the values of many other fundamental constants. Olivia Meyer-Streng

1ASACUSA is one of several experiments studying antimatter at CERN. ATRAP and ALPHA investigate antihydrogen atoms, AeGIS studies how antihydrogen falls under gravity, and ACE studies the possible use of antiprotons for cancer therapy.