Information sharing at the quantum limit

A photon transfers its secrets onto a single atom.

Scientists in the group of Professor Gerhard Rempe, Director at the Max-Planck-Institute of Quantum Optics and head of the Quantum Dynamics Division, have now succeeded for the first time in transferring quantum information encoded in a single photon onto a single atom. There the information is stored for some time and retrieved later on (Nature, Advance Online Publication, DOI: 10.1038/nature09997, May 2011). “This provides us with a universal node for a quantum network”, Gerhard Rempe points out enthusiastically. The experiment opens up new perspectives for the development of scalable quantum networks in which photons communicate quantum information between several nodes over long distances.

The ongoing miniaturisation of chip structures used for information storage has reached the limits where the laws of classical physics can no longer be applied. Instead, the systems are ruled by the laws of quantum mechanics. In this physical limit, the smallest storage device consists of a single atom, while the smallest possible unit for optical data transfer is a single photon. The special properties of these quantum particles can thus be used to engineer novel applications, e.g. quantum cryptography devices or gates to process quantum information. Implementing such new technologies requires new concepts for transferring and storing information.

Along these lines, the most promising candidate is the implementation of a network of distributed quantum memories communicating with each other via exchange of photons. Such development requires two main realizations. The first, the transfer of the quantum information stored from a memory node onto a single photon, has already been demonstrated a couple of years ago in the Quantum Dynamics Division with the implementation of a single-photon-emitter based on a single atom. The second, the writing of a photonic qubit into another stationary quantum memory and its retrieval without significant distortion, has so far been only fulfilled by experiments using ensembles comprising thousands of particles, with the information being mapped onto a shared atomic excitation. In order to take full advantage of the opportunities provided by quantum mechanics in practical implementations, e.g. in quantum computers, it would be best to exchange information between single particles of both light and matter, that can directly be addressed and manipulated.

In the experiment described here, a single rubidium atom is employed as a quantum memory for the first time. In order to increase its weak coupling to a single photon, the atom is trapped inside an optical resonator consisting of two highly reflecting mirrors. There it is kept in place with laser light, while the incoming photon is reflected back and forth between the two mirrors around 20 000 times. Now the quantum information stored in the photon has to be written onto the atom. “While a classical bit always represents unambiguously one of two possible values – for example 0 or 1 –, a quantum bit is a coherent superposition of two quantum states”, Dr. Holger Specht, scientist in the Quantum Dynamics Division, explains. “We therefore encode the information using a coherent superposition of two polarisation states of the photon, e.g. right- and left-handed polarisation.”

The transfer of the optical quantum information is enabled by a so-called control laser: when both the photonic qubit and control laser are present, the atom makes a transition into a state which is – and this is the trick – a coherent superposition of two sub-states. The relative amounts of the two sub-states correspond to the respective amounts of the two polarization states of the input-photon. After a variable storage time, the read-out of the quantum information is initiated by the control laser as well. Now the whole process is reversed and the photonic qubit is released, with an average efficiency of about 10 percent.

In a series of measurements using different input polarisation states, the fidelity between the original and read out photons turned out to be higher than 90 percent in all cases. “The fidelity with the input photon that we achieve with our new method is much better than what would be possible with any kind of classical measurement device”, says Christian Nölleke, doctoral student at the experiment.

Considering the achieved storage efficiency and fidelity, the system is comparable to the best quantum memories available worldwide, with the difference that its “hardware” consists of only a single atom. At the same time it provides storage times of about 200 microseconds which exceeds all values achieved with optical memories so far. “There is still room for improving fidelity and storage times by optimizing the experimental conditions”, Dr. Stephan Ritter, scientist in the Quantum Dynamics Division, points out.

In the near future the scientists plan to use the system to demonstrate a basic quantum network made of two communicating nodes. Because of its universal properties, the quantum memory demonstrated here is a cornerstone for the development of optical quantum gates and quantum repeaters. These devices are fundamental requirements for the processing of quantum information in a quantum computer and the implementation of long distance quantum communication. Olivia Meyer-Streng 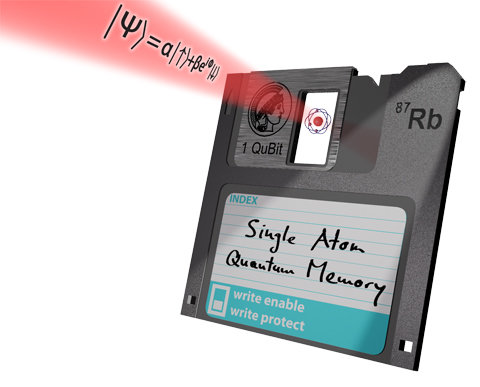 Figure: Quantum information encoded in weak light pulses consisting of single photons is transferred onto a single rubidium atom. There, the information is stored for some time and retrieved later on by producing a single photon. Image courtesy of Andreas Neuzner, MPQ.

Link to the original publication