Electron Ping Pong in the Nano-world

An international team of researchers succeeded at the Max Planck Institute of Quantum Optics to control and monitor strongly accelerated electrons from nano-spheres with extremely short and intense laser pulses.

When intense laser light interacts with electrons in nanoparticles that consist of many million individual atoms, these electrons can be released and strongly accelerated. Such an effect in nano-spheres of silica was recently observed by an international team of researchers in the Laboratory for Attosecond Physics (LAP) at the Max Planck Institute of Quantum Optics (Nature Physics, 24. April 2011). The researchers report how strong electrical fields (near-fields) build up in the vicinity of the nanoparticles and release electrons. Driven by the near-fields and collective interactions of the charges resulting from ionization by the laser light, the released electrons are accelerated, such that they can by far exceed the limits in acceleration that were observed so far for single atoms. The exact movement of the electrons can be precisely controlled via the electric field of the laser light. The new insights into this light-controlled process can help to generate energetic extreme ultraviolet (XUV) radiation. The experiments and their theoretical modeling, which are described by the scientists in the journal “Nature Physics,” open up new perspectives for the development of ultrafast, light-controlled nano-electronics, which could potentially operate up to one million times faster than current electronics.

Electron acceleration in a laser field is similar to a short rally in a ping pongmatch: a serve, a return and a smash securing the point. A similar scenario occurs when electrons in nanoparticles are hit by light pulses. An international team, led by three German groups including Prof. Matthias Kling from the Laboratory for Attosecond Physics (LAP) at the Max Planck Institute of Quantum Optics in Garching and the Ludwig-Maximilian University Munich, Prof. Eckart Rühl from the Free University of Berlin and Prof. Thomas Fennel from the University of Rostock, was now successful in observing the mechanisms and aftermath of such a ping pong play of electrons in nanoparticles interacting with strong laser light-fields.

The researchers illuminated silica nanoparticles with a size of around 100 nm with very intense light pulses, lasting around five femtoseconds (one femtosecond is a millionth of a billionth of a second). Such short laser pulses consist of only a few wave cycles. The nanoparticles contained around 50 million atoms each. The electrons are ionized within a fraction of a femtosecond and accelerated by the electric field of the remaining laser pulse. After travelling less than one nanometer away from the surface of the nano-spheres, some of the electrons can be returned to the surface by the laser field to the surface, where they were smashed right back (such as the ping pong ball being hit by the paddle). The resulting energy gain of the electrons can reach very high values. In the experiment electron energies of ca. 60 times the energy of a 700 nm wavelength laser photon (in the red spectral region of light) have been found.

For the first time, the researchers could observe and record the direct elastic recollision phenomenon from a nanosystem in detail. The scientists used polarized light for their experiments. With polarized light, the light waves are oscillating only along one axis and not, as with normal light, in all directions. “Intense radiation pulses can deform or destroy nanoparticles. We have thus prepared the nanoparticles in a beam, such that fresh nanoparticles were used for every laser pulse. This was of paramount importance for the observation of the highly energetic electrons.”, explains Eckart Rühl.

The accelerated electrons left the atoms with different directions and different energies. The flight trajectories were recorded by the scientists in a three-dimensional picture, which they used to determine the energies and emission directions of the electrons. “The electrons were not only accelerated by the laser-induced near-field, which by itself was already stronger than the laser field, but also by the interactions with other electrons, which were released from the nanoparticles,” describes Matthias Kling about the experiment. Finally, the positive charging of the nanoparticle-surface also plays a role. Since all contributions add up, the energy of the electrons can be very high. “The process is complex, but shows that there is much to explore in the interaction of nanoparticles with strong laser fields,” adds Kling.

The electron movements can also produce pulses of extreme ultraviolet light when electrons that hit the surface do not bounce back, but are absorbed releasing photons with wavelengths in the XUV. XUV light is of particular interest for biological and medical research. “According to our findings, the recombination of electrons on the nanoparticles can lead to energies of the generated photons, which are up to seven-times higher than the limit that was so far observed for single atoms,” explains Thomas Fennel. The evidence of collective acceleration of electrons with nanoparticles offers great potential. Matthias Kling believes that “From this may arise new, promising applications in future, light-controlled ultrafast electronics, which may work up to one million times faster than conventional electronics.” Thorsten Naeser 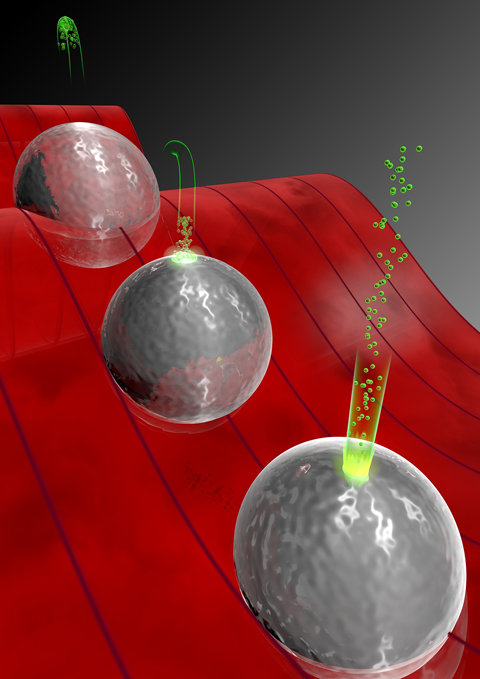 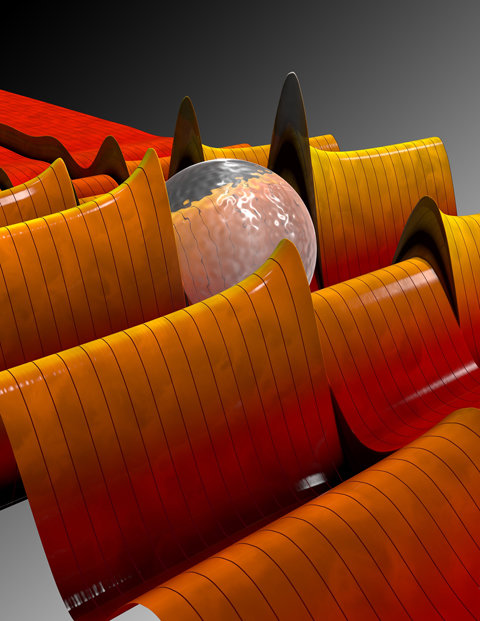 Figure 2: Amplified near-fields at the poles of a silica nanosphere. The local field on the polar axis is plotted as function of time, where time within the few-cycle wave runs from the lower right to the upper left. The fields show a pronounced asymmetry along the polarization axis of the laser (i.e. along the rims and valleys of the wave). This asymmetry leads to higher energies gained by electrons on one side of the nanoparticle as compared to the other side. For the given example the most energetic electrons are emitted from the backside, where the highest peak field is reached. The energies of the electrons and their emission directions are determined from the experiment. Courtesy of Christian Hackenberger/LMU