A Quantum Pen for Single Atoms

Physicists at the Max Planck Institute of Quantum Optics succeeded in manipulating atoms individually in a lattice of light and in arranging them in arbitrary patterns.

These results are an important step towards large scale quantum computing and for the simulation of condensed matter systems.

Physicists around the world are searching for the best way to realize a quantum computer. Now scientists of the team around Stefan Kuhr and Immanuel Bloch at the Max Planck Institute of Quantum Optics (Garching/Munich) took a decisive step in this direction. They could address and change the spin of single atoms with laser light and arrange them in arbitrary patterns (Nature 471, p. 319 (2011), DOI: 10.1038/nature09827). In this way, the physicists strung the atoms along a line and could directly observe their tunnelling dynamics in a “racing duel” of the atoms. A register of hundreds of addressable quantum particles could serve for storing and processing of quantum information in a quantum computer.

In the present experiment, the scientists load laser-cooled rubidium atoms into an artificial crystal of light. These so-called optical lattices are generated by superimposing several laser beams. The atoms are kept in the lattice of light similar to marbles in the hollows of an egg carton.

Already a few months ago, the team of Stefan Kuhr and Immanuel Bloch showed that each site of the optical lattice can be filled with exactly one atom. With the help of a microscope, the scientists visualized atom by atom and thereby verified the shell-like structure of this “Mott insulator”. Now the scientists succeeded in individually addressing the atoms in the lattice and in changing their respective energy state. Using the microscope, they focused a laser beam down to a diameter of about 600 nanometers, which is just above the lattice spacing, and directed it at individual atoms with high precision.

The laser beam slightly deforms the electron shell of the addressed atom and thereby changes the energy difference between its two spin states. Atoms with a spin – i.e. an intrinsic angular momentum – behave like little magnetic needles that can align in two opposite directions. If the atoms are irradiated with microwaves that are in resonance with the modified spin transition, only the addressed atoms absorb a microwave photon, which causes their spin to flip. All other atoms in the lattice remain unaffected by the microwave field.

The scientists demonstrated the high fidelity of this addressing scheme in a series of experiments. For this purpose, the spins of all atoms along a line were flipped one after the other, by moving the addressing laser from lattice site to lattice site. After removing all atoms with a flipped spin from the trap, the addressed atoms are visible as holes, which can easily be counted. In this way, the physicists deduced that the addressing worked in 95% of the cases. Atoms at the neighbouring sites are not influenced by the addressing laser. The method provides the possibility to generate arbitrary distributions of atoms in the lattice (see figures).

Starting from an arrangement of 16 atoms that were strung together on neighbouring lattice sites like a necklace of beads, the scientists studied what happens when the height of the lattice is ramped down so far that the particles are allowed to “tunnel” according to the rules of quantum mechanics. They move from one lattice site to the other, even if their energy is not sufficient to cross the barrier between the lattice wells. “As soon as the height of the lattice has reached the point where tunnelling is possible, the particles start running as if they took part in a horse-race”, doctoral candidate Christof Weitenberg describes. “By taking snapshots of the atoms in the lattice at different times after the "starting signal", we could directly observe the quantum mechanical tunnelling-effect of single massive particles in an optical lattice for the first time”.

The new addressing technique allows many interesting studies of the dynamics of collective quantum states, as they appear in solid state systems. It also opens new perspectives in quantum information processing. “A Mott isolator with exactly one atom per lattice site acts as a natural quantum register with a few hundred quantum bits, the ideal starting point for scalable quantum information processing” as Stefan Kuhr explains. “We have shown that we can individually address single atoms. In order for the atom to suit as a quantum bit, we need to generate coherent superpositions of its two spin states. A further step is to realize elementary logical operations between two selected atoms in the lattice, so-called quantum gates.” [OM/SK] 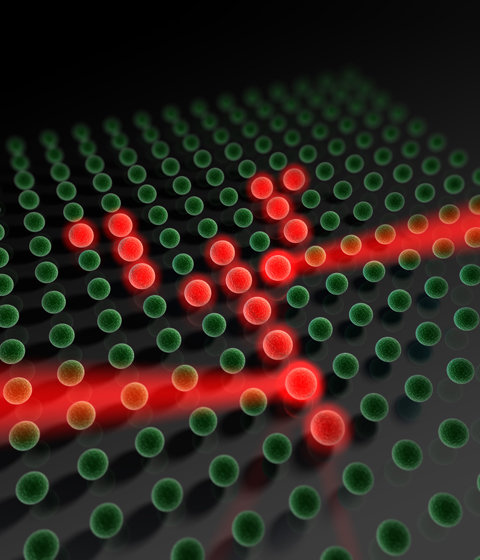 Figure 1: With the help of a laser beam, the scientists could address single atoms in the lattice of light and change their spin state. In this way they succeeded in having total control over the single atoms and in "writing" arbitrary two-dimensional patterns.

Figure 2: With the addressing scheme arbitrary patterns of atoms in the lattice can be prepared. The atomic patterns each consist of 10 - 30 single atoms that are kept in an artificial crystal of light. (High resolution images available online at www.quantum-munich.de/media)