In order to understand the behavior of atoms and molecules, it does not suffice to know their structure, but physicists furthermore want to observe their motions, and the motions of the electrons that are contained in them.

Because electrons move so rapidly, this was not possible until now. However, a European team of researchers has now developed a method that allows to observe the motions of electrons. Their report was recently published in Physical Review Letters, 30 July 2010.

The world of atoms and molecules is very different from our everyday experience. We like to think of electrons as little particles. “And that is to some extent a valid picture” explains Marc Vrakking, director at the Max Born Institute in Berlin, “but quantum mechanics also forces us sometimes to consider the wave-nature of electrons”. Using this abstract representation of an electron, physicists can explain intriguing phenomena that in the end connect to our simple picture of the electron as a particle.

In the experiment, the researchers have exploited the fact that waves can be made to interfere. In many respects their experiment resembled the famous double-slit experiment that Thomas Young performed at the start of the 19th century, where light fell onto a pair of slits and an interference pattern was observed on a screen placed downstream. The way to understand this observation is to view the incident light as a wave, and to view the interference pattern as a consequence of the fact that light passing through one slit may be in- or out-of-phase with light passing through the other. This observation cannot be explained when viewing the incident light as a collection of particles (“photons”). 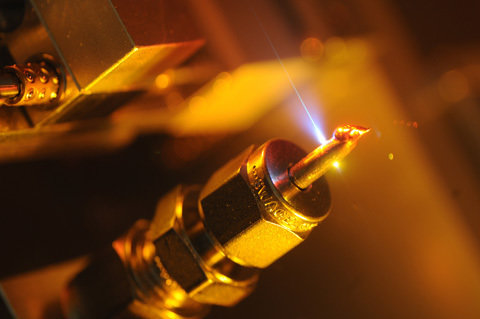