Trace gas spectroscopic detection has drawn much interest in recent years, as it both allows a better understanding of the molecular spectra of weak overtone transitions and in situ non-intrusive sensing of compounds at low concentration. However, recording a broadband spectrum within a very short measurement time and with high sensitivity remains a challenge. At the Max Planck Institute of Quantum Optics, a team of scientists around Professor Theodor W. Hänsch and Doctor Nathalie Picqué in a cooperation1 involving the Laboratoire de Photophysique Moléculaire du Centre National de la Recherche Scientifique (Orsay, France), the University of Tokyo (Chiba, Japan) and the Ludwig Maximilian’s University (Munich, Germany) have implemented a new instrument, based on laser frequency combs, which holds much promise for such a breakthrough. (Nature Photonics, AOP, January 2010 DOI:10.1038/nphoton.2009.217) The remarkable convergence between two separate fields, ultrafast optics and frequency metrology, has led to the precise control of the frequency spectrum produced by mode-locked lasers, which consists of a regular comb of sharp lines. The resulting optical frequency combs, pioneered by 2005 Nobel Prize laureate Professor Theodor W. Hänsch, have had tremendous impact on the various areas of precision measurement and extreme nonlinear optics. A growing list of applications includes molecular spectroscopy.

Here, the new instrument comes into play. All the equidistant modes of a first laser frequency comb are injected into a resonant passive high finesse cavity, which contains a gas sample. Inside the cavity the interaction length between the light and the sample is dramatically enlarged due to multiple reflections. This enhances the molecular absorption signal by several orders of magnitude. The light transmitted by the cavity exhibits a broad band spectrum of absorption lines, which needs to be analysed by a spectrometer: a second frequency comb, with a slightly detuned repetition frequency. The beat notes between pairs of lines from the two combs reveal the optical spectrum. This Fourier transform spectrometer without moving parts is one-million times faster than the scanning Michelson-based Fourier transform interferometer, which has been the dominating instrument in analytical sciences for decades. The cavity-enhanced dual-comb spectrometer described here has the potential to become a powerful tool for ultrasensitive spectroscopy without sacrificing high-resolution, spectral bandwidth, and high-speed.

A proof-of-principle experiment has been undertaken by Birgitta Bernhardt, with the help of Akira Ozawa and Patrick Jacquet, all graduate students. With Ytterbium-based fiber frequency combs emitting around 1040 nm, they succeeded for the first time in resolving the crowded weak overtone spectrum of ammonia, a molecule of planetological and environmental interests. Moreover the spectrum was recorded within only 18 microseconds and the achieved sensitivity is already 20-fold better, with a 100-fold shorter measurement time, than present state-of-the-art experiments. “As we are able to record such sensitive spectra every 20 microseconds, our technique exhibits an intriguing potential for the monitoring of chemical reactions or the spectroscopic sensing of dynamic single-events. Furthermore, we could extend our experimental concept to any region of the electromagnetic spectrum, in particular to the mid-infrared ‘molecular fingerprint’ region where no powerful real-time techniques are available at present. Here the implementation of the cavity-enhanced-dual-comb method would for instance allow sub-ppb minimum detectable concentrations for a variety of molecules of atmospheric relevance. This exhilarating perspective however still presents challenging issues”, states Birgitta Bernhardt.

The field of trace gas sensing is presently advancing in many different directions ranging from biomedicine to environmental monitoring or analytical chemistry, plasma physics and laboratory astrophysics. The cavity-enhanced dual-comb spectroscopy technique might find many important applications for practical spectroscopy. 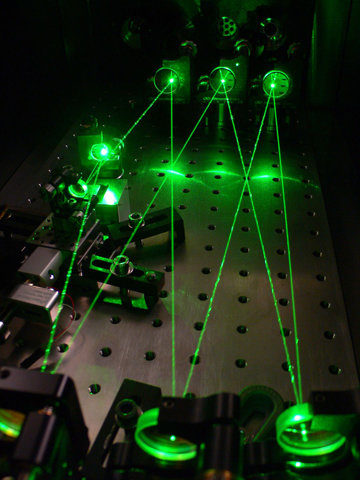 Figure: A high-finesse cavity, in which all the resonant equidistant modes of a laser frequency comb are simultaneously injected, produces a dramatic increase of the interaction length of the light-field and intracavity-matter. The resulting ultrasensitive broad-spectral-bandwidth transmission spectrum is measured in real-time with another comb.

This picture represents a part of the high-finesse passive resonator similar to the one that has been used to enhance the sensitivity of frequency comb based Fourier transform spectroscopy. The green light coupled to the resonator comes from a frequency-doubled Ytterbium-doped fiber frequency comb. While the letter (doi:10.1038/ nphoton.2009.217) published in Nature Photonics reports spectroscopic results around the fundamental infrared 1040-nm wavelength of the Ytterbium femtosecond lasers, the implementation of the same kind of experiments around the Yb-laser second harmonic, where interesting rovibronic molecular transitions are lying, is underway.

[1] The collaboration between the Max Planck Institute for Quantum Optics of the Max Planck Society and the Laboratoire de Photophysique Moléculaire du Centre National de la Recherche Scientifique is performed in the frame of the “European Laboratory for Frequency Comb Spectroscopy” European Associated Laboratory.