On quantum paths through the helium atom

Researchers of the Max Planck Institutes for Nuclear Physics and Quantum Optics investigate for the first time helium atoms by means of electron holography in ultra-short laser pulses.

How do electrons move inside an atom and what happens in detail if this motion is distorted? So far, only theoretical physics could answer these questions since a time-dependent imaging of such processes was beyond the scope of available experimental methods. Attosecond physics provides a new promising approach with a precision better than a millionth of a billionth second. In a joint experiment at the Max Planck Institute for Quantum Optics (MPQ) in Garching, fellow researchers of Prof. Joachim Ullrich (Max Planck Institute for Nuclear Physics, Heidelberg) and the Junior Research group of Dr. Matthias Kling (MPQ) demonstrate that electrons from the ionization of helium in ultra-short laser pulses show a holography-like interference. This forms an essential basis for electron holography of atoms (Physical Review Letters 103, 053001 (2009), Advance Online Publication July 27, 2009).

The great dream of physicists – capturing the structure and dynamics of time-dependent quantum systems in detail – has become more and more reality during recent years through substantially advanced experimental methods. One of the biggest challenges is the imaging of electrons in an atom since its motion takes place within attoseconds (10-18 s). Thus, in order to get a deeper insight into the electron cloud, Max Planck researchers utilize the electron’s ability to interfere with itself due to its quantum wave nature. Interference is also the basis of optical holography: here, a beam splitter directs light waves on two paths, and one of them illuminates the object to be investigated. The reflected light is then superimposed with the direct beam creating an interference pattern which contains complete information about the sample and allows its reconstruction.

In the current experiment the helium atom itself plays the role of the beam splitter being exposed to a few-cycle laser pulse: the electron can only be pulled out of the atom by the laser field within a very short time interval, i.e. if the amplitude of the oscillating field has reached a maximum. In case of the sine-type evolution of the electrical field used in the experiment (see Fig. 1) one finds exactly two ionization times t1 and t2.

An electron launched at t1 is forced by the oscillating field to turn back and pass its parent ion before it finally leaves the atom. During the passage the electronic wave packet picks up information about the parent ion’s internal structure. Being launched at t2 the electron escapes directly without detour (Fig. 1). If the electron’s direction and velocity is finally identical and, thus, both possible quantum paths indistinguishable, interference occurs like in the well-known double-slit experiment (Fig. 1). Akin to optical holography the parent ion consisting of the nucleus and the residual second electron is scanned by the first wave packet whereas the electron launched at t2 forms the reference beam.

The electrons are recorded by a ‘reaction microscope’ developed and built at the MPI and installed at the AS-1 beam line at MPQ for the joint experiment. Linearly-polarized ultra-short (5 fs) laser pulses at 740 nm are generated with a repetition rate of 3 kHz and focused in an ultrahigh vacuum chamber onto a supersonic helium gas jet.

The reaction products – electrons and helium ions – are directed towards two detectors by means of weak electric and magnetic fields. The direction and velocity of the particles is derived from their time of flight and position on the detector.

The physicists compared the velocity distributions measured as described above with results of a theoretical model calculation (Fig. 2) by Dieter Bauer (MPIK). The data agree qualitatively very well, although the model does not include the full complexity of the helium atom. Hence, the researchers conclude that the observed interference pattern was indeed generated by a true two-slit arrangement. The slits are determined by the two time windows where the electron can be launched. It follows from the observed pattern that the effective width of the slits amounts only to 20 attoseconds. Thus, the electron’s three-dimensional velocity distribution, obtained by means of the reaction microscope, comprising the interference pattern could be envisaged as a time-dependent hologram of the helium ion.

The fellow researchers of Ullrich and Kling ascribe a large potential to this method, to gain further advancement in imaging the inner dynamics of atoms and more detailed time-resolved information about atomic and molecular structure. A better control of the laser pulse shape could for instance resolve variations in the electron cloud of the atom’s ionic core on an attosecond time scale.

Fig. 1: Ionization of helium in an ultra-short laser pulse. The electron is launched from the atomic potential (blue funnel) at t1 or t2, i. e. at the maxima of the electric field amplitude (yellow curve). Both paths sample the parent ion differently. The corresponding wave packets of the escaping electron are finally superimposed (right) leading to interference. 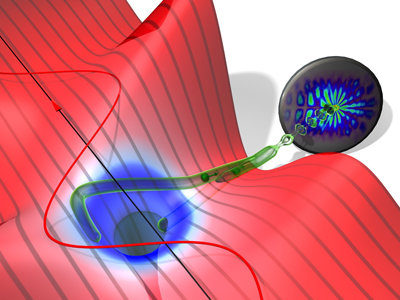 Fig. 3: An artist’s view of the ionization of helium in an ultra-short laser pulse and the two paths of the electron to the detector, where an interference pattern emerges