MPQ-LMU physicists use microwaves for interferometer experiment with atoms

The ability to store and to manipulate ultracold atomic clouds in chip-based microtraps – known as 'atom chips' – has been available for some time. On the one hand, atom chips enable experiments on fundamental questions of quantum physics. In addition, they are of interest for applications, as they combine precision control of atomic quantum systems with a compact, robust and potentially portable experimental setup. For instance, a chip-based atomic clock, which is suitable for portable use, has already been developed using this technology. A team of scientists led by Professor Theodor W. Hänsch and Dr. Philipp Treutlein (Ludwig-Maximilians-Universität Munich and Max Planck Institute of Quantum Optics in Garching) has now for the first time manipulated chip-based atomic quantum gases using microwave near-fields. As reported in Nature Physics (Advance Online Publication, DOI:10.1038/Nphys1329, 5 July 2009), they have harnessed microwave technology to perform a kind of double-slit interferometer experiment with atoms. Such chip-based 'atom interferometers' are of interest as portable precision sensors for measuring extremely weak electromagnetic fields or slight changes in gravitational force, for example. In addition, the microwave technology demonstrated here is a key ingredient of chip-based quantum gates, which are required for quantum computers. 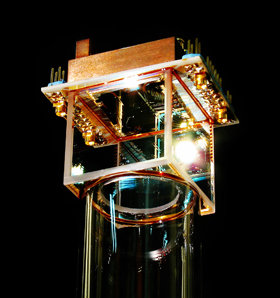 Adapting an existing technology for a novel use, quantum physicists are now using microstructured chips, somewhat similar to those originally developed for conventional computers, as laboratories for the precise manipulation of atomic quantum gases. The first chip-based atom trap was developed in 1999 by a group led by Theodor Hänsch and Jakob Reichel. The scientists realized that the magnetic fields of electric currents passing through microstructured wires on a chip could be used to trap individual atoms or atomic clouds just a few micrometres away from the chip surface. This was the birth of the "atom chip".

In the experiment described here, a cloud of rubidium atoms is trapped in this way on a chip inside a vacuum chamber, which isolates the atoms from the environment. Using special cooling techniques (laser cooling and evaporative cooling), the atoms are cooled to a few millionths of a degree above absolute zero. At these temperatures the atoms form a Bose-Einstein condensate (BEC), a novel quantum state of matter predicted by Bose and Einstein in 1924 and achieved in the laboratory for the first time in 1995. In this state, all degrees of freedom of the atoms, both motional and internal, are in a well-defined quantum state, which is the same for all atoms. This state can then be manipulated using the chip in order to explore fundamental questions of quantum physics such as wave-particle duality or entanglement.

However, the physicists have also used a system of this type to develop applications such as a chip-based atomic clock, for example, which is suitable for portable use. They exploited the fact that the atoms in the BEC can be brought into a quantum mechanical superposition of two different internal states and that the transition frequency between the two states can be used as a reference for time measurements. The quantum mechanical superposition state of the atoms survived for more than a second. That is a precondition for precision atomic clocks and for the interferometric measurements which were performed in the next stage.

The atom interferometer developed in this next phase is based on a novel technique: the integration of microwave fields onto an atom chip. A short pulse from a first microwave field serves to prepare the internal state of the atoms in the quantum mechanical superposition state. A second microwave field generates a potential whose influence on the atoms is dependent on their internal state. This results in a coherent splitting of the BEC into two spatially separate matter wave packets. If a picture is taken at this point, it shows two distinct, spatially separated atomic clouds. If, however, the two BEC wave packets are recombined again (without taking a picture in the split state) by reducing the microwave potential and applying a second pulse between the internal states, interference is observed. In this way the physicists were able to demonstrate that in the split state the atoms existed in a coherent quantum mechanical superposition of two clearly separate locations – a variant of the double-split experiment with atoms.

In order for interference to be observed, the superposition state of the atoms has to be maintained throughout the entire splitting and recombination process. In particular, the phase of the superposition must not be disturbed by uncontrolled variations in the potential or other environmental influences. The observation of a stable interference pattern proves that these conditions were met in the present experiment.

The phase of the interference pattern is susceptible to external forces, for example to gravity or to electromagnetic fields, and this can be used to measure these forces. A special feature of this atom interferometer is that the phase can be read not from the motional state but from the internal state of the atoms, as in an atomic clock. This leads to a higher resolution in reading out the interferometer, since only the atom number in the two states has to be determined. There is no need for a spatial resolution of the interference pattern.

The property of microwave potentials to act differently on the two internal states is the key to the preparation of novel quantum states of the Bose-Einstein condensate, such as squeezed states for example. In a squeezed state, the quantum-mechanical uncertainty of one of two complementary observables linked by the Heisenberg uncertainty relation is reduced at the price of increasing the other. These squeezed states allow further enhancement of the precision with which the phase of the interferometer can be read out. In the present experiment the scientists were able to observe first indications of squeezing, which will be investigated in more detail in a further experiment.

Another possible application, which lies somewhat further in the future, is a chip-based quantum computer. In this context atom chips have the advantage of combining the excellent coherence properties of atoms (quantum mechanical superposition states lasting for more than one second) with a scaleable, chip-based technology. A detailed theoretical proposal for a quantum gate on an atom chip already exists. The potentials based on microwave near-fields, which were realized for the first time in the present experiment, are a key technology for its experimental implementation. [PT/OM]