Individualism emerging from the urge to survive

Researchers at MPQ unveil a mechanism that creates structure in cold molecular gases.

Ultracold quantum gases made of strongly correlated particles are important models for the understanding of solid-state systems. Strong correlations between particles usually arise from elastic interactions between the particles. Researchers of the Quantum Dynamics Division of Prof. Gerhard Rempe and the Theory Division of Prof. Ignacio Cirac at the Max Planck Institute of Quantum Optics (Garching), in collaboration with J. García-Ripoll from the Universidad Complutense de Madrid, now demonstrate, that strong correlations can alternatively be created by inelastic interactions. In this system, the correlations keep the particles away from each other und thus loss processes that would usually arise from the inelastic character of the interaction are suppressed (Science, June 6th 2008). Molecules stored in an optical lattice shaped like a corrugated metal sheet could in principle move freely in one direction, but they prefer to remain lined up periodically to avoid collisions that would lead to loss. This experiment leads the way for work on other quantum systems in which strong correlations can also be expected to arise from inelastic interactions.

Macroscopic properties such as magnetism or high-temperature superconductivity result from a complex interplay of many particles, which are strongly correlated, that is to say, they greatly influence each others behaviour. It is crucial whether the particles are fermions or bosons: bosons at low temperature prefer to occupy the same state. This behaviour is realized in its clearest form in a Bose-Einstein condensate, in which approximately 100 000 particles merge to form a super-atom and a single atom no longer differs from the others in its quantum properties. Fermions, however, must differ from each other in at least one quantum number, which automatically makes them strongly correlated.

In the experiment described here, bosonic molecules display this very behaviour of fermions; and this individualism saves them from their mutual destruction. The physicists begin with the preparation of a Bose-Einstein condensate of rubidium atoms (which are bosons) and load it into a three-dimensional „optical lattice“. This is a crystalline structure that consists of light and is created by overlapping three standing light waves, one along each coordinate axis. The resulting laser light field resembles a stack of egg-cartons, where the atoms settle down in the dimples. Each site is occupied by exactly two atoms. Next, a magnetic field is applied to address a so-called Feshbach resonance, which makes the previously unbound atoms undergo a chemical reaction to fragile molecules. At this stage, the depth of the dimples is chosen such that each molecule is trapped at its site and cannot move to neighbouring sites.

But what happens if the optical lattice is subsequently modified such that it takes on the form of a stack of corrugated metal sheets? Such a transformation of the lattice geometry can be realized by changing the power of the applied laser light. The molecules, lined up like pearls on a string, are now free to move along a trough — at least in principle. Intuitively one might suspect that the molecules will collide with their neighbours and be destroyed in the process due their fragility. This would result in a rapid decrease of the number of molecules.

Surprisingly, the experiment shows that the particles remain at rest and do not collide with each other. Dominik Bauer, a graduate student working on the experiment, explains why that is. “In principle, the molecules can be thought of as if they were soap bubbles. If they experienced too close an encounter with a neighbour in the trough, then both would disintegrate. But the molecules are subject to quantum mechanics, and so they behave differently. They keep their distance from each other. While they are bosons, they thus display a behaviour that is typical of fermions. In the jargon of the scientific community this is called fermionisation“.

The results of this experiment reveal possibilities to realize strongly correlated quantum states in systems, which would normally suffer from fast loss rates due to the violent interaction between particles. Hence, there is hope to create beneficial conditions in systems that are normally plagued by fast losses, so that the loss is reduced to an acceptable margin, thus enabling experiments within reasonable time scales. Owing to the generality of the mechanisms discovered in the experiment, this might open perspectives for new experiments not only in the field of cold gases but in a much broader field of science. [S.D. / O.M.] 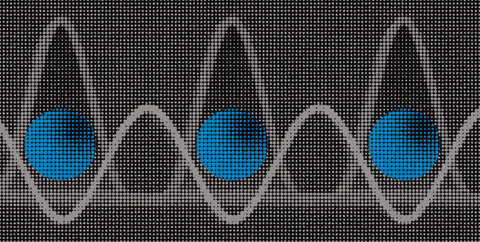 Fig. 1: Cold molecules (blue) are subject to a periodic potential. When removing the potential, the molecules would normally move freely. However, with a strong inelastic inter-particle interaction, the particles remain frozen in their initial state.