Atoms or Molecules? Both!

To be at the same time black and white, upwards and downwards directed– only the quantum particles belonging to the nanocosmos are able to take on two properties that are incompatible according to the laws of classical physics. Scientists around Prof. Gerhard Rempe at Max Planck Institute of Quantum Optics in Garching have now succeeded in observing a quantum state that represents a pure superposition of atoms and molecules. In Physical Review Letters (Phys. Rev. Lett. 99, 033201 (2007)) they report on experiments with pairs of Rubidium atoms in an optical lattice. Instead of being either two single atoms or two-atomic bound molecules the pairs oscillate between both states. The scientists have counted up to 29 of these so-called Rabi-oscillation cycles. While oscillating between the atomic and the molecular state the Rubidium pairs are at one point in both states with equal probability. Quantum particles being in such an ambiguous state provide the ideal properties for storing information in future quantum computers, i.e. they are the ideal candidates to act as quantum bits. Furthermore future precision measurements of the oscillation frequency may be a sensitive test for drifts of fundamental natural constants.

The experiment starts with cooling a cloud of Rubidium atoms in an optical trap down to a few billionth of Kelvin above zero. At this temperature the atoms form a Bose-Einstein Condensate: All particles – about 60 000 – become identical and virtually stop moving. Next an optical lattice is slowly ramped up. This is done by intersecting several laser beams from three directions. The shape of the resulting tiny light crystal resembles a stack of egg cartons, where the wells, or lattice sites, correspond to energetically favourable locations. As a consequence, the Rubidium atoms prefer to sit at these sites.

The distance between the atoms is determined by the wavelength of the laser light which is of the order of a few hundred nano (billionth) metres, thus being about 1000 times larger than the lattice constant of a solid state crystal. These kinds of ordered atom-light systems are therefore ideal to model some of the complex features of solid state crystals. The depth of the lattice sites depends on laser intensity. In the present experiment it is chosen such that the atoms are trapped inside the wells. The resulting highly ordered state is called a Mott insulator. Changing the overall atom number in the lattice, the physicists were able to create a situation with exactly two atoms per site in the centre of the lattice.

Under these conditions the transition of atom pairs into bound molecules can be steered in a controlled way and be measured precisely. On the one hand the atoms are isolated from their neighbours: they see only their lattice site partner. Being restricted to a very narrow area the number of molecular states they are allowed to occupy is very limited, too. On the other hand also the resulting fragile molecules are isolated from each other which prevent them from being kicked out by accidental collisions. 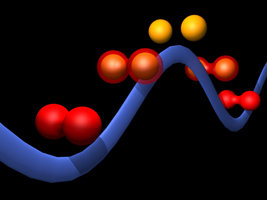 Figure 1:Rabi-Oscillations of atoms and molecules:By abruptly switching on a magnetic field atoms (yellow colour) can be transformed into molecules (red colour), and vive versa. At a particular time the particles pass a state of superposition in which they are atoms and molecule at the same time.

In order to get the transition going a magnetic field is abruptly switched on. Due to the interaction of the magnetic field with the magnetic moments of the atoms the probability of being single atoms or bound molecules becomes equal at certain strength. At this so-called “Feshbach” resonance the atoms start to oscillate between single hood and bound partner ship. Accordingly the amount of atoms respectively molecules in the optical lattice varies during an oscillation cycle.

Figure 2:Atoms and molecules in a lattice made of light: At the beginning each site in the centre of this highly ordered state is occupied by a pair of atoms (left). After a certain time the atom pairs have been converted into molecules (right). These two configurations were observed periodically.

By counting the number of atoms for different hold times of the magnetic field the scientists were able to observe the Rabi-oscillations over 29 cycles. „The importance of this result is that during one oscillation cycle the Rubidium pairs pass a state where they are atoms as well as molecules at the same time“, explains Niels Syassen, who has performed the measurement in cooperation with colleagues while working on his PhD thesis. “Such a coherent superposition state has not been observed before“, Prof. Gerhard Rempe points out. “This provides new possibilities for building quantum registers that store different sorts of information on one single quantum bit.”

Figure 3:Experimental data of the Rabi-Oscillations: In the experiment the total number of atoms is measured as a function of time. In the observed maxima of the oscillation period the system consists of pairs of atoms while in the minima the atoms are bound molecules..

In a further experiment the physicists used Rabi-oscillations in order to create two-atomic molecules in an optical lattice. They then changed the strength of the magnetic field to values at which the atoms would rather prefer to be single than to be bound molecules. The partnership however still holds on in most cases, since dissociation of the molecule is only allowed for certain, discrete values of the magnetic field. In between there exist no quantum states single atoms are permitted to occupy. This demonstrates the possibility to create an environment that makes it possible to handle fragile molecules as if they were stable. In the future the scientists plan to determine these atom-molecule-oscillations with even more precision. That way they expect to acquire a better knowledge of certain atomic properties. This in turn would help to test theories, which predict small drifts of fundamental natural constants.  [O.M./N.S.]