A Single-Photon Server with Just One Atom

Physicists at MPQ have succeeded in turning a Rubidium atom into a single-photon server.

Every time you switch on a light bulb, 10 to the power of 15 (a million times a billion) visible photons, the elementary particles of light, are illuminating the room in every second. If that is too many for you, light a candle. If that is still too many, and say, you just want one and not more than one photon every time you press the button, you will have to work a little harder. A team of physicists in the group of Professor Gerhard Rempe at the Max Planck Institute of Quantum Optics in Garching near Munich, Germany, have now built a single-photon server based on a single trapped neutral atom (Hijlkema et al. , Nature Physics, nphys569, published online March 11, 2007). The high quality of the single photons and their ready availability are important for future quantum information processing experiments with single photons. In the relatively new field of quantum information processing the goal is to make use of quantum mechanics to compute certain tasks much more efficiently than with a classical computer.

A single atom, by its nature, can only emit one photon at a time. A single photon can be generated at will by applying a laser pulse to a trapped atom. By putting a single atom between two highly reflective mirrors, a so called cavity, all of these photons are sent in the same direction. Compared with other methods of single-photon generation the photons are of a very high quality, i.e. their energy varies very little, and the properties of the photons can be controlled. They can for instance be made indistinguishable, a property necessary for quantum computation. On the other hand, up to now, it was not possible to trap a neutral atom in a cavity and at the same time generate single photons for a sufficiently long time to make practical usage of the photons.

In 2005 the team around Prof. Rempe was able to increase the trapping times of single atoms in a cavity significantly by using three dimensional cavity cooling. In the present article they report on results where they have been able to combine this cavity cooling with the generation of single photons in a way that a single atom can generate up to 300,000 photons. In their current system the time the atom is available is much longer than the time needed to cool and trap the atom. Because the system can therefore run with a large duty cycle, distribution of the photons to a user has become possible: The system operates as a single-photon server. 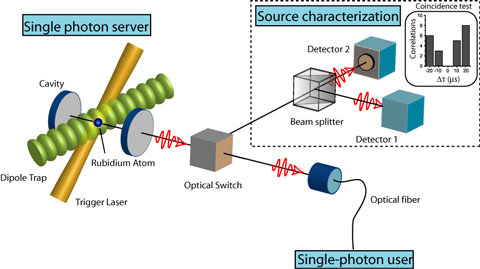 Fig. 1: A single atom trapped in a cavity generates a single photon after being triggered by a laser pulse. After the source is characterised, the subsequent photons can be distributed to a user. (Max Planck Institute of Quantum Optics)

The experiment uses a magneto-optical trap to prepare ultracold Rubidium atoms inside a vacuum chamber. These atoms are then trapped inside the cavity in the dipole potential of a focused laser beam. By applying a sequence of laser pulses from the side, a stream of single photons is emitted from the cavity. Between each emission of a single photon the atom is cooled, preventing it from leaving the trap. To show that not more than one photon was produced per pulse, the photon stream was directed onto a beam splitter, which directed 50% of the photons to a detector, and the other 50% to a second detector. A single photon will be detected either by detector 1 or by detector 2. If detections of both detectors coincide, more than one photon must have been present in the pulse. It is thus the absence of these coincidences that proves that one and not more than one photon is pro-duced at the same time, which is demonstrated convincingly in the work presented.

With the progress reported by Hijlkema et al., quantum information processing with photons has come one step closer. With the single-photon server operating, Gerhard Rempe and his team are now ready to take on the next challenges such as deterministic atom-photon and atom-atom entanglement experiments.