Prof. Theodor W. Hänsch has been named a Fellow of the National Academy of Inventors (NAI).

The 94 newly elected NAI Fellows will be inducted by Deputy U.S. Commissioner for Patents during the 3rd Annual Conference of the National Academy of Inventors, on March 7, 2014. 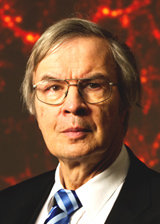 The U.S. National Academy of Inventors (NAI) has announced on December 10, 2013, that Professor Theodor W. Hänsch has been elected Fellow of the NAI. The 94 newly elected NAI Fellows will be inducted by Deputy U.S. Commissioner for Patents Andy Faile, from the United States Patent and Trademark Office, during the 3rd Annual Conference of the National Academy of Inventors, on March 7, 2014, in Alexandria (Virginia), at the headquarters of the United States Patent and Trademark Office.

Professor Hänsch has received many scientific prizes and awards. Among others he was awarded the Gottfried Wilhelm Leibniz Prize of the Deutsche Forschungsgemeinschaft in 1988. In 2006 the Großes Bundesverdienstkreuz mit Stern (Great Cross of Merit with Star) of the Federal Republic of Germany was conferred upon him. In June 2008 he became member of the 'Order Pour le mérite' which was established by the Prussian King Friedrich Wilhelm IV in 1842. In November 2011 he received the Wilhelm Exner medal from the Austrian ‘Gewerbeverein’.

Prof. Hänsch is a member of numerous scientific organisations and academies, for example, the European Physical Society, the Bavarian Academy of Sciences, the Pontifical Academy of Sciences, the Deutsche Akademie der Naturforscher Leopoldina. The invention of the laser frequency comb has led to a variety of tools used in many fields of photonics – from molecular spectroscopy to the calibration of spectrographs in astrophysics – that have gained patents both in Europe and the USA. A spring-off company Menlo Systems GmbH was founded in 2001. Olivia Meyer-Streng

The National Academy of Inventors® is a 501(c)(3) non-profit member organization comprised of U.S. and international universities, and governmental and non-profit research institutions, with over 3,000 individual inventor members and Fellows spanning more than 200 institutions, and growing rapidly. It was founded in 2010 to recognize and encourage inventors with patents issued from the U.S. Patent and Trademark Office, enhance the visibility of academic technology and innovation, encourage the disclosure of intellectual property, educate and mentor innovative students, and translate the inventions of its members to benefit society. The NAI edits the multidisciplinary journal, Technology and Innovation – Proceedings of the National Academy of Inventors, published by Cognizant Communication Corporation (NY). www.academyofinventors.org