ERC Synergy Grant for the Investigation of Ultracold Quantum Matter

For the first time the European Research Council (ERC) has introduced so-called Synergy Grants in 2012, which are intended to enable up to four scientists to collaborate on an innovative topic in order to jointly address complex research problems. Out of more than 700 project applications from all scientific disciplines, only 11 teams have been selected for funding, corresponding to a success rate of only 1,5%. Among the winners is the project UQUAM (Ultracold Quantum Matter) of Immanuel Bloch (Chair of Quantum Optics, Ludwig-Maximilians-Universität Munich and Max-Planck-Institute of Quantum Optics, Garching), Jean Dalibard (Collège de France and Laboratoire Kastler Brossel, Paris), Ehud Altman (Weizmann-Institute of Science in Rehovot, Israel), and Peter Zoller (Institute for Theoretical Physics, University of Innsbruck). For the funding period of six years the project will receive 10 million Euro of support.

One of the core components of the new project will be the construction of a novel joint experimental setup with which the researchers aim at reaching a qualitatively new level in understanding the complex behaviour of quantum matter. The two experimentalists Immanuel Bloch and Jean Dalibard, and the two theoretical physicists Ehud Altman and Peter Zoller belong to worldwide renown groups in this field which deals with the control, manipulation, and investigation of systems that contain thousands of quantum particles, at temperatures near absolute zero. Having been in close scientific contact for more than a decade, with mutual exchange of young doctoral candidates and postdoctoral scientists, the researchers now want to combine the knowledge and the technical know-how acquired in each group. “Some of the different techniques developed in each laboratory are working independently of each other, but we face the big challenge of bringing them together in one experiment in order to provide entirely new possibilities for observing and controlling quantum systems,” Bloch explains. “Joining our forces to design and build this new setup will allow us to take higher risk options, both in terms of technical choices and of ultimate goals that can be targeted”, Dalibard adds.

The quantum many-body systems investigated here are versatile models for real material systems. In the future the researchers also plan to explore connections between ultracold quantum matter and high energy and nuclear physics. By bringing the systems into unexplored parameter regimes, the team hopes to find states of matter that do not exist in our everyday nature. “In the wide range of phenomena it will allow to explore and as a test bed for theoretical ideas the planned experiment is a theorist’s dream”, says Altman. A main task for the two theoreticians will be to explore the broad range of quantum phases that can be created in this way and identify key questions to be addressed in the experiment. All members of the four teams will work together closely on the evaluation and interpretation of the experimental data. “It is exciting for a theorist to work in a team at the interface between novel and fundamental theoretical concepts and ideas, and the experimental effort by leading laboratories to see new quantum phenomena.“ Zoller points out.

”We are indeed very happy to have been awarded with a Synergy Grant following a very competitive selection process” Bloch says and continues. “The ERC synergy grant offers entirely new possibilities for intense cooperation, with unique research opportunities for junior scientists.” [OM] 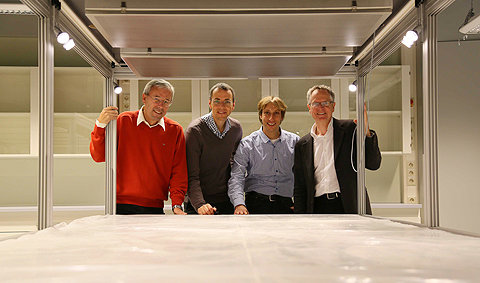