Dr. Christof Weitenberg, a former PhD student in the group of Professor Immanuel Bloch at the Max Planck Institute of Quantum Optics in Garching near Munich, has been awarded the Otto Hahn Medal 2011 of the Max Planck Society (MPG).

Since 1978 the MPG honours about 40 young scientists each year for their outstanding scientific achievements. The award is meant to encourage highly talented people to pursue a career in fundamental research. Dr. Weitenberg receives the medal, which comes with a monetary recognition, for “his work on the realization of a quantum gas microscope and on the addressing of single atoms in ultracold quantum gases”. 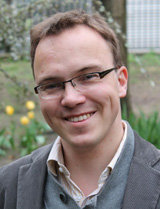 Christof Weitenberg was born in Rhede in 1981 (NRW, Germany). In 2001 he began his studies of physics at the Universität des Saarlandes in Saarbrücken, at the same time registering in musical composition at the Hochschule für Musik Saar, where he got his diploma in 2005. As a scholar of the “Studienstiftung des deutschen Volkes” he completed his physics studies in 2007 with a diploma. He started his doctoral thesis in the group of Professor Immanuel Bloch, who at that time had a chair in physics at the Johannes Gutenberg-Universität Mainz. After Professor Bloch had been appointed director at the MPQ in 2008, he continued his doctoral work on “Single-atom-resolved imaging and single-spin addressing in an atomic Mott insulator” at the institute in Garching. In 2011 Christof Weitenberg received his doctoral degree from the Ludwig-Maximilians-Universität with “summa cum laude”. Subsequently, he became a fellow of the Alexander von Humboldt-Foundation and moved to the Laboratoire Kastler Brossel, Ecole Normale Supérieure (ENS) in Paris to the group of Jean Dalibard. This year he obtained a Marie Curie-Fellowship of the European Union.

The central subject of his thesis was the detection and the manipulation of single atoms of an ultracold atomic quantum gas. The cold atoms are sitting in an artificial crystal of light, which is created by the superposition of several laser beams. They serve as a well-controlled model system for electrons in a solid-state material. Just like the electrons, the atoms can e.g. either freely move through the lattice or be pinned to their lattice site due to their mutual interaction. The latter case is called a Mott insulator.

Within his thesis work in the team of Professor Immanuel Bloch and Professor Stefan Kuhr (now at University of Strathclyde, Glasgow) Christof Weitenberg developed techniques that for the first time allowed imaging single atoms in this Mott insulator. In this way, the researchers could directly observe the distribution of the atoms on the lattice sites, which characterizes the respective state of the quantum gas. Furthermore, it was possible to address and manipulate single atoms with the help of a strongly focused laser beam – a vital step towards a quantum computer built of cold atoms.

At the ENS, Weitenberg now studies the behaviour of the cold quantum gases in the presence of an artificial magnetic field.

Dr. Weitenberg will receive the Otto Hahn Medal on the occasion of the General Meeting of the Max Planck Society in Düsseldorf on June 13, 2012. Olivia Meyer-Streng