The physicist is awarded for his research on the control of chemical reactions through the steering of electrons with light pulses. 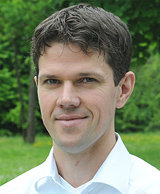 Matthias Kling, leader of the research group “Attosecond Imaging” at the Max Planck Institute of Quantum Optics (MPQ), was awarded with the Nernst-Haber-Bodenstein prize of the German Bunsen Society for Physical Chemistry (DBG). With this prize the society honors outstanding scientific achievements of young scientists in the area of physical chemistry. Matthias Kling was awarded for his experimental work on the control of electron and nuclear dynamics in molecules, in particular the laser-induced localization of electrons on femto- to attosecond timescales.

How can chemical reactions be controlled via the steering of electrons in molecules? The scientific career of Matthias Kling is strongly connected to this question. In 2006, as a postdoc in the group of Marc Vrakking, he was amongst the pioneers who could give a groundbreaking answer to this question. Using a laser pulse of only a few femtoseconds (a femtosecond is a millionth of a billionth of a second) duration with precisely controlled electric field waveform, it was possible to steer an electron between two nuclei in a deuterium molecule.

The precise control of electrons with light pulses opens the door to a new way to control the reactions of molecules. The work of Matthias Kling and his team have shown that this type of control is also possible for complex molecules. Together with Regina de Vivie-Riedle (who was awarded the Nernst-Haber-Bodenstein prize in 2003) from theoretical chemistry they contributed to the fundamental understanding of the relevant mechanism underlying the control.

The control of chemical reactions via the steering of electron motion is still in its infancy. Matthias Kling is convinced of the potential of this technique. “Recent developments in laser physics permit the shaping of lightwaves”, says Kling. “That will allow directing electrons in molecules with even higher precision.”

The prize was presented to Matthias Kling at the Bunsentagung (annual conference in Germany on physical chemistry) in Leipzig, Germany, on the 17th of May by the DBG president Martin Quack.

The DBG is a non-profit scientific and technical society based in Frankfurt on Main. It was founded in 1894 and since 1902 has been known as the German Bunsen Society for Applied Physical Chemistry in honor of the famous physical chemist Robert Wilhelm Bunsen. The DBG is engaged in national and European research and education policy and offers its members a forum for the exchange of ideas and know-how and for the support of their activities. Thorsten Naeser