Professor Peter Zoller is elected as “Distinguished Fellow” by the board of directors at MPQ.

The Max Planck Institute of Quantum Optics has launched a “Distinguished Fellow Programme” which offers eminent scientists from other research institutes worldwide a new frame for cooperating with the institute, working there for a couple of months in one of its scientific divisions. Professor Peter Zoller, Chair of Theoretical Physics at the Leopold Franzens Universität Innsbruck and Director at the Institute of Quantum Optics and Quantum Information (IQOQI) of the Austrian Academy of Sciences in Innsbruck (Austria), has been the first one to be elected as “Distinguished Fellow” by the board of directors at MPQ. He has been nominated by Professor Ignacio Cirac in whose Theory division he will presumably be working from June to July 2012. 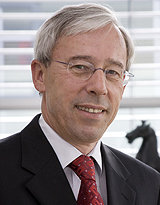 The main topic of Peter Zoller is the development of theoretical tools and concepts for storage, communication and processing of quantum information. Here the interaction of laser light with atoms plays a crucial role. In 1995 he published, together with Ignacio Cirac, a pioneering and attention drawing work describing a (at that time) new concept of processing quantum information with extremely cold ions trapped in electromagnetic fields. By now, these systems are being investigated both theoretically and experimentally worldwide and are considered to be the most advanced on the way to universal scalable quantum computers. Photo: C. Lackner

Professor Zoller’s group in Innsbruck investigates different kinds of quantum systems, from single atoms trapped inside optical cavities of extremely high finesse to ultracold quantum gases made of up to a billion particles. Systems of that kind could be used in the development of quantum computers. In particular, the group is interested in quantum many body systems of molecules with a strong dipole moment, sitting in an optical lattice. Here, the interaction between the dipole moments can lead to exotic quantum phases. Ordered quantum gases in optical lattices can serve as models for solid state structures and may lead to a deeper understanding of properties such as magnetism or superconductivity. Among other topics, Professor Zoller’s group is also developing hybrid quantum circuits where ensembles of cold polar molecules serve as long-lived memories and optical interfaces for solid state quantum processors.

Prof. Zoller has been presented with numerous scientific prizes and awards. Among those are the Max Born Award 1998 (Optical Society of America), the Wittgenstein Award 1998 (Austrian Federal Ministry of Science, Austrian Science Foundation), the Niels Bohr/UNESCO Gold Medal 2005, the Max Planck Medal 2005 (German Physical Society), the Dirac Medal of the International Centre for Theoretical Physics (ICTP) in Triest in 2006, the “BBVA Foundation Frontiers of Knowledge Award in Basic Sciences 2008”, the Benjamin Franklin Medal of the Franklin Institute in Philadelphia (USA) in 2009, and the Blaise-Pascal-Medal in Physics of the European Academy in Sciences in 2011.

“It is a great honour and privilege to have this renowned scientist stay at our institute”, Professor Cirac emphasizes. “We have been in very close scientific contact for a long time, and I am looking forward to inspiring discussions and new common projects with this longstanding friend of mine.” Olivia Meyer-Streng