During the annual NIWeek conference in Texas the team of Professor Rempe has received three prizes.

During the annual NIWeek conference in Austin (Texas) the team of Professor Gerhard Rempe, Director at the Max Planck Institute of Quantum Optics (Garching near Munich), has received three prizes: The “Application of the Year 2011 Award”, the “Advanced Research Award” (both from National Instruments) and the “FPGA Innovation Award”, given by the company Xilinx. The team was recognized for an outstanding solution to a challenging scientific problem, described in its "FPGA-based Feedback Control of a Single Atom Trajectory" paper, using both programmable chips from Xilinx and the graphical design language developed by National Instruments. At the award ceremony on August 2, 2011, the awards were presented to Christian Sames, a doctoral student responsible for the technical realization of this project, on behalf of the design team members. 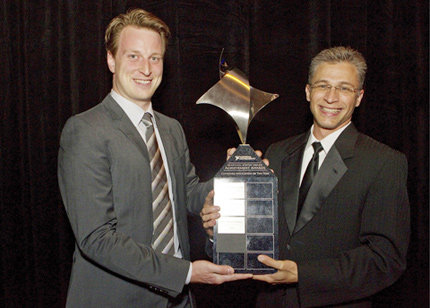 Christian Sames, received his Diploma in Physics at the Technische Universität München in 2008. His diploma thesis work was carried out at the University of Toronto (Canada). Before then he had studied physics at the École Polytechnique Fédérale de Lausanne (EPFL) (Switzerland) for one year. Since the summer of 2008 Christian Sames is doctoral student in the Quantum Dynamics Division of Professor Rempe, participating in the International PhD Programme of Excellence on Quantum Computing, Control and Communication (QCCC), which is part of the Elitenetzwerk Bayern. There he works on the controlled interaction of single atoms, trapped inside a high-quality optical resonator, with single photons.

In order to study fundamental quantum properties of the light-matter interaction, the atom is required to be localized in the centre of this resonator. Inherent heating processes, however, tend to drive the atom away to different positions. This motion has to be suppressed with fast electronic feedback techniques, which have to be evaluated on time scales on the order of a hundred nanoseconds.

The newly developed feedback electronic is based on FPGAs (Field Programmable Gate Arrays) from Xilinx. These integrated circuits are designed to be configured by the customer after manufacturing. Christian Sames employed the graphical design language “LabView FPGA” from National Instruments to achieve this task. Using this new system the performance of the feedback scheme was significantly improved compared to traditional systems.

Christian Sames is delighted that his work and the work of the team received these recognitions. Funny enough, the sheer size of the trophies exceeded the baggage limit on the return flight. Olivia Meyer-Streng