Their proposals have been selected out of 4080 applications submitted at the fourth ERC Starting Grant call in fall 2010.

Two scientists from the Max Planck Institute of Quantum Optics, Dr. Randolf Pohl and Professor Stefan Kuhr, have successfully applied for the “European Research Council Starting Grant”. Their proposals have been selected out of 4080 applications submitted at the fourth ERC Starting Grant call in fall 2010. The European Research Council founded in 2007 is the first pan-European funding body. Its main aim is to stimulate scientific excellence by “supporting and encouraging the very best, truly creative scientists, engineers and scholars to be adventurous and take risks in their research.” In the long term, it looks to substantially strengthen the European research system. ERC grants support projects headed by young and established researchers over a period of five years.

Focusing on the fundamental constants: Randolf Pohl studied physics at the Technische Universität München where he received his diploma in 1997. He completed his doctoral thesis at the Eidgenössische Technische Hochschule (ETH) in Zürich (Switzerland) in 2001. From 2001 to 2005 he was working as a post-doctoral researcher at the Paul-Scherrer-Institut (PSI) in Villigen (Switzerland). Since then Dr. Pohl is a member of the Laser Spectroscopy Division of Professor Theodor W. Hänsch at the MPQ. Here he dedicates his research to the investigation of “muonic atoms” in which one of the electrons is replaced by the 200 times heavier muon. These experiments are carried out within a large international collaboration at PSI.

Spectroscopy of muonic hydrogen in 2010 yielded a tenfold precision in the measurement of the protonic radius. However, the result showed a large discrepancy with previous measurements. The new project “Charge Radius Experiment with Muonic Atoms” is meant to solve this puzzle. By extending the spectroscopy of muonic hydrogen to muonic helium it will be possible to measure the size of its nucleus with tenfold precision. This will also shed some light on the proton size puzzle. “I have spent twelve years on measuring the charge radius of the proton”, Randolf Pohl says. “It may again take a long time to find the resonance of muonic helium. On the other hand, when we are successful, the gain will be huge, as progress in fundamental physical constants is notoriously slow.” Dr. Pohl is, together with Dr. Franz Kottmann from PSI, spokesperson of both the muonic hydrogen and the muonic helium collaboration. 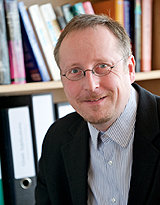 Control and manipulation of single atoms: Stefan Kuhr studied physics at the Universität Bonn (Germany), where he received his doctoral degree in 2003. He then worked as a post-doctoral researcher at the École Normale Supérieure in Paris. From 2006 to 2011 he was senior scientist and group leader with Professor Immanuel Bloch, first at the Universität Mainz, from 2008 on in the Quantum Many Body Division at the Max Planck Institute of Quantum Optics. In February 2011 he accepted a call as Professor (Chair) of Quantum Information at the University of Strathclyde, Glasgow, United Kingdom, remaining still affiliated with the MPQ.

His proposal for the project “Single-atom-resolved detection and manipulation of strongly correlated fermions in an optical lattice”, submitted to the ERC in 2010, is a follow-up of his activities on single atom detection and manipulation in optical lattices using bosonic particles. With the new experiments Professor Kuhr aims at achieving the same degree of control for fermionic atoms. Because the interaction of fermions with each other is quite different from the interaction of bosons, the new project requires a completely new experimental setup. Among others, this work will lead to a deeper understanding of the mechanisms that give rise to macroscopic properties of matter such as magnetism or superconductivity. It is a unique advantage of the ERC Starting Grants that the approved funds can be taken to another research site as long as it is in Europe. “The ERC grant will help me establish my Chair on Quantum Information at the University of Strathclyde”, Professor Kuhr emphasizes. “Perhaps we will be one of the first groups to observe and to manipulate strongly correlated fermions in an optical lattice with single-site resolution.” Olivia Meyer-Streng