The International Commission for Optics donates Reinhard Kienberger for his outstanding scientific contributions to Optics and Photonics. 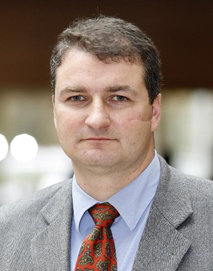 The International Commission for Optics donates this year’s ICO prize to Reinhard Kienberger for his “outstanding scientific contributions to Optics and Photonics”. Kienberger, a member of the Excellence Cluster Munich Centre for Advanced Photonics (MAP) and since September 2009 a professor of experimental physics at the Technische Universität München (TUM), has made pioneering contributions to the field of attosecond physics, having been for many years a close collaborator of Prof. Ferenc Krausz, Director at the Max Planck Institute of Quantum Optics in Garching and head of the Laboratory for Attosecond Physics.

One of the main goals of this new scientific discipline is to capture snapshots of the inner life of atoms. By this scientists expect to gain insights into the actual course of chemical reactions, the behaviour of electrons in solid materials, and the interaction between light and matter. “An attosecond is a billionth of a billionth of a second, an extremely short period of time,” Kienberger says. “This is the time scale on which the motion of electrons in an atom takes place. With extremely short light pulses, we can make this motion visible and investigate it.” New discoveries made through this approach could find application in chemistry, molecular biology, nanotechnology, and treatment of tumours.

Dr. Reinhard Kienberger comes from Saalfelden in Austria. In 2002 he got his doctoral degree in the group of Prof. Ferenc Krausz, then at the Technical University of Vienna, on the subject “Subfemtosecond XUV Pulse Generation and Measurement”. There he was the first ever to produce light pulses shorter than one femtosecond (a millionth of a billionth of a second). In 2004 he received the APART grant (Austrian Programme for Advanced Research and Technology) of the Austrian Academy of Sciences, which enabled him to spend 10 months at the Stanford Linear Accelerator Center (USA) in the same year. During this time he showed for the first time that techniques for characterizing laser-generated X-rays could be extended to femtosecond X-rays produced by an accelerator.

On his return from the USA in 2005 he became a research scientist in the “Attosecond Division” of Prof. Ferenc Krausz at the MPQ. In 2006 he received the Sofja Kowalevskaja Prize by the Alexander von Humboldt Foundation and set up the independent Max Planck junior research group “Attosecond Dynamics”. In 2007 he received the “Starting Grant” of the European Research Council, and in September 2009 he became appointed professor at the Technische Universität München. “Reinhard Kienberger’s excellent research work has made him, without a doubt, one of the leading scientists in this promising young field of physics,” says Prof. Ferenc Krausz. As from the beginning, Kienberger and Krausz are close collaborators.

With its prestigious ICO Prize, the International Commission for Optics singles out one researcher each year for outstanding contributions to optics made before the age of 40. The award brings with it the Ernst Abbe Medal, which Prof. Kienberger will receive when he presents an honorary lecture at a future meeting of the International Commission for Optics.