4D Films from the Microcosm

Motion in the microcosm is to be recorded.

Motion in the microcosm is to be recorded by a team at the Laboratory of Attosecond physics of LMU and MPQ by means of ultrashort flashes consisting of individual elecrons. The project is being funded with 2.5 million euro in an "ERC Advanced Investigator Grant" awarded by the European Union to Prof. Ferenc Krausz. 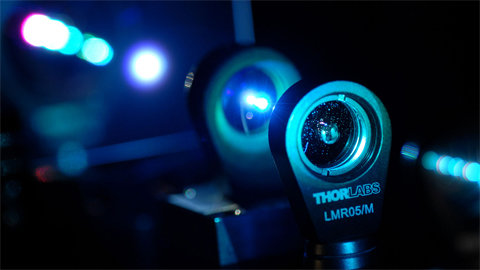 Electrons, atoms and molecules play the leading roles in the films to be produced by a team of laser physicists around Prof. Ferenc Krausz and Dr. Peter Baum in the project “4D Imaging of Fundamental Processes on the Atomic and Sub-atomic Scales”. As the particles in the microcosm move within attoseconds and femtoseconds, scientists have to be just as fast with their recording techniques. A femtosecond is a millionth of a billionth of a second, an attosecond being a thousand times shorter.

About 24 sequences per second are sufficient to run a film viewed by the human eye. But continuous recording of the ultrafast motion of atoms and their electrons requires a billion times as many sequences per second. Such films from the atomic world are now to be produced by a team of laser physicists headed by Dr. Peter Baum from the Ludwig Maximilians Universität of Munich and the Max Planck Institut für Quantenoptik at Garching. This is done with particle flashes consisting of solitary electrons and produced by means of laser light. The electron flashes last only femtoseconds to attoseconds. The physicists fire the electrons on atomcs and molecules, which in turn deflect the particles that are then detected. This provides so-called diffraction images of the samples, about 100 million billion pictures per second. These images record the motion of atoms and their inner life with ultimate resolutions, thus giving an insight into the course of chemical and physical reactions in nature.

For the first time technology is to convey not only a spatial notion of the structures within atoms and solids, but also the temporal course (4th dimension) of the fastest possible events in the microcosm. Thorsten Naeser