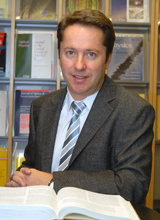 The Franklin Institute in Philadephia has awarded the 2010 Benjamin Franklin Medal in Physics to Professor Ignacio Cirac, Director at Max Planck Institute of Quantum Optics (Garching, near Munich), Dr. David J. Wineland (National Institute of Standards and Technology in Boulder (NIST), USA) and Professor Peter Zoller (University of Innsbruck, Austria). The scientists receive this award for “their theoretical proposal and experimental realization of the first device that performs elementary computer-logic operations using the quantum properties of individual atoms.” The Franklin awards were first bestowed in 1824. Recipients include e.g. Nobel Prize winners such as Albert Einstein and Marie Curie. The laureates will come to Philadelphia for a week of seminars and ceremony in April 2010.

Standard quantum computation is based on a system of quantum particles such as atoms or ions that serve to store and encode information. It exploits the unique property of these particles to take on not only states like ‘1’ or ‘0’ but also all kinds of superpositions of these states. Key elements in such a quantum computer are quantum gates that couple two qubits at a time. Every quantum computation can be decomposed in a sequence of elementary one- and two-qubit-gates.

In 1995 the theoretical physicists Cirac and Zoller were the first ones to propose a detailed concept for the realization of two-qubit-gates based on the use of ultracold trapped ions. Soon after David Wineland, leader of the Ion Storage Group at NIST, succeeded in the experimental demonstration of this proposal. Since than many research groups have contributed to improve this concept both from the theoretical and the experimental side. On the way to the realization of a universal quantum computer devices using ultracold stored ions are the most advanced up to now.

Professor Ignacio Cirac was born in the City of Manresa in 1965. He studied theoretical physics at the Universidad Complutense de Madrid where he received his PhD in 1991. He began his career in physics as a “Professor Titular” at the Universidad de Castilla-La Mancha where he stayed till 1996. In 1996 he became Professor at the department of Theoretical Physics at Leopold Franzens University Innsbruck. Since 2001 he is Director at the Max Planck Institute of Quantum Optics and head of the Theory Division.

Besides working on quantum computation the theory group of Prof. Cirac also develops theoretical tools to describe many-body quantum systems, which may lead to a better understanding of macroscopic phenomena such as superconductivity. Furthermore, Prof. Cirac and his collaborators created new theoretical tools to characterize and quantify entanglement, and participates in the creation of a new theory of information based on quantum mechanics.

Professor Ignacio Cirac has by now become one of the most renowned scientists in the field of quantum information and quantum computation. E.g., in 2005 he was awarded the “Quantum Electronics Prize” of the European Science Foundation. In May 2006 he was the youngest ever winner of the renowned Royal Spanish Prince of Asturias Prize, and in the same year he received the International Quantum Communication Award together with Professor Peter Zoller. In January 2009 he again shared the “Frontiers of Knowledge Award in Basic Sciences” of the Spanish BBVA Foundation with Professor Peter Zoller. Olivia Meyer-Streng