Prof. Lukin is among the first four out of ten scientists who are honoured this year with the “International Award for Research in Germany”. 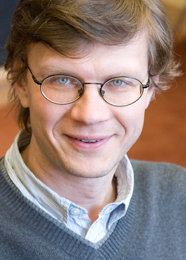 Mikhail Lukin, professor at Harvard University (Boston, USA) and right now on a sabbatical at Max Planck Institute of Quantum Optics, is among the first four out of ten scientists who are honoured this year with the “International Award for Research in Germany” of the Alexander von Humboldt Foundation. This “Alexander von Humboldt Professorship” was established in 2008. It aims at winning excellent scientists from abroad to perform ground breaking research at German universities. The award which is valued at up to five million EUR and endowed by the Federal Ministry of Education and Research gives universities the opportunity not only to offer top international researchers long-term prospects for working in Germany, but also to enhance their institutional profile.

Mikhail Lukin was born in Moscow on 10 October 1971. He studied applied physics and mathematics at Moscow Institute of Physics and Technology (MIPT). On completion of his studies in 1993 he joined the Department of Physics of Texas A&M University (College Station, Texas), at which he was awarded his PhD in physics in 1998 for his thesis entitled "Quantum Coherence and Interference in Optics and Laser Spectroscopy". During his PhD work Mikhail Lukin was a regular visiting scientist at Max Planck Institute of Quantum Optics in Garching, Germany in the years 1994 to 1998.

After a brief spell working as a postdoc at Texas A&M University he continued his research as a postdoctoral fellow at the Institute of Theoretical Atomic and Molecular Physics (ITAMP) at Harvard-Smithsonian Center for Astrophysics (CFA). Already in 2001 he received an assistant professorship at Harvard University, and just three years later was made a full professor.

Prof. Lukin has performed pioneering work in theoretical as well as in experimental physics. His work is concerned with topics at the interface between quantum optics, quantum many body systems and nanoscience. A central role is played by quantum nanosystems: solid state structures of such a small size that they are ruled by quantum physics. Among these systems are semiconductor quantum dots that can be used for storing and processing quantum information. Other tools are nanowires that can serve for connecting quantum dots by the exchange of single photons. Yet another of his research fields is the investigation of diamond vacancies in the view of a possible application in solid state quantum computers, and magnetometers with unprecedented precision. Quite a number of scientific awards testify the high impact of Professor Lukin’s work on science.

Being a visiting scientist at MPQ Professor Lukin is closely collaborating with his MPQ colleagues, in particular with Professor Ignacio Cirac (head of theory division), Professor Immanuel Bloch (head of quantum many body systems division), Prof. Gerhard Rempe (head of quantum dynamics division), and Professor Ferenc Krausz (head of attosecond and high-field physics division). But he is also in strong contact with Prof. Gerhard Abstreiter, director at Walther Schottky Institute for semiconductor electronics of TUM. Both MPQ and TUM would like to appoint the exceptional scientist as director and full professor respectively. The prize money of the Alexander von Humboldt Professorship implies a substantial increase of the research budget and may therefore make this option even more attractive. Olivia Meyer-Streng