LMU/MPQ scientists have demonstrated a method of heralding entanglement between distant stationary quantum systems without destroying this particular state. The experimental set-up paves the way towards quantum communication over large distances.

At present, theoretical and experimental physicists think of quantum networks as made of stationary nodes between which the quantum information is mediated by photons via optical fibres. Quantum mechanical entanglement between the stationary quantum systems plays a key role for large distance communication. However, due to the loss of photons in the glass fibres the extension of such networks is limited. A solution to this problem is offered by a so-called quantum repeater which passes the entanglement on over a sequence of many small sections, thus extending an entangled state over a long way. A team of scientists around Dr. Wenjamin Rosenfeld (Max-Planck-Institute of Quantum Optics in Garching, MPQ), Dr. Markus Weber (Ludwig-Maximilians-Universität München, LMU) and Prof. Harald Weinfurter (LMU and MPQ) has now developed a fundamental component of such a device. In their experiment two rubidium atoms, 20 metres apart, are entangled in such a way that a signal is generated each time entanglement is achieved (Science, 6 July 2012; DOI:10.1126/science.1221856).

In contrast to classical objects that are, for example, either black or white, quantum particles take on both “colours” at the same time. It is at the very last moment, at the process of measurement that the particles decide on one of the two possible properties. This peculiar behaviour becomes even more surprising, when two quantum objects form one entangled state in which their properties are strictly connected, i.e. quantum correlated. When the state of one particle, e.g. the polarization state of a photon, is determined in a measurement, we know immediately which one of the two states will be observed in the partner particle, independent of the distance between the particles. This seeming “action at a distance” is incompatible with the classical communication of information which obeys the rules of local causality. In 1964 the Irish physicist John Bell described this incompatibility in the form of a mathematical inequality.

Entanglement can be used to create communication channels between two nodes in a quantum network that are safe against eavesdropping: a bugging operation would immediately destroy the entanglement which would be noticed by decreasing correlations at the two nodes. Entanglement could also serve as a resource for the teleportation of quantum information over very large distances. The difficulty to overcome is the fact that a substantial part of the photons which are supposed to mediate the entanglement are lost due to scattering and absorption processes in the glass fibre. Now scientists around Harald Weinfurter have developed a first component of a quantum device which will help to compensate for these losses,

The basic concept is to create entanglement between two atoms, which are separated in space, with the help of photons, and to transfer this state onto succeeding atoms (stationary quantum systems respectively). Hence, two rubidium atoms, each captured inside an optical dipole trap, are stimulated by light pulses from a control laser to emit a photon. In this process the quantum state of the atom is entangled with the polarization state of the photon. Travelling through separate glass fibres the two photons reach a beam splitter where they are brought to interference. The simultaneous detection of two photons at different output ports of the beam splitter gives notice of successful entanglement. In absence of a signal the whole procedure is repeated. “We have to try for about a million times”, Professor Weinfurter explains the experimental difficulties which are mainly due to the loss of photons during their coupling to the glass fibre. “The confirmation of entanglement makes it easier to connect several such systems in series, like a chain, thereby extending the entanglement over the whole chain. Without such a signal we would have to use much more complex methods for the generation of entanglement.” 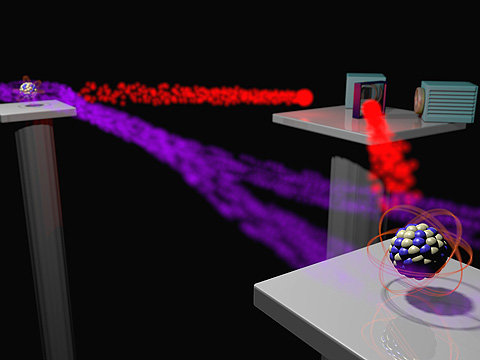 Figure: An experimental set-up, consisting of a beam splitter and two photo detectors, registers the photons emitted by the rubidium atoms (red beam) and generates a signal whenever the two atoms are in an entangled stated (illustrated by violet beams). Graphic: Wenjamin Rosenfeld

As the two parts of the experiment are already operating independently the whole experimental set-up is scalable to larger dimensions. The team hopes to achieve entanglement of two stationary systems up to distance of about 400 metres in a few years. Maybe, this experiment will also help to settle a controversy started by Albert Einstein in 1935. The renowned physicist had his doubts about the ambiguity of quantum particles and the influence of the observer on their properties. Einstein proposed, together with Boris Podolski and Nathan Rosen, that the properties are “hidden” in the particle, even before measurement. The new experiment has the potential of testing the validity of this theory. [OM]