Credit cards which are completely fraud-proof and passports which cannot be forged: quantum physics could make both of these possible. This is explained by the fact that the quantum mechanical state of a particle, an atomic nucleus, for example, can be neither copied nor read out correctly without additional information which only authorised users of possible cards have. Accordingly, if a credit card were to contain a quantum memory, it would be protected against misuse. Although physicists have already developed methods to write quantum states into different types of memory and read them out again, the problem is either that these methods work only just above absolute zero temperature which excludes routine use - or that the quantum information stored is lost after only a few milliseconds. Researchers at Harvard University in Cambridge near Boston, the Max Planck Institute of Quantum Optics in Garching, and Caltech in Pasadena have now successfully stored a quantum state in a diamond crystal for more than a second at room temperature. The researchers even believe that a storage time of one-and-a-half days is possible if they improve their method.

A quantum memory uses a more complex version of the smallest unit of information in a conventional computer memory, the bit, namely the so-called quantum bit, qubit for short. Whereas the bit can take only one of two possible states at any point in time (where one is designated with “0” and the other with “1”), the qubit can literally take both states simultaneously. Its information content consists in the respective weight of “0” and “1”: the qubit can consist of 20 percent “0” and 80 percent “1”, for example. Any ratio which sums up to yield 100 percent is possible. This means that many values can be stored in a single qubit. 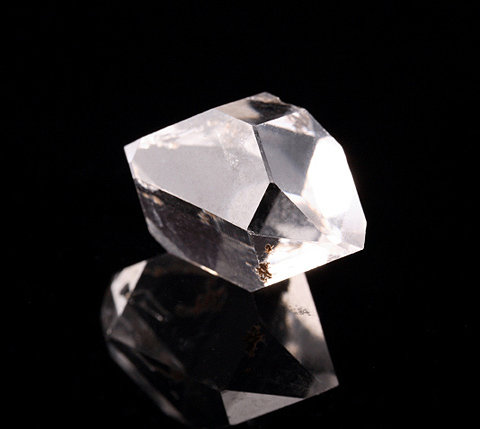 Figure: The stuff that quantum memories are made of: an international team of physicists has succeeded, for the first time, in storing a quantum bit in a diamond for longer than one second at room temperature. The researchers did not use a natural diamond like the one shown here, however, neither was it cut. They produced their diamond artificially by depositing carbon containing one hundredth of a percent of the heavy carbon isotope C-13 and a small quantity of nitrogen from the gas phase onto a substrate. The diamond they obtained in this way had an edge length of a few millimetres. Photo: iStockphoto

Physicists use various physical systems to store qubits, for example atoms, which are located in a lattice of crossed laser beams similar to eggs in an egg carton, or atomic nuclei in a solid body. In future, a quantum memory of several qubits could be used for forgery-proof data storage, as the so-called no-cloning theorem of quantum physics forbids the copying of quantum states. In addition, it is only possible to read out the contents if one knows the parameters with which the memory has been written, such as the polarisation direction of light signals.

A quantum memory must be isolated from the environment, but not completely

An almost insurmountable obstacle prevents its practical implementation. A quantum memory must fulfil two conflicting criteria: on the one hand, it must be isolated from the environment as much as possible so that the stored qubits are not destroyed by external magnetic fields, light particles or similar environmental influences. On the other hand, it must be able to exchange information with this very same environment; otherwise it would not possible to write information into the memory and read it out again. Thus the complete isolation of the qubits does not achieve the objective.

The international group of researchers from Harvard University, the Max Planck Institute of Quantum Optics and Caltech has now successfully reconciled the conflicting factors to such a degree that a qubit in an artificial diamond crystal can remain stable for more than a second, even at room temperature. Previously, this type of qubit was preserved for only a few thousandths of a second. “We’ve achieved this almost thousand-fold improvement with relatively little experimental effort,” says David Hunger from the Max Planck Institute of Quantum Optics in Garching. The scientists essentially needed a green laser, fast-switching sources for microwaves and radio frequencies, and a highly sensitive detector that is capable of detecting individual light particles.

For the qubit, the researchers used the nucleus of a carbon atom, or to be more precise, the C-13 carbon isotope; its nucleus has a so-called nuclear spin, which generates a magnetic moment. The C-13 nucleus thus behaves like a tiny bar magnet that can align itself parallel or anti-parallel to an externally applied magnetic field. These two states form the “0” and “1” of the qubit.

The information exchange between this qubit and the surroundings is done indirectly: the researchers grew the diamond in such a way that it contains a bit of nitrogen in addition to tiny traces of the C-13 isotope so that some nitrogen atoms are located near a C-13 atom. Moreover, one carbon atom is missing in the nitrogen atom’s direct vicinity. Physicists therefore call this a nitrogen-vacancy centre, or N-V centre for short. The N-V centre also has a spin and thus forms a qubit. The latter can easily be put into a defined quantum mechanical state with the aid of microwave and laser pulses. Furthermore, the information that it carries can be easily read out with a laser beam.

“It is easy to talk to the N-V centre, so to speak, and it therefore serves as an auxiliary qubit,” says Hunger. The N-V centre in turn talks to the nuclear spin of the carbon atom, as the two tiny bar magnets exert an influence on each other. "The quantum state of the carbon nucleus can be indirectly controlled by laser and microwave pulses addressing the N-V center, and additional direct manipulation of the nuclear spin is possible via strong radio frequency pulses; the qubit can thereby be read in. Similarly, it can also be read out via the N-V centre.

The researchers selected the carbon atom rather than the N-V centre as the actual memory location because its atomic nucleus has a comparatively small magnetic moment and thus reacts less sensitively than the N-V centre to environmental influences. C-13 nuclei can therefore potentially store quantum information for a longer time, and are considered to be ideal systems for the storage of quantum information.

Two perturbing influences on the quantum memory must be suppressed

However, one problem is that the coupling to the N-V centre, which is useful for writing and reading out, simultaneously causes the qubit in the C-13 atomic nucleus to lose its information within only a few thousandths of a second. This is because, after the information is read in, the magnetic moment of the N-V centre, which is left to its own devices, jumps to and fro uncontrollably and thereby perturbs the adjacent C-13 qubit, just as a bar magnet constantly turning to and fro induces a similar rocking motion in a neighbouring, much weaker magnet. The magnetic moments of further C-13 nuclei in the diamond crystal influence the magnetic moment of the C-13 qubit in a similar way.

The effects of these two perturbations can be significantly reduced, however, as the researchers have proved. They suppressed the effect of the N-V centre with a green laser beam. This forces the N-V centre into one of the two magnetic states and prevents the natural fluctuation of the magnetic moment. In the process, the laser temporarily knocks an electron out of the N-V centre, which captures it again shortly afterwards. The centre is therefore being constantly ionised and immediately deionised again. This is again associated with the magnetic moment jumping to and fro.

By increasing the laser power to ten milliwatts, the physicists ensured that the magnetic moment changes its orientation much faster than in the original fluctuation. The qubit in the C-13 atomic nucleus therefore no longer experiences different magnetic fields, but rather an average value that is constant in time. This means the fluctuation is switched off. Staying with the bar magnet image: if one bar magnet is turned to and fro much faster than the other one can flip over, it simply remains in its orientation. This method increased the qubit’s lifetime to around half a second.

The scientists used two tricks to minimise the interfering effect of the other C-13 atoms. First, they limited the percentage of the C-13 carbon isotope in their artificial diamond to one hundredth of a percent, whereas natural diamonds contain around one percent of the heavier carbon version. The next magnetic C-13 nuclei in the artificial diamond are therefore farther away from each other than in a natural diamond and correspondingly interfere less with each other. The second trick consisted in neutralising the effects of the remaining C-13 nuclei on the qubit with the aid of cleverly chosen radio frequency pulses. Both methods increased the lifetime of the qubit to around 1.4 seconds.

“The theory says that the lifetime of the qubit can be increased to a maximum of 36 hours,” says David Hunger. “In principle, the current limitations can be pushed back further by improving the technology.” For example, by increasing the power of the green laser, although this would make it necessary to cool the diamond. Moreover, better optimised sequences of the control pulses and a further reduction in the C-13 concentration could increase the lifetime. Challenges that the research team will take on these, according to the physicist.

In addition to quantum memories for credit cards or passports, the researchers envisage that quantum memories could be important in future communication networks based on quantum information. Such a network would be needed for the exchange of information between quantum computers, for example. “The quantum information needs to be stored temporarily on longer paths through such networks,” says Hunger. Diamond crystals, such as the one used in this investigation, could be used for these so-called repeaters. Hunger acknowledges, however, that the miniaturisation of the laser, microwave and radio frequency sources would have to progress significantly to enable applications such as the secure credit card. The read-out technology would also have to become more efficient. But this is only a question of time. [CM]