Flashes of light out of the mirror

A team of the Laboratory of Attosecond physics at the Max Planck Institute of Quantum Optics developed an alternative way of generating attosecond flashes of light.

Electrons at a glass surface send out flashes of light with durations of only a few attoseconds when they come under the influence of high-intensity laser pulses. One attosecond is one part in a billion of one part in a billion of a second. In the electric field of the laser, the electrons at the surface start to oscillate. Hereby the ultrashort attosecond flashes of light are generated. The team at the Laboratory of Attosecond Physics (LAP) at the Max Planck Institute of Quantum Optics (MPQ) in Garching has now advanced this innovative method. It has the potential to replace the current procedure of the generation of attosecond flashes of light. Presently these flashes are generated by electrons in noble gases. But the scientists are sure, that their method of the generation of attosecond flashes of light at surfaces has some advantages (Physical Review Letters, Phys. Rev. Lett. 108, 235003 (2012).

Flashes of light with attosecond duration enable observations in a world yet widely unknown – the microcosm. With their help the first images of the extremely fast motion of electrons became possible. The short bursts of light are usually generated by the use of noble gas atoms. The electrons of these atoms absorb the energy of the laser light and subsequently emit it again in the form of ultrashort flashes of light. It holds: The shorter the burst of light, the sharper the images out of the microcosm.

But there are other ways of generating these short bursts of light. A team at the Laboratory of Attosecond Physics (LAP) at the Max Planck Institute of Quantum Optics (MPQ) in Garching has now advanced one of these methods. The scientists shot a laser pulse with a duration of only 8 femtoseconds and a power of 16 terawatts onto a glass target, which thereby turned into a relativistically oscillating mirror. One femtosecond corresponds to one part in a million of one part in a billion of one second and 16 terrawatt correspond to the power of round about 1000 nuclear power stations. 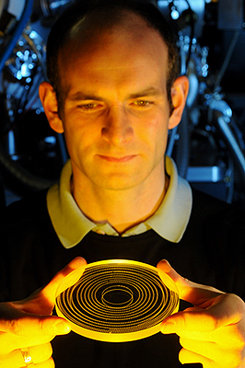 The 8 femtosecond laser pulse consisted of only 3 optical cycles and hence 3 cycles of its electric field. As soon as this electric field hits the glass surface a relativistic plasma forms. This means, that the electrons at the surface are accelerated out of the solid to velocities close to the speed of light and subsequently are decelerated and sent back to the surface again, as soon as the electric field changes its polarization. Thereby the electrons form an oscillating mirror. During the reflection at this moving mirror the pulsed laser light is converted from the near infrared spectral region down to the extreme ultraviolet (XUV, down to a wavelength of 17 nanometer) part of the spectrum. Hereby even shorter flashes of light with a duration in the attosecond regime are generated. These flashes of light occur as isolated bursts or trains of pulses, if filtered appropriately. Comparison with simulations of the method show that the ultrashort flashes of light have durations of around 100 attoseconds.

Compared to the conventional method of attosecond pulse generation these new flashes of light possess a higher number of photons and are hence more intense than their predecessors. This higher intensity allows for the splitting of these isolated bursts into two parts which enables the observation of processes in the microcosm with two attosecond flashes of light. This in turn permits a higher resolution than achievable up to now with the use of an attosecond burst in combination with a longer femtosecond laser pulse. For ultrashort imaging this means that images with a greater richness of detail will become achievable in the future. Thorsten Naeser