Billard game in an atom

Physicists from the Max Planck Institute of Quantum Optics trace the double ionization of argon atoms on attosecond time scales.

When an intense laser pulse interacts with an atom it generates agitation on the micro scale. A rather likely outcome of this interaction is single ionization, where one electron is ejected from the atom. From time to time, however, two electrons can be removed from the atom, resulting in the more complex process of double ionization. The detailed course of this process on attosecond time scales (an attosecond is a billionth of a billionth of a second) has been observed by an international team lead by researchers from the Laboratory for Attosecond Physics at the Max Planck Institute of Quantum Optics in close collaboration with colleagues from the Max Planck Institute for Nuclear Physics. The researchers report on their results in Nature Communications (8th May, 2012).

The process is reminiscent of a billiard game, where, after a collision, a ball brings another one in motion. The so called non-sequential double ionization investigated by the researchers bears many similarities with such a billiard ball collision. The strong laser light first ejects an electron from the atom, accelerates it away from and then back towards the atomic core. During the collision the electron transfers part of its energy onto a second electron, which is promoted into an excited state of the core. A little later, the electric field of the laser pulse also liberates the second electron from the atomic core. The non-sequential double ionization usually consists of many such recollision and excitation events, which hampers the interpretation of experimental results.

Picture 1:Artist's view of non-sequential double ionization. The 3D plots on the circle were obtained from experimental data and show how the velocities of the two electrons change with the electric-field evolution of the ionizing pulse. The plot in the center is the sum of all these single measurements. From these data, the scientists can reconstruct the detailed process of the double ionization. Courtesey of Christian Hackenberger/LMU

In close collaboration with colleagues from the Max Planck Institute for Nuclear Physics scientists from the Laboratory for Attosecond Physics at the Max Planck Institute of Quantum Optics and international collaborators have now succeeded in confining such a non-sequential double ionization to a single recollision and excitation event allowing for tracing this process on attosecond time scales.

To achieve this, the scientists sent a four femtosecond long laser pulse onto argon atoms (a femtosecond is a millionth of a billionth of a second). The light wave of this pulse essentially consisted of two wave maxima and two wave minima, i.e two cycles. Due to the action of the laser field, most atoms were singly ionized. Every thousandth atom, however, underwent non-sequential double ionization: After the ionization of the first electron just after the first wave maximum, it took approximately 1.8 femtoseconds for it to revisit the atomic core and excite a second electron. The electron stayed in the excited state for about 400 attoseconds before the laser field released it from the core just before the second wave maximum. „We were surprised to see that the second electron leaves the atomic core 200 attoseconds before the maximum of the second cycle“, said Boris Bergues, a scientist in the LAP-Team. It was assumed so far that the second electron escapes the atomic core at the maximum of a cycle. 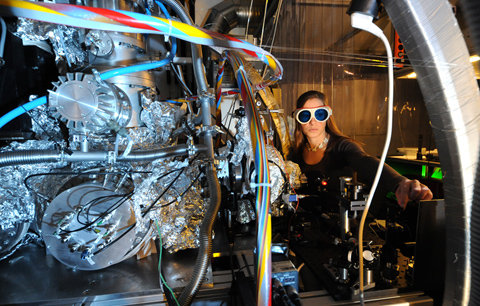 Picture 2:A scientist of the laboratory for attosecond physics working with the COLTRIMS (Cold Target Recoil Ion Momentum Spectroscopy) apparatus, which is used to perform the experiments on double ionization. Courtesey of Thorsten Naeser/LMU

Through their observations, the scientists gave a deep insight into the quantum dynamics of a laser-driven multi-electron system. Following such dynamics on attosecond time scales is essential for refining our fundamental understanding of matter-light interactions. Application of the experimental technique to the study of molecules might shed light, one day, on more complex 'billiard games' played by multiple electrons in the course of chemical reaction. Thorsten Naeser