In future, optical fibers could connect all optical atomic clocks within Europe – a milestone for various users of optical frequencies in research and industry.

Optical atomic clocks measure time with unprecedented accuracy. However, it is the ability to compare clocks with one another that makes them applicable for high-precision tests in fundamental theory, from cosmology all the way to quantum physics. A clock comparison, i.e. a comparison of their optical frequencies, proved to be challenging so far as the few existing optical clocks around the world are not readily portable due to their complex nature. A team of researchers from the Physikalisch-TechnischeBundesanstalt (PTB) in Braunschweig and from the Laser Spectroscopy Division at the Max Planck Institute of Quantum Optics (MPQ) in Garching have now demonstrated an optical frequency transfer with high stability through a standard telecommunication optical fiber network (Science, April 27, 2012). The optical fiber connecting the two institutes was installed below ground and had a total length of 920 kilometers. This demonstration enables the ability to compare optical clocks located far apart from each other and to transmit their stability to distant laboratories where the signals can be used for high precision experiments. At first, fundamental research will benefit from this, e.g. in the precise determination of natural constants, tests of the validity of Einstein’s theory of General Relativity or for predictions in quantum electrodynamics.

In an atomic clock the frequency that an atom emits when changing from one energy level to another defines the unit of time. The unit “second” is the interval occupied by 9,192,631,770 cycles of the microwave radiation corresponding to a transition of the cesium-133 isotope. The generation and dissemination of the second is statutory and in Germany the duty of the PTB. Optical atomic clocks use a frequency that is about 100,000 times higher compared to microwave clocks and thus slice time into much finer intervals. The latest generation of optical atomic clocks differs only in the 18th decimal place – that corresponds to one second in a time period of the age of the universe.

The researchers asked themselves the question of how well one can transfer optical frequencies over long distances. Well established techniques with the help of satellites reach a stability of 15 decimal places. While this is sufficient for microwave signals it is inadequate to exploit the full potential of optical atomic clocks. During the last years the MPQ/PTB researchers therefore investigated how to transmit an optical frequency through optical fibers. They were supported by the Cluster of Excellence QUEST at Leibniz Universität Hannover, the European Space Agency (ESA), the Deutsches Forschungsnetzwerk DFN as well as GasLine, a German consortium of gas distribution companies.

In the project described here the researchers feed light from a highly stable laser with a wavelength around 1.5 micrometers (near infrared) in the optical fiber connecting the laboratories at MPQ and PTB. The optical fiber is commonly used in telecommunication and has an attenuation minimum for light in the near infrared. However, to transmit a signal over a distance of almost 1,000 kilometers it has to be refreshed periodically. For this, novel optical amplifier units have been developed and installed along the entire path of the optical fiber. 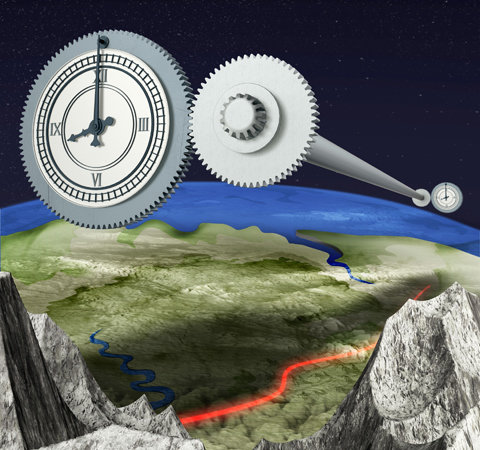 Another problem to overcome is the falsification of the sent laser frequency due to mechanical, acoustic or thermal disturbances that originate from temperature fluctuations, traffic or construction work close to the optical fiber. New techniques allow for detection and compensation of these disturbances in such a way, that the entire 920 kilometers of optical fiber between Garching and Braunschweig is changing its optical length by less than one micrometer in one second. Hence, the delivered frequency of 194,353 Gigahertz at the remote laboratory differs by less than one ten thousandth from the fed frequency. To put the frequency transfer to the test, the researchers of the laser spectroscopy division used the signal from PTB’s primary cesium fountain clock for the spectroscopy of hydrogen at MPQ. By means of a frequency comb, this signal is compared to the optical phase of the transfer laser. They achieved a significantly higher accuracy as would have been possible with satellite-based frequency transfer.

Optical frequencies can now be disseminated with a quality that was only available locally at metrology institutes so far. The use of optical fiber infrastructure that the national research networks provide already today will in future allow for the connection of optical atomic clocks pan-European. In the same way as it is state-of-the-art that conventional alarm or station clocks receive the “correct time” from the PTB via the long-wave transmitter DCF77, the dissemination of an optical reference via optical fibers for the determination of wavelengths or frequencies of optical radiation will find wide application in research and industry.