A team of scientists at the MPQ realizes a first elementary quantumnetwork based on interfaces between single atoms and photons.

Whether it comes to phoning a friend or to using the internet – our daily communication is based on sophisticated networks, with data being transferred at the speed of light between different nodes. It is a tremendous challenge to build corresponding networks for the exchange of quantum information. These quantum networks would differ profoundly from their classical counterparts: Besides giving insights into fundamental questions in physics, they could also have applications in secure communication and the simulation of complex many-body systems, or they could be used for distributed quantum computing. One prerequisite for functional quantum networks are stationary nodes that allow for the reversible exchange of quantum information. A major breakthrough in this field has now been achieved by scientists in the group of Professor Gerhard Rempe, director at the Max Planck Institute of Quantum Optics and head of the Quantum Dynamics division: The physicists have set up the first, elementary quantum network (Nature, DOI: 10.1038/nature11023, 12 April 2012). It consists of two coupled single-atom nodes that communicate quantum information via the coherent exchange of single photons. “This approach to quantum networking is particularly promising because it provides a clear perspective for scalability”, Professor Rempe points out.

Quantum information is extremely fragile and cannot be cloned. In order to prevent alteration or even the loss of the information, it is necessary to have perfect control over all quantum network components. The smallest stationary memory for quantum information is a single atom, and single photons represent the perfect messengers. Efficient information transfer between an atom and a photon, however, requires strong interaction between the two, which cannot be achieved with atoms in free space. Following a proposal from Professor Ignacio Cirac (director at the MPQ and head of the Theory division), the group of Professor Rempe has invested many years working on systems in which single atoms are embedded in optical cavities. These cavities are composed of two highly reflecting mirrors placed at a very short distance. The emission of photons from an atom inside a cavity is directed and can therefore be sent to other network nodes in a controlled way. A photon entering the cavity is reflected between the mirrors several thousand times. In this way, the atom-photon interaction is strongly enhanced, and the atom can absorb the photon coherently and with high efficiency.

The first experimental challenge was to quasi-permanently trap the atom in the cavity. This was achieved via fine-tuned laser beams, meaning the least disturbance of the atom. In the next step, the physicists achieved controlled emission of single photons from the trapped atom. Finally, they could prove that the single-atom-cavity system represents a perfect interface for storing the information encoded in a single photon, and they were able to transfer it onto a second single photon after a certain storage time. The present work is another milestone on the way towards a large-scale quantum network. For the first time, two such systems were connected, and quantum information was exchanged between them with high efficiency and fidelity. The two systems, each representing a network node, are installed in two laboratories separated by 21 metres and are connected via a 60-metre long optical fibre.

Quantum networks exhibit peculiar properties not found in their classical counterparts. This is due to the fundamentally different behaviour of the exchanged information: while a classical bit represents either 1 or 0, a quantum bit can take both values at the same time, a phenomenon called “coherent superposition”. A measurement however projects the quantum bit onto one of the two values. In the single atom, the quantum information is encoded in a coherent superposition of two energy levels. When the atom at node A emits a photon, stimulated by a light pulses from a control laser, its quantum state is mapped onto the polarization state of the photon. Via the optical fibre the photon reaches node B where it is coherently absorbed. During this process, the quantum state originally prepared in atom A gets transferred onto the atom at node B. As a result, A is capable of receiving the next photon, while B is ready to send the stored information back to A or to any other node. It is this symmetric and reversible feature that makes the scheme scalable to arbitrary network configurations, consisting of many atom-cavity nodes. The atomic quantum states are read out by mapping them again onto the polarization of single photons which can easily be measured. “We were able to prove that the quantum states can be transferred much better than possible with any classical network. In fact, we demonstrate the feasibility of the theoretical approach developed by Professor Cirac,” Dr. Stephan Ritter, leader of the experiment, explains. 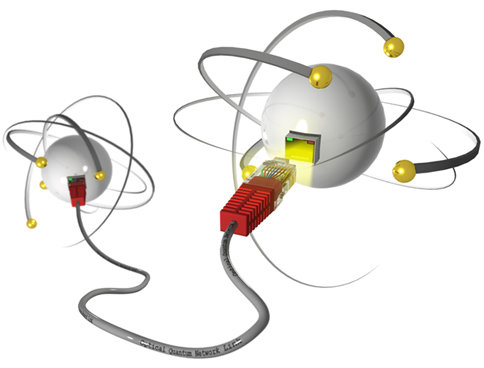 Figure: Single atoms form the nodes of an elementary quantum network in which quantum information is transmitted via the controlled exchange of single photons. (Graphic by Andreas Neuzner, MPQ)

In yet another step the scientists succeeded in generating “quantum mechanical entanglement” between the two nodes. Entanglement is a feature unique to quantum objects. It connects them in such a way that their properties are strongly correlated in a non-trivial way, no matter how far they are separated in space. This phenomenon, predicted nearly a hundred years ago, was dubbed by Albert Einstein (who did not really believe in it) “spooky action at a distance”. In order to achieve entanglement between the two network nodes, the polarization of the single photon emitted by atom A is now entangled with the atomic quantum state. Once the photon gets absorbed, this entanglement gets transferred onto atom B. In fact, this is the first time that entanglement has been created between massive particles separated by such a large distance, making it the world’s “largest” quantum system with massive particles.

“We have realized the first prototype of a quantum network”, Stephan Ritter concludes. “We achieve reversible exchange of quantum information between the nodes. Furthermore, we can generate remote entanglement between the two nodes and keep it for about 100 microseconds, whereas the generation of the entanglement takes only about one microsecond. Entanglement of two systems separated by a large distance is a fascinating phenomenon in itself. However, it could also serve as a resource for the teleportation of quantum information. One day, this might not only make it possible to communicate quantum information over very large distances, but might enable an entire quantum internet.”
Olivia Meyer-Streng