A Traffic Jam of Quantum Particles

Transport properties such as thermal or electrical conductivity are of great importance for technical applications of materials. In particular the electrical conductivity stems from the behaviour of the electrons in the solid and is very difficult to predict. This is true especially in the case of strongly correlated electrons, when the position and the dynamics of each single electron is strongly influenced by the behaviour of all other electrons.

Ultracold atoms in optical lattices can be used as model systems that allow the study of analogues processes in a clean and well controlled environment where all relevant parameters can be manipulated by external lasers and magnetic fields. Scientists in the group of Professor Immanuel Bloch (Ludwig-Maximilians-Universität Munich and Max Planck Institute of Quantum Optics, Garching) in collaboration with the theory group of Prof. Achim Rosch (University of Cologne) have now demonstrated that the dynamics of a system of ultracold potassium atoms, trapped in an optical lattice, depend surprisingly strongly on the particle interaction strength (Nature Physics 8, 213-218 (2012), DOI: 10.1038/NPHYS2205). Investigations of this kind give new insights into properties like electrical conductivity, superconductivity or magnetism, and may help to develop materials with ‘tailored’ properties.

So-called optical lattices are generated by superimposing several laser beams. The resulting periodic structure of light resembles the geometry of simple solid state crystals. In fact, atoms trapped in such an artificial lattice, at a temperature of a few nano-Kelvin above absolute zero, experience forces similar to the ones that act on electrons in solid state systems. However, concerning their dynamics, only fermionic atoms behave exactly the same way as electrons, which are fermions as well. These particles have to differ in at least one quantum property if they happen to be at the same place at the same time. Bosonic particles, on the other hand, prefer to gather in exactly the same quantum state.

In the experiment, atoms of the fermionic isotope potassium-40 are cooled down to an extremely low temperature with the help of laser beams and magnetic fields. Then they are loaded into an optical lattice as described above. Initially, the edges of the egg carton-like lattice structure are bent upwards (see figure 1, the colours red and green represent different spin states of the atoms) and the particles sit in the centre with a constant density distribution. Subsequently, the external confining field – responsible for the upwards bending of the lattice – is suddenly eliminated. The egg carton becomes flat and the particle cloud starts to expand. Now the physicists monitor exactly how the density distribution changes during the expansion.

An important feature of this experimental setup is the use of a so-called Feshbach resonance, which makes it possible to change the interaction between the atoms by magnetic fields almost at will. This holds for the sign – attractive or repulsive – as well as for the strength of the interaction. In fact, the interaction can be switched off completely. In this case the atoms don’t ‘see’ each other. They move through the lattice unhindered, and their velocity depends on the lattice depth only. During this free expansion, the symmetry of the cloud changes from the spherical initial density distribution to a square symmetry that is governed by the symmetry of the lattice (figure 1, left).

As soon as there are small interactions present the atoms collide and ‘hinder’ each other, such that the expansion velocity of the cloud decreases. For larger interactions, more and more atoms ‘remain stuck’ in the core of the cloud, which remains spherical. For very strong interactions the dynamics of the high density core change qualitatively: the essentially frozen core dissolves by emitting particles and therefore shrinks in size, similarly to a melting ice cube (figure 1, right). 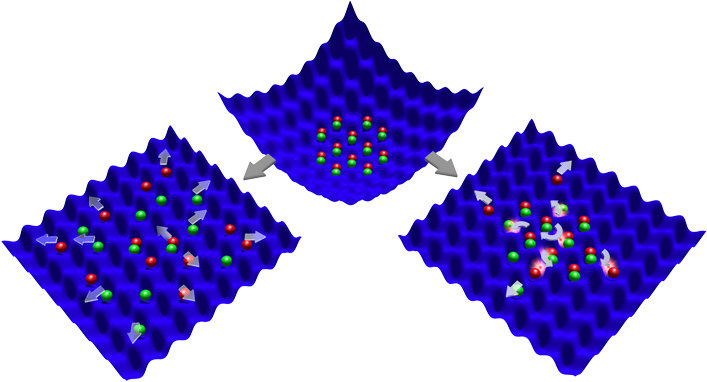 Figure 1: A system of fermionic atoms in an optical lattice (top) is brought out of equilibrium and exhibits different dynamics for non-interacting (left) and interacting atoms (right).

Surprisingly, only the magnitude, but not the sign of the interaction matters. The observed dynamics of the expansion is identical for repulsive and attractive interactions, as long as they are of the same strength. “This symmetry between attractive and repulsive interaction is an interesting feature of these lattice systems,” Dr. Ulrich Schneider, project leader at this experiment, explains. “In free space, interactions with opposite signs would give rise to opposite effects. Here they can lead to a quantum mechanical entanglement of distant atoms and allow the generation of either ‘normally’ or ‘repulsively’ bound particle pairs.”

Former experiments with fermionic atoms in optical lattices focused on the properties of systems in equilibrium. Here, on the contrary, the scientists observe the dynamics of the atoms in an out-of equilibrium system. These measurements are an important step towards a better understanding of the electronic motion in condensed matter. The physicists hope that this knowledge will lead to an explanation of complex phenomena in solid state physics and material science, and consequently to new tailored materials. Olivia Meyer-Streng