A quantum connection between light and mechanics

Researchers at the Ecole Polytechnique Fédérale de Lausanne  and the Max Planck Institute of Quantum Optics have demonstrated a microscopic system in which light can be converted into a mechanical oscillation and back.

February 02, 2012
Researchers at the Ecole Polytechnique Fédérale de Lausanne (EPFL, Switzerland) and the Max Planck Institute of Quantum Optics (MPQ, Garching near Munich) have demonstrated a microscopic system in which light can be converted into a mechanical oscillation and back. This interaction is so strong that it becomes possible to control the motion of the oscillator at the level where quantum mechanics governs its behavior (Nature, 2 February 2012).
Since the early 20th century, it is known that the motion of objects is ultimately governed by the laws of quantum mechanics, which predict some intriguing phenomena: An object could simultaneously be in two places at the same time, and it should always be moving a little, even at a temperature of absolute zero ─ the oscillator is then said to be in its quantum ground state. Yet we never experience such behavior in the things we see around us and interact with in daily life. Indeed, quantum effects can only be observed on very well isolated systems, where the coupling to the surrounding environment is extremely weak. For large objects, the unavoidable coupling quickly washes out the quantum properties, in a process known as decoherence. Until recently, scientists were only able to observe quantum mechanical traits in the motion of tiny systems, such as single atoms or molecules. Now, a team of physicists in the Laboratory of Photonics and Quantum Measurement directed by Prof. Tobias Kippenberg has shown that it is possible to control the motion of an object, sufficiently large to be seen with the naked eye, at the level where quantum mechanics dominates. They achieve this by illuminating the object with laser light.

The structure is a carefully crafted glass donut on a microchip, with a diameter of 30 micrometer (about one half of a hair’s diameter, see Figure 1). Just like a wineglass, it can vibrate at a well-defined frequency. But at the same time, it acts as a racetrack for light, which can circle around the circumference of the donut. In turning the bend, the light exerts a little force on the glass surface, an effect called 'radiation pressure'. Although this force is very small, in these structures it can become appreciable since light circles around the structure up to a million times before being lost. The radiation pressure force can set the ring in motion, causing it to vibrate like a finger running along the rim of a wineglass. But it can in fact also dampen the vibrations, and thus cool down the oscillatory motion.

Cooling is crucial to reaching the regime of quantum mechanical motion, as this is normally overshadowed by random thermal fluctuations. For this reason, the structure is placed in a cryostat that brings it to a temperature of less than one degree above absolute zero. Radiation pressure damping by laser light launched into the donut then cools the motion down by an extra factor of 100. The oscillator is cooled so much that it spends a large fraction of the time in its quantum ground state. But even more importantly: The interaction between light and the motion of the oscillator can be made so strong that the two form an intimate connection: A small excitation in the form of a light pulse can fully transform into a small vibration and back again. For the first time, this transformation between light and motion is made to occur within a time that is short enough such that the quantum properties of the original light pulse are not lost in the process through decoherence. By outpacing decoherence, the current results provide a powerful way to control the quantum properties of the oscillator motion, and see the peculiar predictions of quantum mechanics at play in human-made objects. Moreover, the mechanical oscillators can serve to interface a variety of quantum systems of completely different nature via light in optical fibers. [EV] 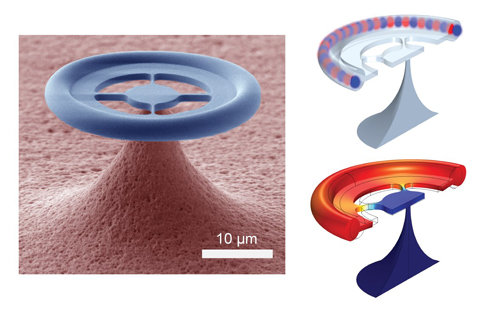 Figure 1. (left) Electron microscopy image of the glass donut, which is smaller than the diameter of a hair. It is connected to the supporting chip by four spokes, to ensure that the structure can vibrate for a long time like a good tuning fork. Light can circulate up to a million times around the circumference of the donut. (right top) As the light bounces against the walls of the structure, it exerts a small force on the glass, which can influence the vibrations of the structure. (right bottom) The structure vibrates in a radial ‘breathing’-like motion, oscillating 78 000 000 times per second. (Picture by EPFL, MPQ)