A light transistor based on photons and phonons

Researchers at the Ecole Polytechnique Fédérale de Lausanne (EPFL) and the Max Planck Institute of Quantum Optics (MPQ) discover a novel way to switch light all-optically on a chip.

The ability to control the propagation of light is at the technological heart of today’s telecommunication society. Researchers in the Laboratory of Photonics and Quantum Measurement led by Prof. Tobias J. Kippenberg (now EPFL) have discovered a novel principle to accomplish this, which is based on the interaction of light (photons) with mechanical vibrations (phonons). As they report in a forthcoming publication (Science Express, November 11, 2010), this scheme allows to control the transmission of a light beam past a chip-based optical micro-resonator directly by a second, stronger light beam. The new device could have numerous applications in telecommunication and quantum information technologies.

So far, this effect has only been observed in the interaction of laser light with atomic vapours, based on an effect referred to as “electromagnetically induced transparency” (EIT). EIT has been used to manipulate light propagation at an impressive level: slowing of light pulses and even full storage has been achieved. However, EIT is restricted to light of wavelengths matching the natural resonances of atoms. Also, these technologies are hardly compatible with chip-scale processing.

The novel principle, discovered by a team of scientists including Dr. Albert Schliesser and Dr. Samuel Deléglise and doctoral students Stefan Weis and Rémi Rivière, is based on optomechanical coupling of photons to mechanical oscillations inside an optical micro-resonator. These optomechanical devices are fabricated using standard nanofabrication methods – drawing on the techniques used in semiconductor integrated circuit processing available in the cleanroom of EPFL. They can both trap light in orbits and act, at the same time, as mechanical oscillators, possessing well-defined mechanical vibrational frequencies just like a tuning fork.

If light is coupled into the resonator, the photons exert a force: radiation pressure. While this force has been used for decades to trap and cool atoms, it is only in the last five years that researchers could harness it to control mechanical vibrations at the micro- and nanoscale. This has led to a new research field: cavity optomechanics, which unifies photonics and micro- and nanomechanics. The usually small radiation pressure force is greatly enhanced within an optical micro-resonator, and can therefore deform the cavity, coupling the light to the mechanical vibrations. For the optomechanical control of light propagation, a second, “control” laser can be coupled to the resonator in addition to the “signal” laser. In the presence of the control laser, the beating of the two lasers causes the mechanical oscillator to vibrate – which in turn prevents the signal light to enter the resonator by an optomechanical interference effect, leading eventually to a transparency window for the signal beam.

For a long time the effect remained elusive, “We have known for more than two years that the effect existed,” says Dr. Schliesser, who theoretically predicted the effect early on. “Once we knew where to look it was right there,” says Stefan Weis, one of the lead authors of the paper. In the subsequent measurements, “the agreement of theory and experiment is really striking”, comments Dr. Deléglise.

In contrast to atoms, this novel form of induced transparency does not rely on naturally occurring resonances and could therefore also be applied to previously inaccessible wavelength regions such as the technologically important telecommunication window (near-infrared). Optomechanical systems allow virtually unlimited design freedom using wafer-scale nano- and microfabrication techniques. Furthermore, already a single optomechanical element can achieve unity contrast, which in the atomic case normally not is possible.

The novel effect, which the researchers have termed “OMIT” (optomechanically induced transparency) to emphasize the close relation to EIT, may indeed provide entirely new functionality to photonics. Future developments based on OMIT could enable the conversion of a stream of photons into mechanical excitations (phonons). Such conversion of radio frequency signals into mechanical vibrations is used in cell-phone receivers today for narrow-band filtering, a principle that could potentially be applied to optical signals as well.

Furthermore, using OMIT, novel optical buffers could be realized that allow storing optical information for up to several seconds. Finally, with research groups all over the world reaching for control of optomechanical systems at the quantum level, the switchable coupling demonstrated in this work could serve as an important interface in hybrid quantum systems. 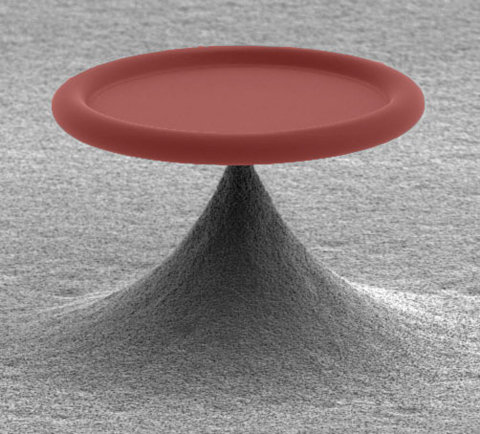 Figure 1: False-colour scanning electron micrograph of the micro-resonator used in the study of OMIT. The red top part is a silica toroid; it is supported by a silicon pillar (gray) on a semiconductor chip. The silica toroid serves both, as an excellent optical resonator for photons, and it supports mechanical vibrations (phonons). The mutual coupling of photons and phonons can be harnessed to control the propagation of light all-optically. 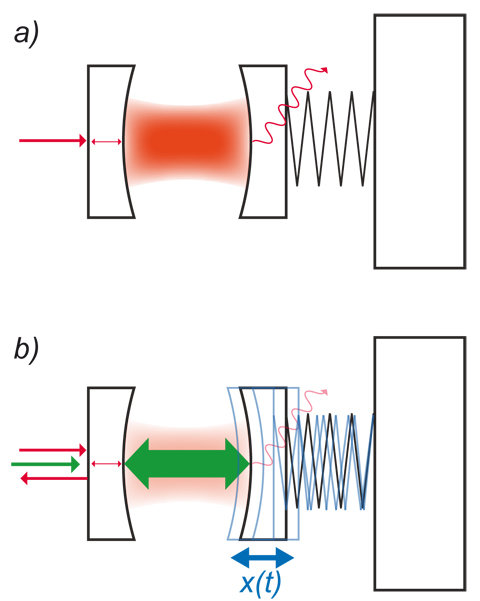 Figure 2: Principle of optomechanically induced transparency (OMIT). a) The signal laser (red beam), incident on the cavity, gets coupled into the resonator, and gets dissipated there. No light is returned from the system. b) In the additional presence of a control laser (green beam), the radiation pressure of the two beams drives the boundary of the cavity into resonant oscillations, preventing most of the signal beam to enter the cavity by an interference effect. In this case, the signal beam is returned by the optomechanical system.