MPQ-scientists demonstrate the feasibility of optical trapping for ions, which may lead to a new kind of hybrid quantum systems.

In the past decades setups for trapping single particles have played a key role in high precision quantum measurements because they allow for an ultimate control of all important experimental parameters. However, up to now scientists had to choose between two alternative strategies: either to capture charged atoms (i.e. ions) in strong radiofrequency fields, or to keep neutral atoms in place by light fields. Dr. Tobias Schätz, leader of the Emmy-Noether-Research Group Quantum Simulations at the Max Planck Institute of Quantum Optics, and his team have now demonstrated the possibility of combining both methods as well as both kinds of particles (Nature Photonics, AOP, 24.10.2010, DOI 10.1038/NPHOTON.2010.236): they succeeded to store an ion in an optical trap for the first time. Their experiment opens new perspectives, for example for using controllable quantum systems in the simulation of condensed matter properties. At the same time completely new experimental possibilities may arise in the field of ultracold chemistry.

Experimental quantum simulations are based on the principle of modeling a complex many-body system (e.g. a metallic solid state), whose quantum properties are neither understood nor controllable, by yet another system which allows the study of analogue properties under precisely defined conditions. These model systems can be realized in different ways. Most promising are systems based on ions sitting in radiofrequency traps, and systems made of neutral atoms stored in light fields. A special case of the latter is an optical lattice which is created by overlapping laser waves in a way that a periodic pattern of bright and dark areas emerges. For about three decades these “crystals of light” have shown to be a very useful tool for manipulating and controlling ultracold neutral atoms.

The decision to exploit which kind of particles strongly depends on the question under investigation. One of the topics the group of Dr. Schätz is very interested in is quantum properties of magnetic matter. Magnetism of a solid state can occur when the individual elemental atoms carry an angular momentum, a so-call spin. Depending on external conditions the interaction of each two spins makes them to align either parallel or antiparallel, thus eventually leading to ferromagnetic or antiferromagnetic (in the latter for uneven spin numbers even “frustrated”) states. The investigation of the quantum dynamics of these states may make a contribution to a better understanding of high-temperature superconductivity. For the analogue simulation of spin-spin-interaction and its consequences ions are their preferred candidates because the Coulomb-force between neighbouring ions is much stronger than the interaction of neighbouring atoms in an optical lattice. Experimental quantum simulations with ions therefore could take a much shorter time than in the case of atoms whereby the influence of external fields would get largely reduced.

Because of their electric charge ions are also most easily to influence by external electromagnetic fields. Hence physicists have used the method of trapping ions with alternating radiofrequency fields by now for more than sixty years. Meanwhile storage times of up to several months are achieved. However, these systems suffer from a severe drawback: it is very difficult to scale them to larger architectures, which limits the possibilities of performing quantum simulations with sufficiently many ions. So, what is the reason that up to now optical lattices have not been used as an alternative for storing ions?

„Optical fields are disfavoured because they don’t allow for potential wells nearly as deep as they are guaranteed by radiofrequency fields”, Dr. Schätz explains. “At the same time ions react in a very sensitive way to external stray fields. This has caused the widely believed prejudice that optical potentials are too shallow and therefore unable to trap ions. But, as a matter of fact, we were able to experimentally demonstrate that ions can indeed be trapped by the interaction with light.

The scientists start their experiment with cooling a single magnesium ion down to a few thousandths of a degree above absolute zero temperature. In the next step external stray fields are compensated for by appropriate “counter fields”. Then a strongly collimated laser beam is turned on while the radiofrequency field gets switched off. According to a series of measurements the ion was kept in place for several milliseconds. This corresponds to a couple of hundred oscillations of the ion in the potential well, despite its relatively shallow shape. 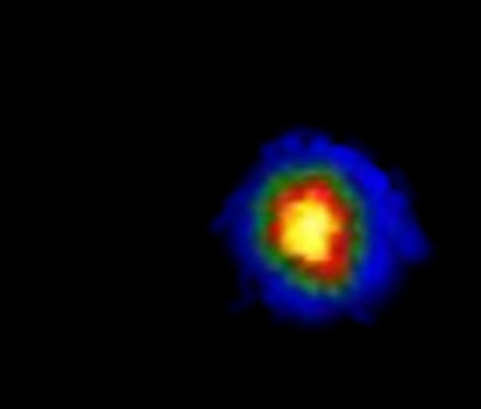 Image of a single ion that had been trapped in an optical potential. The colours encode the intensity of its emitted fluorescence light.

Tobias Schätz does not seem to be awfully surprised by this change of paradigm. “In principle, both traps, the radio frequency as well as the optical, work the same way: they capture the particle by a fast changing electromagnetic field.” At present the lifetime of the ion in the optical trap is only limited by heating which is caused by scattering light of the optical field. It could be largely improved with state-of-the art techniques.

Once it was possible to extend the principle of optical trapping as demonstrated in this experimental approach to a large number of ions in an optical lattice a completely new class of experiments could be carried out. Besides simulating complex spin-systems, hybrid quantum systems could be developed which combine ions and atoms in a common optical lattice with the quantum particles “sharing” the excess charges.

There are also intriguing possibilities for investigating chemical reactions at extremely low temperatures. If, for example, a single ion was embedded in a cold atomic quantum gas (a so-called Bose-Einstein condensate) in a common optical trap, the particles would – due to their very low kinetic energy – spend so much time together, that novel chemical reactions caused by quantum mechanical tunneling might evolve. Hence this experiment is both the beginning of a new generation of quantum simulations and of a new era of ultracold chemistry. Olivia Meyer-Streng