For the first time ever, physicists from the Laboratory for Attosecond Physics (LAP) at the Max Planck Institute of Quantum Optics have observed what occurs inside an atom from which a single electron has been ejected.

An international team from the Laboratory for Attosecond Physics (www.attoworld.de), led by Prof. Ferenc Krausz at the Max Planck Institute of Quantum Optics and the Ludwig-Maximilians-Universität in Munich, in collaborations with researchers from the United States and Saudi Arabia, have observed, for the first time, the quantum-mechanical behaviour occurring at the location in a noble gas atom where, shortly before, an electron had been ejected from its orbit. They report their findings in Nature, 5th August 2010 (Doi:10.1038/nature09212). The researchers achieved this result using light pulses which last only slightly longer than 100 attoseconds.

Quantum particles, such as electrons, are volatile entities, governed by the laws of quantum mechanics. Movements of electrons in their atomic orbitals last for just a few attoseconds. One attosecond is one billionth of one billionth of a second. What exactly the elementary particles do in the atoms’ atmosphere is, currently, largely unknown. It is, however, clearly understood that one cannot determine both the momentum and location of a particle at the same time. Consequently, the quantum mechanical motion of these elementary particles can be described in terms of a cloud called the “probability density of the particles” subject to rapid pulsation following an excitation.

Now, for the first time, the international team from the Laboratory for Attosecond Physics (LAP) have succeeded in observing how an electron cloud moves with time when one of the electrons in an atom is ejected by a pulse of light. The research collaboration included physicists from the Max Planck Institute of Quantum Optics at Garching, the Ludwig-Maximilians-Universität in Munich, the King Saud University in Riyadh (Saudi Arabia), the Argonne National Laboratory (U.S.) and the University of California, Berkeley (U.S.).

In their experiments, the physicists allowed laser pulses in the visible range of the spectrum to encounter krypton atoms. The light pulses, with a duration of less than four femtoseconds, in each case ejected an electron from the outer shells of the atoms (a femtosecond is one millionth of one billionth of a second).

The physicists could now directly observe, and virtually photograph, this pulsation using a second ultraviolet light pulse, lasting only some 150 attoseconds. It turned out that the position of the hole inside the ion, i.e., the positively charged location, moved back and forth between an elongated, club-like shape and a compact, contracted shape, with a cycle period of only around 6 femtoseconds. “Thus, for the first time ever, we succeeded in directly observing the change occurring in the charge distribution inside an atom,” explains Dr. Eleftherios Goulielmakis, research group leader in the team of Prof. Krausz.

“Our experiments have given us a unique real-time view of the micro-cosmos,” explains Ferenc Krausz. “Using attosecond light flashes, we have for the first time recorded quantum- mechanical processes inside an ionised atom.” The findings of the LAP researchers help one to understand the dynamics of elementary particles outside of the atomic nucleus. In more complex (molecular) systems this kind of split-second dynamics is primarily responsible for the sequence of biological and chemical processes. A more precise understanding of this dynamics could in the future lead to a better understanding of the microscopic origin of currently incurable diseases, or to a gradual acceleration in the speed of electronic data processing towards the ultimate limit of electronics. Thorsten Naeser

Figure: A sequence of snapshots showing the oscillatory motion of a valence electron inside an atomic ion, as reconstructed from attosecond measurements. Courtesy of Dr. Christian Hackenberger/LMU 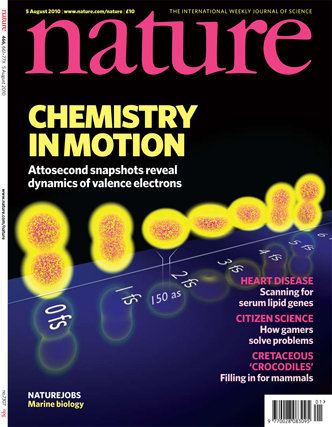 Nature features the article on its cover with the following description: Chemical reactions are triggered by the dynamics of valence electrons in molecular orbitals. These motions typically unfold on a sub-femtosecond scale and have eluded real-time access until recently, when attosecond spectroscopy (an attosecond is 10-18 seconds) – first applied to tracking electronic transitions from one quantum state to another – has now been extended to follow hyperfast (sub-femtosecond) motion of electron wavepackets in the valence shell — the bond-forming electrons — of krypton ions. This first proof-of-principle demonstration uses a simple system, but the expectation is that attosecond transient absorption spectroscopy of this type will ultimately reveal the elementary electron motions in molecules and solid-state materials that determine physical, chemical, and biological properties. The cover depicts a sequence of snapshots of the oscillatory motion of a valence electron inside an atomic ion, reconstructed from attosecond pump-probe measurements.  Credit: Dr. Christian Hackenberger, Ludwig-Maximillians University, Munich, Germany