An international team from the Attosecond Physics Laboratory at the Max Planck Institute of Quantum Optics in Garching has discovered a time delay when using light pulses to eject electrons from atoms.

This led to the measurement of the shortest time observed in nature to date, reported in Science magazine, 25 June 2010, DOI: 10.1126/science.1189401. When light is absorbed by atoms, the electrons become excited. If the light particles, so-called photons, carry sufficient energy, the electrons can be ejected from the atom. This effect is known as photoemission and was explained by Einstein more than hundred years ago. Until now, it has been assumed that immediately after the impact of the photons the electrons start moving out of the atom. This point in time can be detected and has so far been considered as coincident with the arrival time of the light pulse, i.e. with “time zero” in the interaction of light with matter. Using their ultra-short time measurement technology, physicists from the Laboratory for Attosecond Physics at the Max Planck Institute of Quantum Optics (MPQ), the Ludwig-Maximilians-Universität in Munich (LMU) and the Technische Universität München (TUM), along with their collaborators from Austria, Greece, and Saudi Arabia, have now tested this assumption. Their measurements revealed that electrons excited simultaneously by a light pulse from different atomic orbitals leave the atom with a small but measurable time delay of about twenty attoseconds. One attosecond is one billionth of one billionth of a second. These new findings contradict the earlier assumption that the electrons leave the atom immediately after the light pulse has hit. The 25 June issue of Science magazine features these spectacular scientific insights on its cover.

At the beginning of the last century, physics was revolutionised by the discovery of the photoelectric effect. This was the birth of quantum mechanics. Even today, the excitation and photoemission of electrons from atoms by light remains one of the most important phenomena of quantum physics. Until now, it was assumed that the electron is released by the atom without delay following absorption of a light particle (photon).

Now, however, a team of physicists from the Laboratory for Attosecond Physics (LAP) of MPQ and LMU, led by Prof. Ferenc Krausz, along with collaborators from Austria, Greece, and Saudi-Arabia, has ascertained that electrons found in different orbitals within the atoms of the noble-gas neon leave the atom only after a finite time delay.

In their experiments the physicists fired pulses of near-infrared laser light lasting less than four femtoseconds (10-15 seconds) at the noble-gas atoms. The atoms were simultaneously hit by extreme ultraviolet pulses of a duration of less than 200-attoseconds, liberating electrons from their atomic orbitals. The attosecond flashes ejected electrons either from the outer 2p-orbitals or from the inner 2s-orbitals of the atom. With the controlled field of the synchronised laser pulse serving as an “attosecond chronograph”, the physicists then recorded when the excited electrons left the atom.

The measurements revealed that, despite their simultaneous excitation, the electrons left the atoms with a time offset of around 20 attoseconds. “One of the electrons leaves the atom earlier than the other. Hence we were able to show that electrons “hesitate” briefly after excitation by light before they leave an atom,” explains Dr. Martin Schultze, a post-doc in the LAP team.

Determining the cause of this hesitation was also a challenge to the LAP theorists around Dr. Vladislav Yakovlev and his colleagues from the Vienna University of Technology (Austria) and the National Hellenic Research Foundation (Greece). Although they could confirm the effect qualitatively using complicated computations, they came up with a time offset of only five attoseconds. The cause of this discrepancy may lie in the complexity of the neon atom, which consists, in addition to the nucleus, of ten electrons. “The computational effort required to model such a many-electron system exceeds the computational capacity of today’s supercomputers,” explains Yakovlev.

Nevertheless, these investigations already point toward a probable cause of the “hesitation” of the electrons: the electrons interact not only with their atomic nucleus, but they are also influenced by one another. “This electron-electron interaction may then mean that it takes a short while before an electron that is shaken by the incident light wave is released by its fellow electrons and allowed to leave the atom,” Schultze and Yakovlev agree.

“These to-date poorly understood interactions have a fundamental influence on electron movements in tiniest dimensions, which determine the course of all biological and chemical processes, not to mention the speed of microprocessors, which lie at the heart of computers”, explains Ferenc Krausz. “Our investigations shed light on the electrons’ interactions with one another on atomic scale“. To this end, the fastest measuring technique in the world is just about good enough: the observed 20-attosecond time offset in the ejection times of electrons is the shortest time interval that has ever been directly measured. Thorsten Naeser

Attosecond experimental chamber: The photoemission of electrons by an attosecond light pulse (blue beam) is time resolved by controlling the electron motion with an ultrashort visible laser pulse (shown as red beam). This attosecond streaking uncovers that electrons from different atomic orbitals are released with a delay comparable to the atomic unit of time. 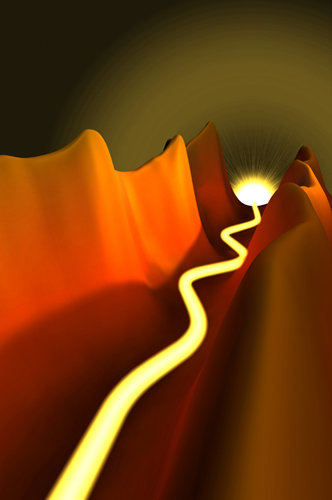 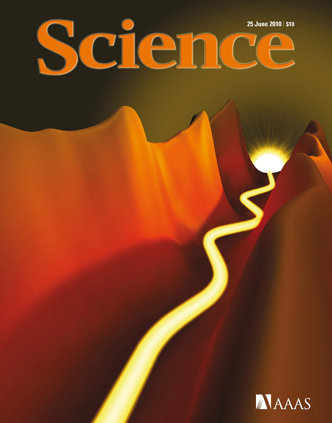 Science features the article on its cover with the following description:Three dimensional representation of the emission of electrons from a neon atom upon absorption of a photon from an attosecond extreme ultraviolet pulse. The orange surface plot represents the resulting electron energy distribution, which, when probed by an ultrashort light wave (yellow line), reveals an unexpected time delay between the emission of electrons from different atomic orbitals.