The renowned scientific journal Nature has declared that the controlled production of attosecond pulses was a historic turning point in photonics.

It is a field that has moved beyond its infancy. The physics of ultra-short light pulses continues to go through a period of rapid development, which began in 2001 when a team headed by Prof. Ferenc Krausz was able, for the first time ever, to generate controlled light pulses which lasted for just a few attoseconds. One attosecond is 1 billionth of 1 billionth of a second. With this technology it is now possible to almost “photograph” the breakneck movements of electrons. As a result one can gain insight into the so-far largely unknown universe of elementary particles and hence an insight into the fundamental processes of nature. The scientific journal Nature has now selected attosecond physics as one of the most significant milestones in photonics (Nature Milestones: Photons, 1 May 2010).

In 2001, Ferenc Krausz and his team at the Technical University of Vienna created the starting point for attosecond spectroscopy. Using light pulses that flashed for approximately 650 attoseconds only, they “photographed” the emission of an electron. The next step was taken a short while later by physicists working with Theodor Hänsch at the Max Planck Institute of Quantum Optics in Garching: the controlled production of identical 250 attosecond pulses in the soft X-ray region.

This event has now been taken up by the editorial staff of the scientific journal Nature in connection with the 50th anniversary of the invention of the laser. In a special magazine supplement, the editors have published a review of the 23 most important events involving research into light. Alongside the invention of solar cells and CCD chips, the generation of attosecond light pulses in 2001 is also cited, together with the subsequent application of them in the investigation and control of electron movements.

Attosecond technology has made it possible for the first time to observe and control electronic processes, explains Magdalena Helmer, an editor at Nature, in appraising the importance of this milestone of laser science. She also remarked that with just 10 years of the new millennium behind us, attosecond physics has already taken on an enormously important role.

Since 2003, Ferenc Krausz has been the Director at the Max Planck Institute of Quantum Optics and has held a chair at the Ludwig-Maximilians-Universität in Munich. Under his leadership, physicists in the Laboratory for Attosecond Physics have managed to produce light flashes with an approximate duration of just 80 attoseconds. The continued shortening of the light flashes plays an important role in the observation of electrons. “The shorter the flashes, the sharper are the images of electrons being produced,” Krausz explains.

Alongside their use in research into the fundamental processes of life, the revolutionary findings of attosecond physics will contribute to the development of innovative technologies in, say, medicine, for instance in the diagnostics and treatment of previously incurable diseases. “Attosecond technology also provides us with the opportunity to take data processing to its ultimate limit. Computational operations could finally be carried out at the enormously high frequency of optical oscillations,” Ferenc Krausz adds. Thorsten Naeser 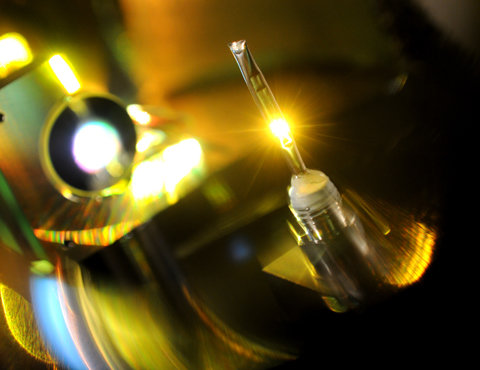 A noble gas flows out of a small nozzle in the foreground and converts the laser pulses into attosecond light flashes. (Photo by: Thorsten Naeser) 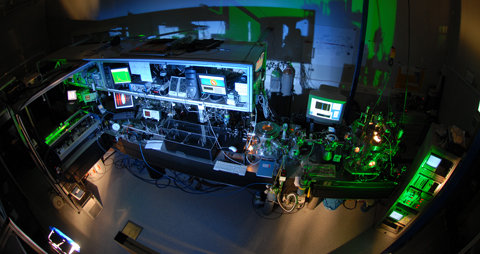 On the AS1 beamline, Prof. Ferenc Krausz and his team at the Vienna University of Technology managed to produce attosecond light flashes for the first time in 2001. (Photo by: Thorsten Naeser)