Beyond the Quantum Limit

MPQ-LMU scientists create multi-particle entanglement of atoms in a Bose Einstein condensate on a microchip.

The microcosm, the realm of quantum physics, is ruled by probability and chance. The behaviour of quantum particles cannot be predicted with certainty but only with certain probabilities given by quantum physics. This results in a so-called quantum noise, which fundamentally limits the precision of the most refined atomic clocks and interferometers. The solution to this problem is the use of entangled atomic systems. A break-through has now been achieved by a team around Professor Theodor W. Hänsch and Professor Philipp Treutlein (Ludwig-Maximilians-Universität Munich and Max Planck Institute of Quantum Optics in Garching, Philipp Treutlein is Professor at the Universität Basel since February 2010). For the first time the scientists succeeded in generating multi-particle entanglement on an atom-chip (Nature, Advance Online Publication, DOI: 10.1038/nature08988). This technique opens a way to significantly enhance the precision of chip-based atomic clocks or interferometers and could also form the basis for quantum computers on microchips. The Munich experiments have been carried out in cooperation with theoretical physicists around Dr. Alice Sinatra from the Ecole Normale Supérieure (ENS) in Paris.

Entanglement is one of the most fascinating phenomena of physics. Once two particles are prepared in an entangled state, they loose their individuality and have to be treated as one single system. Whatever happens to one of the particles it will have an instantaneous impact on the other one, independent of the distance between the particles. Already 80 years ago Albert Einstein dubbed this phenomenon which contradicts every intuition ‘spooky action at a distance’. Entanglement is a strict consequence of quantum theory, yet it was not before the last decade of the twentieth century that entangled states of atoms could be experimentally generated and verified. This opened up the possibility to not only get a better understanding of this mysterious phenomenon but also to make use of it for technical applications such as communication, metrology and computing.

In the experiment described here the Munich group succeeded for the first time to generate entanglement on an atom chip. An atom chip is a microstructured chip that is able to store and manipulate single atoms or atomic clouds. Atom chips have already shown to be versatile tools, both for the study of fundamental problems of quantum physics and for a number of interesting applications. For instance, a chip-based atomic clock, which is suitable for portable use, has been developed using this technology. However, up to now no method existed to generate entanglement on a chip. And as long as atomic clocks run with atoms that are independent of each other, their precision will be limited by the fundamental quantum noise.

Two years ago the theoretical physicists Alice Sinatra and Li Yun developed, in cooperation with the group of Philipp Treutlein, a concept how to suppress this quantum noise. The experiment starts with trapping a cloud of rubidium atoms on the chip and cooling it down to less than a millionth of a degree above absolute zero. At these temperatures the atoms form a Bose-Einstein condensate (BEC), a new state, in which all the atoms are in the same well-defined quantum state. The rubidium atoms can be described by a so-called spin, which can be oriented either upwards or downwards. The ground state of the atoms in the BEC corresponds to a downwards oriented spin. A microwave pulse which is applied to the BEC now rotates the spins such that each atom is in a superposition of both spin states.

The BEC is then exposed to a state-dependent potential which is exerted by a second microwave field. “Under the influence of this field the atoms are only allowed to collide with atoms of the same spin state. Therefore the dynamic evolution of their states depends on the states of all other atoms. This effect leads to an entanglement of the atoms”, explains Max Riedel, doctoral student at the experiment.

In a measurement on a BEC of non-entangled atoms, on average half of the atoms are found in the ground state (spin downwards), the other half in the excited state (spin upwards). “Deviations from this mean value that occur from measurement to measurement, lead to a quantum noise that is evenly distributed among the spin components orthogonal to the mean spin”, adds Pascal Böhi, another doctoral student.

In order to investigate the influence of the state-dependent potential on the quantum noise the scientists determined the noise for each spin component using yet another microwave pulse. As they could clearly demonstrate, for one spin component the noise could be “squeezed” below the limit given by the Heisenberg uncertainty relation. From the observed noise reduction the scientists concluded that inside the BEC clusters of at least four atoms are entangled.

Using entangled ensembles of atoms the precision of atomic clocks could be increased significantly. Further applications include highly sensitive atom interferometers for the detection of extremely weak forces and the realisation of a quantum gate, a key element in future quantum computers. But the scientists also hope to get a deeper understanding of the processes that lead to quantum correlations in quantum many body systems. 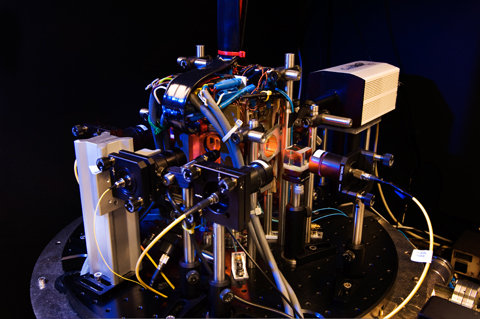